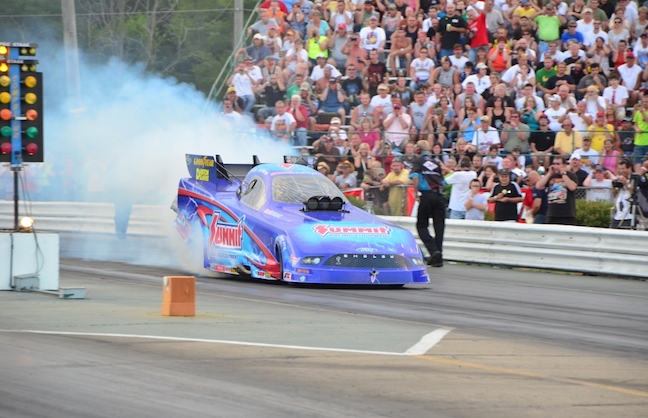 Cordova International Raceway hosts about 120 events each year, with its marquee IHRA NitroJam and the sanctioning body's World Series of Drag Racing.

With financing of $50-plus million from TPG Specialty Lending, IRG Sports + Entertainment was able to pay off current debt, buy two more racetracks and put $10 million into capital improvement. Jason Rittenberry, IRG president and CEO, said the new credit facility is a small percentage of equity but mostly new debt for the $45-million private enterprise.

It takes IRG a long way down the road to a longterm goal of owning 10 venues and touring 20 events, including “expanding the NitroJam Drag Racing Series we bought from Feld. We just announced our schedule for 2015 and we have 13 national events,” Rittenberry said. “We may even add to the 2015 schedule. Our goal is to grow that series to 20 events and for us to own half of the venues on those tours – 10 venues with 20 events. We might start additional tours, but 20 dates is max for a series. We’ll go from Edmonton to the Bahamas, two Canadian dates, nine in the U.S. and one in the Bahamas.”

IRG is also doing due diligence on two other national touring shows it may acquire and fold into its portfolio. “Some of those we already run at our tracks. Our ultimate goal, growth and potential for profit is owning the content and the venue. We are not depending on someone else for content. Owning the venue and content is our opportunity for profit,” Rittenberry said.

The new credit facility will be used to close on the acquisition of Cordova (Ill.) Dragway Park that was announced in late 2013 and to purchase another track, to be announced the second week in November after that track’s signature event concludes. IRG also has a contract on a third venue and is trying to move forward, but does not yet have the funding. “We’re talking to the same lender about adding that,” Rittenberry said.

With Cordova and the track to be named, IRG owns five tracks, with a sixth in the immediate future.

Cordova Dragway Park has been owned by three families over 60 years. With the new ownership, the facility will now undergo about $500,000 worth of upgrades including grinding and repaving the track, putting in new grandstands that add about 2,000 seats, and repaving the pit roads. Upgrades will come in two phases around the April-October season.

“We were more of a ‘mom and pop’ place before, and now IRG has given it that corporate edge and the resources to take the track to the next level,” said current GM Laura Gardner, who will transition into a position in Human Resources with IRG Sports + Entertainment soon. Bobbi Jo Cox, who has been working at the track since she was 13, will take over as general manager. “There’s not a lot of panic for the racers because it will still feel like the same family-owned track.”

Gardner said that she and her husband Scott Gardner, who was named president of International Hot Rod Association last year, weren’t necessarily looking to sell the track. When her husband took the job at IRG, he realized that he wouldn’t have enough time to both run the track and serve as president of the sanctioning body, so selling the track to the larger corporation became part of the longterm plan.

IRG’s main competition is the National Hot Rod Association. There are only two sanctioning bodies in the drag racing world and “we compete at every level – for tracks we own – they own six, we own six. They have 24 national events and we have only13, so we’re behind on the national event tours, but we don’t want to get past 20. We’re in all different markets. We never go head to head with them in any market,” Rittenberry said.

Both are sanctioning bodies. IRG’s sanctioning arm is the International Hot Rod Association. When IRG bought the IHRA from Feld Entertainment about two years ago, it had 89 racetracks, and the NHRA had 119 racetracks. “As of this week, it’s 106 to 111. We’re five tracks away from overtaking them on the sanctioning body,” Rittenberry said.

“We don’t want to take over, but we do want to be the biggest and we think we’ll do that by the first quarter of next year,” he added of the IHRA. “The season is almost over. November-January we’ll be beating the streets and getting them to make changes.” Sanctioning agreements are usually three years.

“We are in the venue business first and foremost. The majority of our revenues come from the venues that we run,” he said. “When I got to Palm Beach [Fla.] in January 2010 we had one venue doing $4 million. From January 2010 to October 2014 we’ve gone from a $4-million company to $45-million company. We are profitable.”

That’s why taking on a $50-plus million loan, which “is a lot of money,” fits into IRG’s plan to grow rapidly.

Dale Gann, GM at Palm Beach International Raceway, said that the financing deal will allow for much-needed improvements at the facility that have been in the works for many years. The track was reopened about six years ago after an investment to redo the drag track and road course. The plans for that round of improvements had included some infrastructure upgrades, which didn’t end up being within budget, so the venue has been running off of well, septic and port-a-potties for the last five years.

The latest investment will bring in city water and sewers for the facility as well as build new concession stands, bathrooms and merch buildings with a clubhouse for Palm Beach Driving Club and corporate rentals. The 40,000-sq.-ft. addition and other improvements is scheduled to begin in March, with about six months of construction time.

“It’s certainly not a cheap endeavor,” said Gann, who added that the water project alone will cost more than $5 million, “I can’t even put into words how exciting it will be to not have to deal with port-a-potties or wells any more.”’ The facility also has some backing from North Palm Beach County Improvement District for the water portion of the project. Additional construction and improvements will run more than $6 million.

The new building will also add about 2,000 grandstand seats.

Gann calls 2015 a “building year” and is preparing to spend about half of his time on project management, with the facility “coming out strong in 2016.” He hopes to increase the number of events on the drag strip by about 50 events per year and increase road course events from about 212 to 250.

IRGSE Productions, with subsidiary IHRA Productions, was launched this year to produce the Nitro Jam Drag Racing Series television show for MAVTV. This new show will debut on the automotive network on Nov. 6, 2014 as a 13-week series.

The $10 million in capital improvements, with the majority scheduled to be completed in time for the 2015 racing season, include:

In addition to providing financing to the Company, TPG Specialty Lending will join IRG principals Joseph Lubeck, Michael Dezer and the DeBartolo family, along with Rittenberry and Murray Schwartz of Karlinsky LLC of New York, on the Board of IRG.