Designer of branded spaces at venues is company’s latest addition

Elevate Sports Ventures has acquired Infinite Scale, a leading designer of branded spaces at sports venues and events over the past 20 years. The transaction strengthens both firms as Elevate continues to expand and diversify its services in facility development.

Infinite Scale’s three partners remain with the company, and Infinite Scale as a brand remains intact, said Molly Mazzolini, a partner and brand integration director. Infinite Scale has 21 full-time employees in Cincinnati, Dallas and Salt Lake City, where the firm opened a new headquarters office in 2019.

“We’re keeping our name,” Mazzolini said. “For the three of us, we wanted the legacy of Infinite Scale to live beyond us. It’s bigger than we could have ever imagined, and we wanted it to continue under Elevate. We’ve seen a lot of our counterparts in this industry that are doing what we do, creative service, literally close shop. We want the project life cycle to be longer and our clients to have the best possible dedicated team working with them.”

On its own, Infinite Scale has taken on dozens of big league and college clients since Mazzolini and business partners Amy Lukas and Cameron Smith founded the company in 2002 after working together at the 2002 Winter Olympics in Utah.

Allegiant Stadium and Las Vegas Ballpark in Las Vegas and Chase Center in San Francisco, all of which have opened over the past two years, are examples of Infinite Scale’s recent projects.

The firm’s imprint in sports extends to developing pandemic-era spaces such as the NHL’s bubble formats in Edmonton and Toronto in 2020 and the league’s outdoor hockey events this past February in Lake Tahoe, Nevada.

Competitors include Dimensional Innovations, Advent and Forty Nine Degrees, plus branding groups within sports architecture firms such as Populous and HKS.

Infinite Scale already had a broad reach across the sports landscape and now adds support with Elevate, a company backed by some heavy hitters in the industry as it adds another piece to its 360-degree venue development model. In March, the agency acquired Dynamic Pricing Partners, a ticket analytics firm.

Elevate Sports Ventures was founded in 2018. Its investors are Harris Blitzer Sports and Entertainment — owner of the Philadelphia 76ers, New Jersey Devils and Prudential Center — and Live Nation/Ticketmaster, plus OVG and the 49ers.

The Elevate-Infinite Scale merger grew from the strong relationship Infinite Scale forged with the 49ers at Levi’s Stadium. Al Guido, president of the 49ers, holds the title of chairman and CEO of Elevate Sports Ventures.

Infinite Scale designed spaces for corporate sponsors, wayfinding and concessions at Levi’s Stadium for its opening in 2014 and has done additional work as new 49ers partners come on board at the stadium.

Its work there extends to the Pac-12 Football Championship, held at Levi’s Stadium from 2014 through 2019.

“It was at the 2019 Pac-12 championship at Levi’s Stadium that conversations started to get a little more serious and strategic collaboration in terms of the creative piece and filling that gap with Elevate,” Mazzolini said.

Elevate President Chip Bowers has known Mazzolini since 2008, when he worked for the Orlando Magic. They met at an industry conference, and since that time, Bowers has kept track of Infinite Scale’s growth, He took notes on how its principals managed business at a high level with many team owners, athletic directors and league offices.

Together, Elevate plans to bring Infinite Scale to the table on the ground floor of venue development a bit earlier in the process with Elevate clients to help form branded destinations at arenas and stadiums, Bowers said.

“Molly has such a great reputation and rapport in the marketplace” he said. “The deal is a no-brainer as we think about how to scale our business from evaluation and feasibility studies for new venues and renovations to selling tickets, hospitality and partnerships, and how to bring those things to life. It’s a natural fit.” 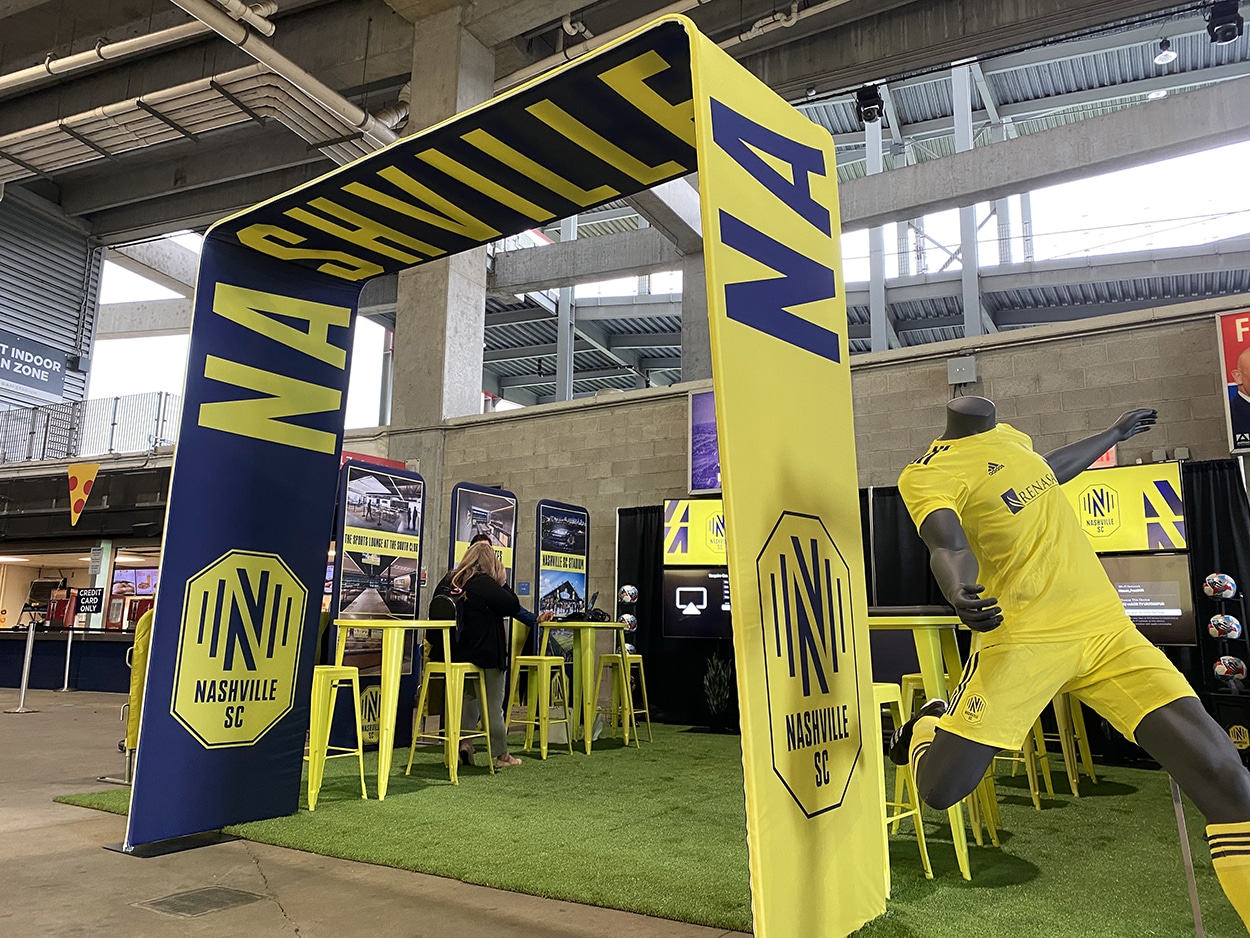 Infinite Scale was already working for one of those clients, Nashville SC, before the acquisition. The firm designed a pop-up sales space at Nissan Stadium, the home of the NFL’s Tennessee Titans, where the MLS team plays home matches until its 30,000-seat facility opens in 2022.

Elevate uses that concourse space on match days to sell season tickets and premium seats for the team’s new home.

In New Orleans, Infinite Scale is heavily involved in rebranding the Superdome for Caesars Entertainment, which has taken over the dome’s naming rights, according to published reports. The New Orleans Saints, the Superdome’s primary tenant, have not officially announced the Caesars agreement.

Infinite Scale’s deal, which runs through 2025, is split between the Saints and Trahan Architects, a local design firm teamed with Gensler on the $500 million renovation of the 46-year-old stadium.

For the Superdome project, Infinite Scale works in tandem with OVG Global Partnerships, which sold naming rights on behalf of the Saints.

In Seattle, Infinite Scale designed spaces for OVG at Climate Pledge Arena, the billion-dollar reconstruction of a 59-year-old building for the NHL expansion Seattle Kraken, the team’s new practice facility, and the Seattle Center campus tied to the arena.

The firm is also working closely with OVG to brand its new headquarters in Los Angeles, Mazzolini said.

Apart from sports, there are opportunities for Infinite Scale to develop branded spaces tied to Live Nation’s stable of about 50 amphitheaters, which includes a handful of new venues coming online over the next few years.

“We’re in the proposal stage with some of that work now,” Mazzolini said.

The 15,000-seater is run by 313 Presents, a joint venture between ownership of the NHL’s Detroit Red Wings and NBA’s Detroit Pistons.

Infinite Scale got the job through its work at Little Caesars Arena, where the two teams play, Mazzolini said.

For both Elevate and Infinite Scale, the pursuit of Live Nation developments is a big plus beyond sports.

“We’re lucky to have great investors focused on our business and to help us build and grow,” Bowers said.

“Live Nation/Ticketmaster is no different,” he said. “It’s the ability to talk to them strategically about what they’re seeing in the entertainment space and help us think about the convergence of the two sectors. That’s what Infinite Scale does, tell stories around brands and partners, and that thread carries beyond sports. That connection is another reason why it makes sense to do this deal.”