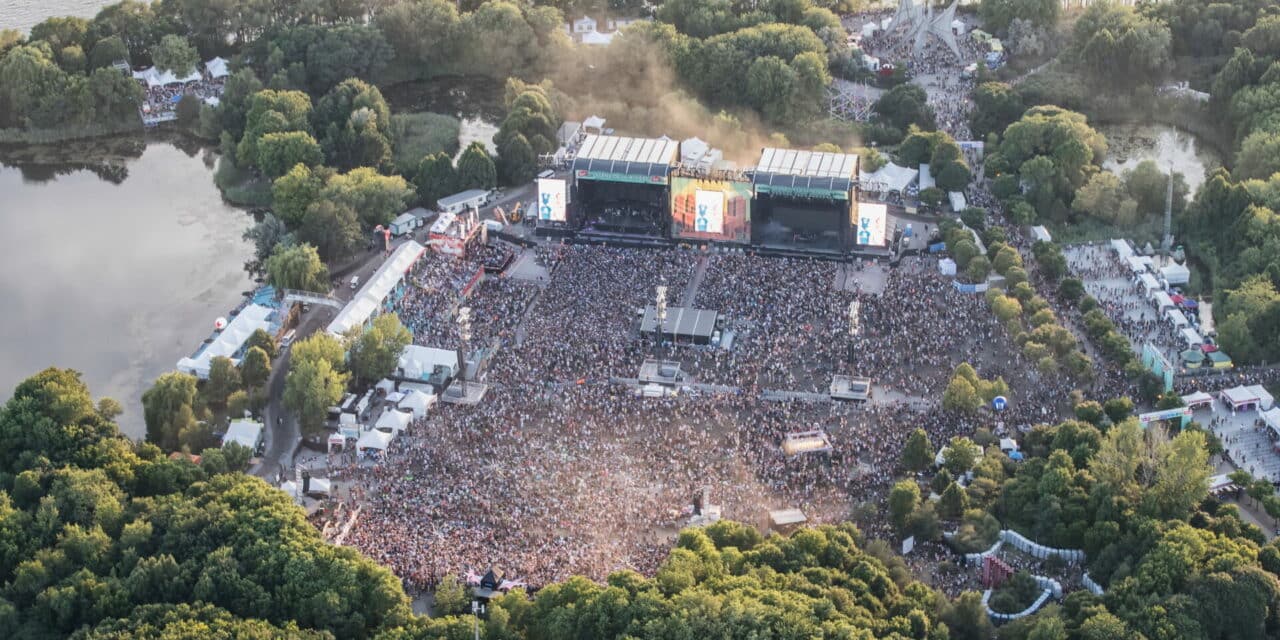 PARC REDUX: The city-owned Parc Jean-Drapeau underwent a recent renovation that has raised its capacity from 45,000 to 55,000. (Patrick Beaudry)

The venue is the city-owned Parc Jean-Drapeau, which after a renovation has jumped from 45,000 to 55,000 capacity.

VenuesNow talked with Nick Farkas, evenko senior vice president of booking, concerts and events, about the challenges of mounting a Canadian festival post-COVID, and how the jam-packed weekends are shaping up.

VenuesNow: How is festival season this year coming out of COVID with potential cancellations and people hesitant about traveling?
We’ve lost two of our headliners on Osheaga since we announced (Foo Fighters and A$AP Rocky), so it’s been tough. Our sales are ahead of our 2019 numbers, but it’s still not great. Our numbers from outside of the province of Quebec are down a bit. There’s definitely a reticence amongst people to take the chance: plan, book a hotel room, all that stuff, not knowing what’s going to happen. We have to rely a little bit more this year on local people than on people that would normally travel.

Has Osheaga previously sold out?
It did some years. It doesn’t sell out every year. It’s up and down. I think five, six years in a row we sold out, but the last few years we haven’t.

Did you ever consider skipping this year?
If we didn’t do it this year, it would have been three years without a festival. We had to do it and for Lasso, our first year was supposed to be 2020, then obviously that got canceled and then 2021, we booked it again and that got canceled. 2022 is hopefully the charm [laughs]. We had tickets still sold from the original 2020 edition for all three festivals. People held onto their tickets for two and a half years, three years almost. So there was no chance that we were ever not going to try to do it this year.

Have insurance rates gotten worse?
Definitely worse. Insurance rates have gone way up since the pandemic, but it’s mostly due to weather, festivals losing a day or losing an entire festival in some cases. Last summer was a bad year for cancellations. So every time that happens, it impacts everybody who’s trying to get festival insurance.

The city renovated Parc Jean-Drapeau. What is it like?
It’s one of the most beautiful festival sites in North America. It’s a 10 minute subway ride from downtown; you’re on an island in the middle of St. Lawrence River. It’s spectacular. The capacity went from 45,000 to 55,000, but when they decided to do the work it was much needed: sound towers, delay towers, wiring running underground, channels that can get right to the stage. So on a technical standpoint, they did a really nice job. And the site, because it’s a wide-open field, it slopes upwards and ends in a hill so it’s a soft, gentle grade.

The idea for us this year was we build Osheaga, which is six stages, and then we move to ÎleSoniq, which is three, and Lasso, which is three, but we are using a lot of the same infrastructure. Because, during a festival, building out everything — stages, barricades, fencing, VIP areas — costs a fortune, but if we can change genres every week, you can build it once.

Obviously, it’s super challenging for a production team to change from the look and feel of an Osheaga to ÎleSoniq,to Lasso, but it’s a great way to ensure that we can provide tremendous production values, staging sound, and lights, all the best stuff possible for all three festivals, as well as make it more cost effective. 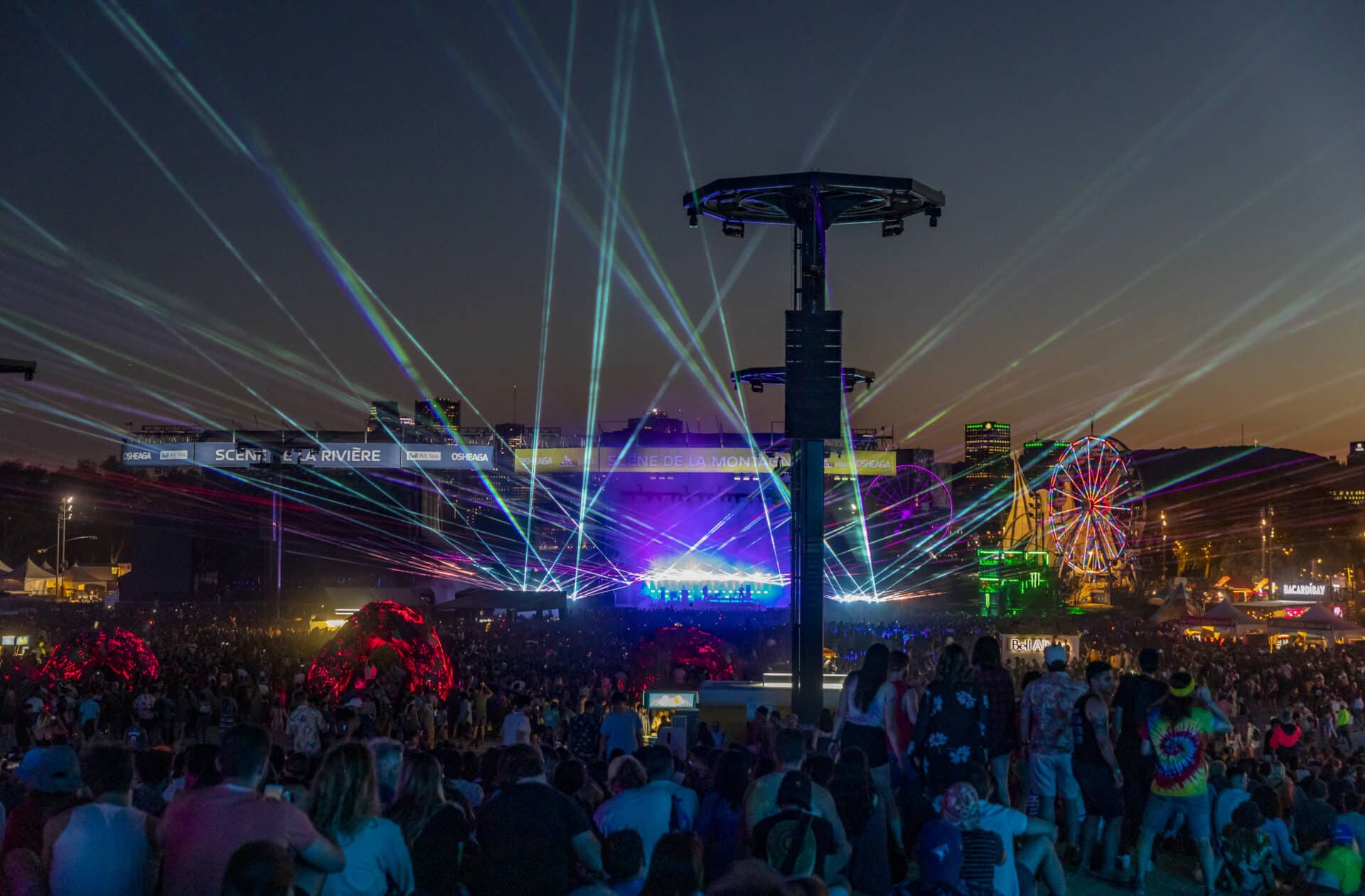 TROIS FESTS: Parc Jean-Drapeau in Montreal is home to three evenko festivals in back to back weeks with multi-genre Osheaga, electronic-heavy ÎleSoniq and its first country offering, Lasso. (Eva Blue)

What is most worrisome for you when you’ve got three outdoor festivals? Is it weather or ODs or trampling or other potential calamities?
I’d say weather, definitely, No. 1. Artist cancellations, two, and maybe third would be staffing. It’s hard to get people post-COVID to work, and getting the equipment and making sure all the suppliers can deliver what’s needed has been really challenging.

When we started, Coachella has Stagecoach right after, so we did our metal festival Heavy Montréal right after (Osheaga) because the idea of having back-to-back festivals made a lot of sense financially. Then we changed it to our EDM festival, ÎleSoniq, but it’s the same model. At the time, country music did not seem like something we would be doing anytime soon.

No Heavy Montréal this year?
No, we don’t do it every year. There’s a huge Rammstein show on the island. So if there’s like a big show in the market, we often don’t do it. We rotate things, so this year we’re trying a country festival.

What wildlife is the park?
Groundhogs. They’re quite cute, but they’re all over the island. If you’re driving a golf cart around in the morning before people show up, you see tons of these guys. They were on our first poster and we’ve done merch with them.