Feeling the love at Field of Dreams 2 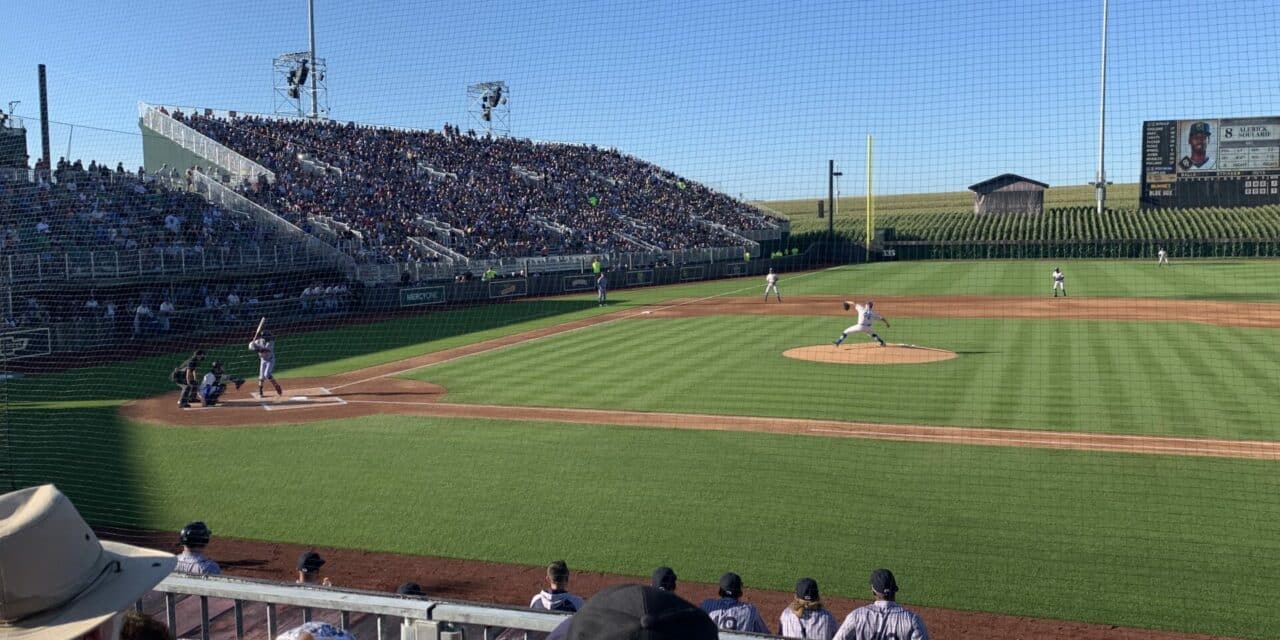 FOX & HARE: Minor league teams from Cedar Rapids and Davenport, Iowa played a game at the Field of Dreams complex on Tuesday prior to Thursday’s Reds-Cubs contest at the pop-up ballpark. (Don Muret/Staff)

DYERSVILLE, Iowa — They built it again and they came again in droves.

Field of Dreams 2.0, Major League Baseball’s pop-up celebration of the sport and the beloved movie in its second year, drew a full crowd of 8,000 on Tuesday to see a minor league game. The Davenport Blue Sox defeated the Cedar Rapids Bunnies 7-2,  served up as an appetizer for Thursday’s Cincinnati Reds-Chicago Cubs game.

For now, those are the final Field of Dreams events for awhile. MLB won’t stage a game in 2023, due to construction of a youth sports complex on the property, according to Frank Thomas, the former major leaguer. Thomas is part of Go the Distance, an investment group leading that $80 million project expected to be completed in 2025.

On Tuesday, both minor league clubs wore throwback uniforms and were temporarily rebranded for teams of yesteryear in those two Iowa cities. Never mind that the Cedar Rapids Kernels, the real name of the Minnesota Twins’ affiliate, was a perfect fit promotionally for a team playing in the cornfields.

Regardless, the event was a hit for MLB, food provider Aramark and merchandiser Legends. Plenty of pork tenderloins, cheese curds and Busch Light were consumed and sales were brisk for $50 T-shirts and $40 hats, most of which were tied to the Reds-Cubs game.

The obligatory souvenir plastic cup, priced at $5, sold out. It came empty with no soda, which explains the relatively low price for that item compared with when it’s full with carbonated beverages.

Technology had its moments before the event.

Mobile ticketing was an issue for some attendees who did not receive barcodes on their game tickets, despite messages informing them those codes would be delivered 48 hours before the first pitch to gain entry into the venue. Thankfully, MLB’s IT folks in the customer service trailer on site resolved the issue, resending tickets with barcodes by email. Delayed barcodes is the newest attempt by ticketing providers to prevent fraud, but glitches in the delivery method, in this case, by tickets.com, don’t do any favors for the ticket-buying public.

The ticketing issue is one example of why MLB made a smart move to schedule an additional Field of Dreams game to work the kinks out prior to the Reds-Cubs contest.

“I don’t want to call the minor league game a test event, but it’s really helping us get reacquainted from where we left off last year,” said Todd Barnes, a senior principal with Populous serving as MLB’s logistical consultant. “You leave for a year, different staff come in and not everyone remembers everything they operated last year. This year, we got everything done two days early. We give it a whirl and then sit down and make the necessary adjustments. We didn’t have that ability last year.”

Last year’s Chicago White Sox-New York Yankees game was the inaugural event at the Field of Dreams complex. By most accounts, it proved to be a massive success, especially on the broadcast side, where it was seen by 6 million viewers on the Fox network and stood as the most watched regular season baseball game since 2005.

“Last year was golden; it’s hard to improve upon something that was perfect,” said Murray Cook, president of BrightView Sports Turf Division, MLB’s official field consultant. “The weather in Iowa is unpredictable and you’ve got to deal with it. This year, we hit 90-degree temperatures early in the summer, so the corn is a little shorter than in the past.”

The cornfield perimeter around the MLB park is actually two feet shorter this year due to Mother Nature, resulting in better views of the outfield path from the adjacent movie site to the pop-up venue, as well as the iconic farmhouse from the film.

“Last year, you couldn’t see any of that from inside the ballpark because the corn was so much higher,” Barnes said. 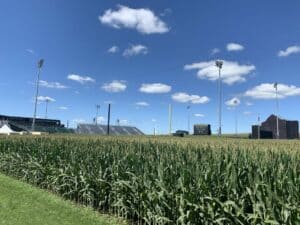 Many fans may not realize that with the exception of the field itself, everything else, including the grandstand and light towers are taken down after Field of Dreams events. For this year, seating vendor In Production installed a new bench seating structure per MLB’s request. The few thousand plastic reserved seats between home plate and first base stayed the same as last year.

The fan plaza lined with picnic tables behind the ballpark for folks to eat and drink was expanded for this year, as well as the broadcast compound for Fox and MLB Network, which aired the minor league game.

“After that, we didn’t really change too much,” Barnes said. “There’s some new decorative things, such as the main entrance, where we added more aesthetics to improve the look overall.”

To achieve that retro look and feel, MLB contracts with bluemedia, a Tempe, Arizona, company specializing in producing themed graphics for sports events and facilities, including multiple Super Bowls.

“From top to bottom, the entire property has this feeling of an early 20th century baseball field, which is the whole intent,” Orr said. “We’re taking painstaking efforts to make everything look authentic and permanent. The goal is to make it look like that’s what it looks like all the time. It doesn’t have a low rent, cheap look to it. It’s high end and the finishes are paid attention to, so when the fans come in, they’re engaged in it.”

For the minor league game, fans passed by Cubs and Reds player cutouts that stood against the corn on the pedestrian pathway connecting the movie site to the ballpark. Designed by bluemedia, they provided a nice touch to accommodate selfies with audio outtakes from the movie piped in for effect. 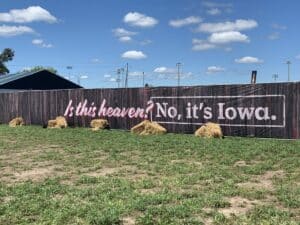 Aramark went cashless for Field of Dreams, using Square’s point-of-sale system, including a few grab-and-go tents. Mobile ordering, branded as Walk Off Refreshments, is an option for pickup to avoid lines and it worked pretty well despite spotty wireless coverage.

Canned beers and cheeseburgers are both priced at $10, hot dogs cost $7 and the half-pound pork tenderloin, Iowa’s unofficial state sandwich, weighs in at $12.

The Cheesecake Chimichanga, an $8 dessert item available for both Field of Dreams games, is a new entry in the never-ending wacky ballpark food category.

The same menu and pricing remains intact for the Reds-Cubs game with the exception of the Chicago Italian Beef Sandwich, a new addition for the MLB matchup.

For Thursday, there’s a 24% chance of rain in the forecast for Dyersville. If the rain does fall and stop the game, bluemedia designed the field tarp to resemble a bale of hay, another nod to Iowa’s strong farm community.

“It continues to be exciting,” Barnes said. “I’ve been here several times, but each time, it’s so touching and warming. I grew up playing baseball and it just grows into you.”