Feld Is Ready to Entertain Again 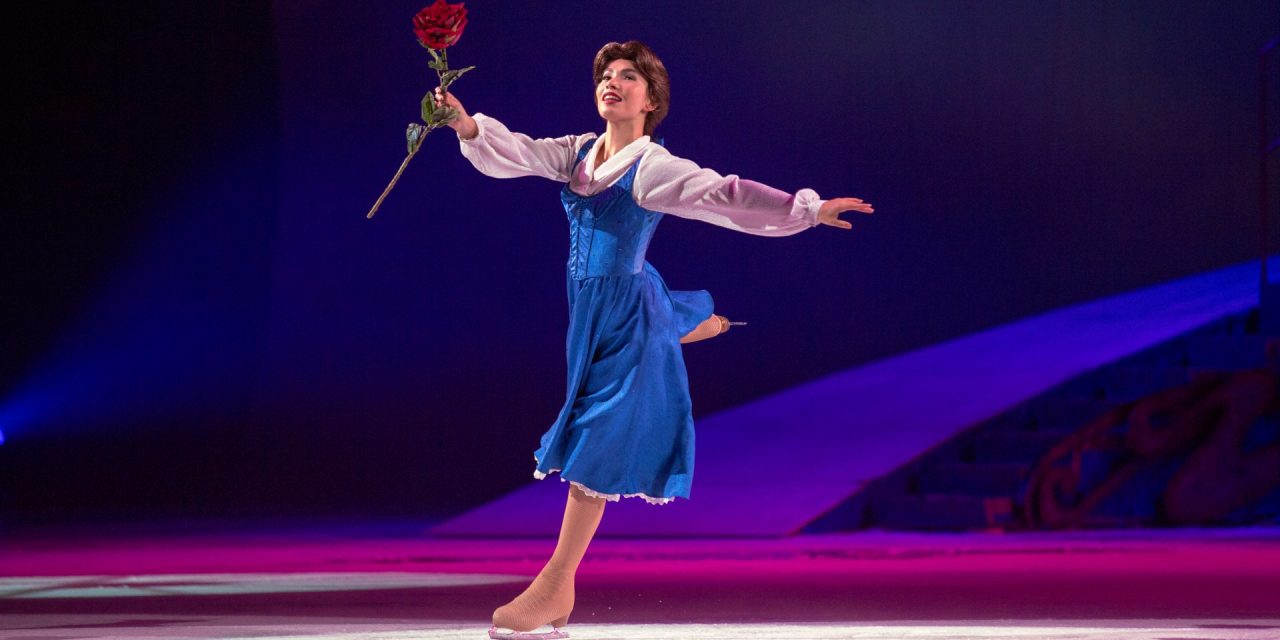 Feld Entertainment is getting back on the road with Monster Jam and Disney on Ice, with shows in the Dallas area marking the company’s first public engagements since March.

Sales for Monster Jam shows on Oct. 24 and 25 at AT&T Stadium were outpacing the last two events Feld had in Arlington, said Steve Yaros, the company’s senior vice president of media and global communications.

Disney on Ice went into rehearsals for a show titled “Dream Big” at Feld’s Bradenton, Fla., facility in mid-October in advance of Nov. 6-15 dates at American Airlines Center in Dallas, Yaros said.

“To be able to bring the shows back is just a testament to how hard everyone has been working here at Feld,” Yaros said. “We feel like we are carrying the torch and we’re excited, but we are being very, very cautious.”

Feld is looking to play additional dates in Texas and then Iowa before heading back to Texas through the end of the year, he said.

“We’re looking at a lot of different opportunities, yet in 2020, nothing that we can call firm right now, but every day we are working with venues and local authorities on a number of availabilities,” said J. Vaught, Feld’s senior vice president of touring productions and operations. “And then, for 2021 the plan is to come out with an even wider schedule of events, not on the scale of what we have done before but certainly a lot more events to get a lot more cities and get a lot more fans back at a live event.” 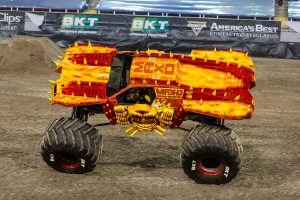 Even on a limited basis, the resumption of Feld’s family entertainment shows — the company typically does 3,500 in 75 countries each year — is good news for venues as well as the public that many in the facilities industry see as eager for their return.

“It has been a bit overwhelming in a positive way,” Jeff Meyer, Feld’s senior vice president in charge of event marketing and sales for North America, said of how industry colleagues have been “cheering us on from the sidelines.”

“We’re starting to open up a little bit,” he said. “We hosted Dallas Stars watch parties for the NHL Stanley Cup and conference finals, so we’ve had ticketed guests in the building in the last month and we’re looking forward to our Disney on Ice run coming up in November.

“The most important aspect is how it’s going to be received by the guests. So far, we’ve had strong sales, so I think the demand is there, but again I think there is some element still of apprehension of coming to venues like American Airlines Center and we’ve got to prove … that we can do it safely and folks should not fear coming to our venue as long they are following the protocols that we specify.”

Those include mandatory masks and remaining within seating pods or keeping physically distanced while out of one’s seat.

Venues that hold 19,000 for a hockey game like the American Airlines Center are well-situated to handle limited amounts of guests in a distanced configuration with seating in pods between two and eight guests, Brown said, adding that the manifest for the Stars watch parties was 5,500 seats and one event was sold out, with an overall drop count of 4,800.

Meyer said capacities will be around 3,500 for the Disney on Ice shows and just over 17,000 for Monster Jam, in a stadium that would usually accommodate about 60,000 for such an event. Ticket prices for both shows average about $30, which is around where they were last time the shows came to the Dallas area.

Distributing seating throughout the building can alleviate some social distancing concerns. “You disperse them throughout the venue in the seating pods and it increases natural separation where they’re going to restrooms on different sides of the building,” Brown said.

Meyer said Monster Jam would typically play one date at AT&T Stadium “but due to capacity constraints we’re playing two.”

“We’re playing a Saturday and Sunday,” he said. “And it’s the same (for Disney on Ice) in Dallas. Typically, it’s a one-week event, Wednesday or Thursday through Sunday. In this particular case we’re playing 10 days. We’re playing two weekends to give us enough capacity to keep up with the demand.”

Brown said that his team has been developing a game plan for reopening for several months but that “we only decided to open up for these watch parties about 48 hours in advance of hosting the first one. So we had to scramble to tape off seats, close fixtures in the restrooms, to mark the concourses for social distancing and to get our information out to the guests that would be coming to the venue.”

That experience will help not only for the Disney on Ice performances but also later when the arena opens for basketball and hockey, Brown said.

Meyer said booking Feld’s tours is even more of a jigsaw puzzle than in normal times.

“Our booking team, they spend countless hours a day in putting together scenarios. We’ve been monitoring every state in the union,” he said. “We have a master grid back here that’s updated daily from our government relations team and our folks internally here and we monitor what’s available, what’s opening up. … We’ve put 10, 20, 30, 40 scenarios together for every property that we’ve got and we’re like racehorses sitting at the gate ready for the race to start. … We’ve focused the tours on the states that are open for business. That’s why you see us going to Texas to start.”

Feld is using Ticketmaster to map out seating configurations and has taken other measures to ensure the events are as safe as possible.

“We have brought on a consulting epidemiologist and also an industrial hygienist to help us evaluate our operation behind the scenes and also to help us be better partners with venues for everything in front of the curtain, and it’s been tremendously helpful because there is a lot of information flying around out there in the universe about COVID,” Vaught said. “Having an epidemiologist help us navigate through and come up with the absolute best plans based on the most accurate information that’s out there and best guidance has been invaluable.”

Advertising is mainly through digital and social media, along with some television and radio, Meyer said.

“We have a very robust database of past ticket purchasers that we’re mining as well and it’s been pretty effective,” he said, adding that “know before you go” emails spell out for patrons what to expect in terms of safety requirements when they get to the venue. 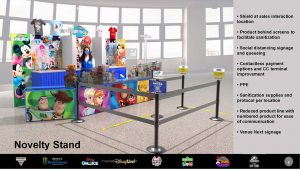 Feld has worked with venues and VenueNext to put together a new cashless, minimal contact process for food and merchandise sales with mobile ordering and payment and prepackaged food, even snow cones, said Graeme Burman, Feld’s senior vice president and chief logistics and merchandise officer.

“It’s been a work in progress,” he said. “We started right away when we learned things were going to change. We are fortunate we have a great space here. We were able to set up and do some workshopping of the customer transactions and how we would set up.”

“We feel pretty comfortable that we’ve got a pretty good solution in place,” he said.

Feld has been working with VenueNext, a mobile point-of-sale vendor, for the past year on concessions sales friction. Several in-venue tests gave the company a bit of a head start, Burman said. Cashless transactions had been growing in volume and advance sales of certain items have been conducted through Ticketmaster for several years, but the pandemic has given greater impetus to advancing those solutions.

“It’s really an extension of what we had already started to do,” Burman said. “Ultimately, customers are going to have more and different opportunities in the way that they are able to select their merchandise, speed of transaction, all of that. It’s not something we would have wished for, but it’s something that has (made) us concentrate on solutions we were working on already.”

Touring personnel will be tested regularly for coronavirus, with more frequent screening for those at points of sale and in other functions with higher guest contact, Burman said.

Among new merch items will be masks ranging from disposable versions to those with logos and character-based prints. Snow cones, usually made fresh, will come repackaged in a paper sleeve that is then slid into a souvenir item. Aisle sales will be limited to stationary locations where queues can be maintained and managed, Burman said

Brown said revenue from the Disney on Ice shows is welcome and sorely needed but, just as important, the watch parties and ice shows also represent further steps back toward recovery from the shutdown.

“We did the watch parties more for awareness and promoting the Dallas Stars’ success, giving their core fans a place to celebrate together. We did sell tickets, but it was a $10 or $20 ticket and we reduced the price of parking,” he said. “At the end of the day it generated a little bit of money, but that wasn’t the reason for hosting them.”

Feld is now restarting its business “in a venue and a city that is going to be receptive to it,” Brown said.

“We’re thrilled to host Feld, but it wasn’t about the finances,” he said. “That wasn’t the primary reason for us to agree to host these dates. It was more about restarting our business. … It’s more about proving to ourselves and proving to our industry that we can host guests and that the business is coming back. I hope it can be something that other venues and cities can rally around.”

“We’ve got to get back out and we’ve got to lead in getting something out so we can start the momentum for the industry, ” he said.