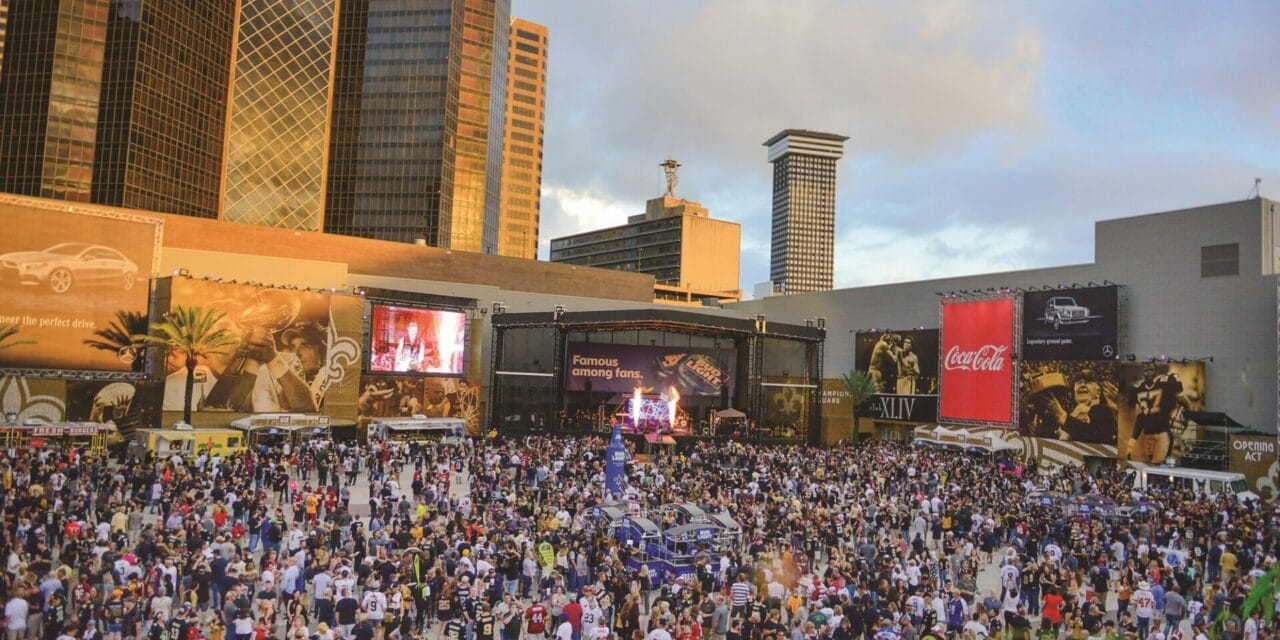 We Are The Champions: Champions Square, nestled between the Caesars Superdome and Smoothie King Center, now hosts 40 events a year including concerts by touring artists such as H.E.R. and Smashing Pumpkins.

Entertainment at a sporting event is a slam dunk, especially when that event is the NCAA Men’s Final Four in New Orleans.

“Anytime we host a major event, New Orleans is a huge selling point,” said Doug Thornton, executive vice president of ASM Global, which manages the Caesars Superdome, Champions Square and the Smoothie King Center. “It’s one of the things that draws people to us. It’s not hard to sell what our city offers in terms of venues, live music, food, and the numerous opportunities for sponsors and partners.”

New Orleans is one of only five cities to host the pinnacle of the annual men’s college basketball season six times. The city played host to the Final Four in 1982, 1987, 1993, 2003 and 2012. That year, the Final Four generated $168 million in spending and added $13 million in state and regional tax revenue, according to state figures.

A decade later, the event is something to celebrate for a city in need of a boost following COVID-19 and Hurricane Ida last August.

“The last two years have been tough on everyone,” said Thornton. “New Orleans relies heavily on the hospitality industry. For the businesses that survived, this is a great opportunity for them to have a big week and get back on track and start earning and bringing in business dollars generated by the venues. It means a lot to our city.”

Caesars Superdome will hold 70,000 for Final Four, but not having a ticket won’t stop fans — especially students attending the schools that advance to championship weekend — from traveling to New Orleans to be part of the experience and enjoy free events presented by the NCAA and assorted partners. Thornton said the NCAA estimates that 10,000 non-ticketed fans will make the trip to Louisiana.

“They just want to be part of the event, especially this year,” he said. “There’s this pent-up feeling. People want to be part of something larger than themselves.”
The Final Four production has a massive infrastructure of NCAA stakeholders including the teams, media and network affiliates, title sponsors and national brand partners and local groups. Host schools Tulane University, the University of New Orleans, ASM Global, the Greater New Orleans Sports Foundation and the New Orleans Local Organizing Committee are all part of the mix.

“New Orleans is a popular destination in its own right,” said Jeff Rossi, senior vice president of the Greater New Orleans Sports Foundation and the local organizing committee’s executive director. “The French Quarter, food, music and clubs are here, so it becomes a popular destination with basketball fans (and) with the broadcast networks, plus vendors that are part of the NCAA and retailers like Adidas and Nike.”

“More than any other city, New Orleans fits very well into what the NCAA is trying to achieve with a big event,” he said.

In addition to the venues, proximity is central to the fan experience in New Orleans.

“In another city you’ve got 10 miles separating the hotel and venue,” Rossi said. “Downtown is within walking distance of the French Quarter, bars, restaurants, live music, Fan Fest at the convention center and less than a mile to Caesars Superdome.” 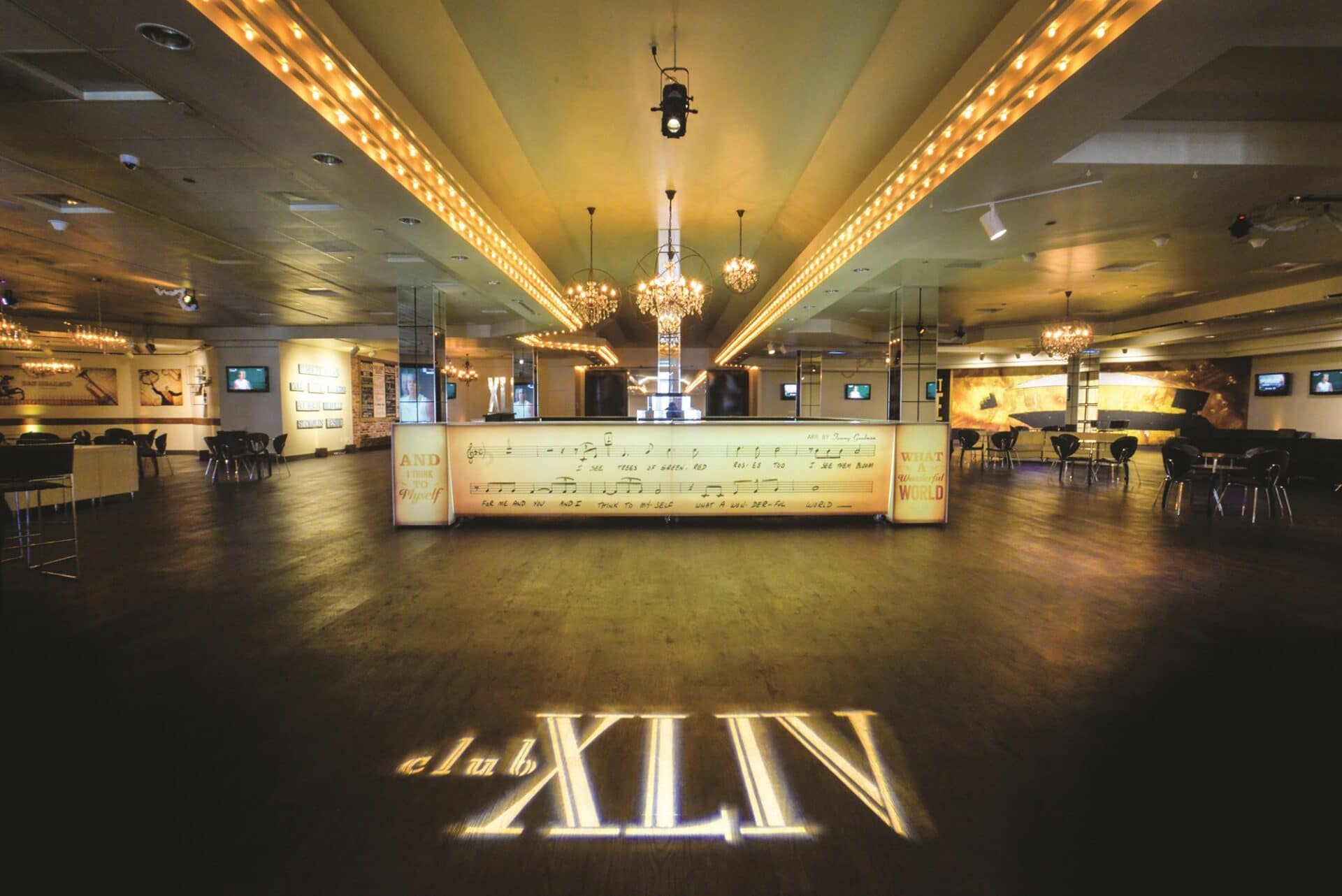 The local organizing committee and NCAA go to great lengths to make sure visitors are entertained from April 1-4 with a combination of sporting events and live concerts happening throughout the footprint.

Two of the most popular free sports offerings are back after being canceled in 2020 amid COVID concerns: the open practice for participating teams April 1 at Caesars Superdome. It’s expected to draw 15,000 to 30,000 fans, followed by an all-star game, featuring some of the top college players.

The Final Four semifinals are set for April 2 with the championship determined on April 4.

“With private sponsor parties including Turner, Sports Illustrated and ESPN, and the NCAA hosting clients, every available space will be rented out in some form or fashion,” Thornton said.

Public event spaces including Champions Square, nestled between Caesars Superdome and the Smoothie King Center, the Ernest N. Morial Convention Center and Woldenberg Park on the riverfront, all programmed with events and concerts. The Final Four Fan Fest presented by Capital One, the NCAA trade show and lifestyle event, will be held in the 35,000-square-foot convention center along the Mississippi River with performances, interactive games, celebrity appearances and autograph signings.

The March Madness Music Series presented by NCAA Corporate Champions and Partners, will be held at Woldenberg Park on Canal Street in the upper French Quarter with three days of free concerts including Khalid on April 2 and Imagine Dragons April 3. Organized and produced by the NCAA, the waterfront park can accommodate up to 12,000.

Organized and produced by the NCAA, the waterfront park can accommodate 12,000. Fans must register to attend on the local organizing committee website.

Champions Square features a permanent stage with sound and lights that can accommodate up to 8,000, in addition to the adjacent private space called Club XLIV, at 6,500 square feet. Thornton calls it the “ultimate urban tailgate experience.”

The club was part of a shopping mall before Hurricane Katrina struck in 2005. The building never reopened and in 2010 it was converted into a hospitality destination for Superdome events.

The Benson family, headed by Gayle Benson, daughter of the late Tom Benson, owns the Saints and Pelicans. They bought the mall and office tower next door with a plan to repurpose the property.

According to Thornton, new market tax credits, state capital outlay and private money was used to develop Champions Square, which now hosts 40 events a year, with upcoming shows by Smashing Pumpkins and H.E.R.

“People want a special experience when they go to an event,” Thornton explained. “They don’t want to just sit in a seat, they want the entire experience if that means getting to the stadium three hours prior.”

Leave the tailgate grill and pop-up tent in the garage, according to Thornton.

“They can walk in and be with 7,000 friends, listen to music, and be steps from the forum door,” he said. “That is an upgrade to the fan experience. That is what Champions Square is all about.”

There are obvious efficiencies without the need to build staging and bring in tents and lighting. But if those exterior event spaces are turnkey, transforming the dome into a basketball court for 70,000 isn’t as simple as rolling in some bleachers and hanging nets.

The concept of expanding seating for the biggest game in college basketball started a dozen years ago when capacity was in the 40,000 to 50,000 range and the court at one end with modular seating sprawled across the floor. Today, the court is elevated three feet off the ground in a midfield setup with telescopic seating, adding 3,700 additional seats.

The process takes three weeks to be completed.

Thornton said the time and effort are worth it for a city on the rebound.

“The excitement is building now in anticipation of the tournament, which is always fun,” he said. “I know New Orleans will be a great host and our ASM team will do a great job. It’s a lot of planning and work, but it’s also a very rewarding feeling when the buzzer sounds.”