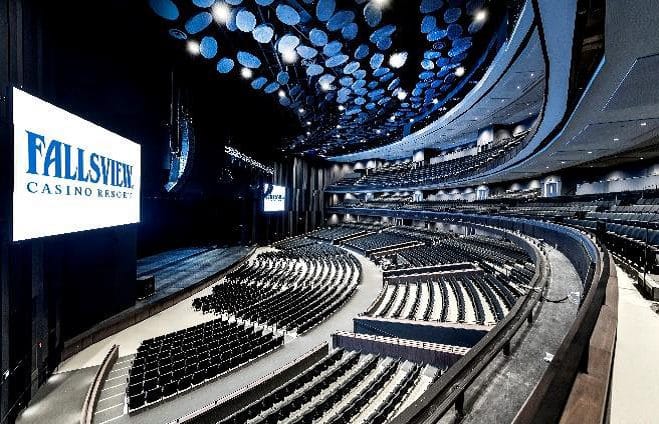 A new $94.1 million theater is finally opening in Niagara, Ontario, after a 40-month delay due to the pandemic.

The brand new OLG Stage at Fallsview Casino will host its first shows this month in Canada’s top tourist destination, which draws 13 million visitors annually according to Niagara Economic Development.

Tom Cantone, president of sports & entertainment worldwide for Mohegan Gaming & Entertainment, is part of the Niagara Falls Entertainment Partners GP consortium, which includes DIF, Bird Capital and Hospitality Resorts Inc.  He says the state-of-the-art venue has “the latest and greatest in sound, lighting technology and acoustics.”

Mohegan already operates two casinos in Niagara, and partnered with the Ontario Lottery and Gaming Corp (OLG) on the entertainment center, which didn’t have a name until recently.

“It has the ability to hold productions that are fairly large to the smallest comedians, so it’s got flexibility and we can retract the balconies, depending upon the popularity of the artist, we can flex the room into a bigger model or a smaller model,” Cantone said, adding jokingly, “The stage is huge, by the way. You could probably play a basketball game on it.”

Located in the Niagara Falls district, next to the Hilton Hotel, OLG Stage at Fallsview Casino is the largest soft-seat theatre in Canada — Caesars Windsor and Casino Rama also hold 5,000 people “but are multiple-purpose rooms,” Cantone distinguishes — and “no seat is more than 150 feet from the stage,” he says.

Fallsview has long had the 1500-capacity OLG-owned Avalon Theatre, which has shows on the schedule ranging from Chelsea Handler to Richard Marx and George Thorogood, but OLG Stage at Fallsview Casino opens up new possibilities for the area. “My philosophy has always been whoever is the hottest in pop culture is on our radar,” Cantone said.

The first show was supposed to be in early 2020 with Brad Paisley but was cancelled. Now, it will be introduced to a national audience on the third season of Canada’s Got Talent, which will use the space for auditions. “That’s a great way to break in the room before we start going with major programming for concerts,” says Cantone. “It’s almost like the residency, but it’ll come and go. Right away, we’ll get instant brand recognition for the venue.”

So far only a handful of shows have been announced: Live (Oct. 29), I Love The ‘90’s Tour with Vanilla Ice, Young MC, Rob Base, and C+C Music Factory (Nov. 4), the Lumineers (Nov. 6), Joey Yung (Nov. 20) and Michael Bolton (Dec. 16), but, Cantone says, “We are aggressive in our programming. That’s what Mohegan Entertainment does at all of our properties. We’re probably going to be one of the busiest venues in all of Canada.”

He says the notion of a casino venue drawing an older crowd who happen to be on site to gamble and want to see so-called legacy acts is a thing of the past. Niagara is close enough to Toronto, Hamilton and Buffalo to draw music fans specifically to the venue.

“Age has never come into play. That day is over. That old Vegas mentality is gone today,” he said. “It’s all contemporary pop culture that draws all ages. We program the venues according to who’s hot.

In Canada, Mohegan has its local operations through MGE Niagara Entertainment Inc., which Cantone makes a point to praise with “doing all of the heavy lifting and all of the hard work and all of the preparation. The credit goes to them for getting this off the ground. The staff at Fallsview has worked really hard over their pandemic with many hurdles to get this room ready and open and they deserve all the credit.”