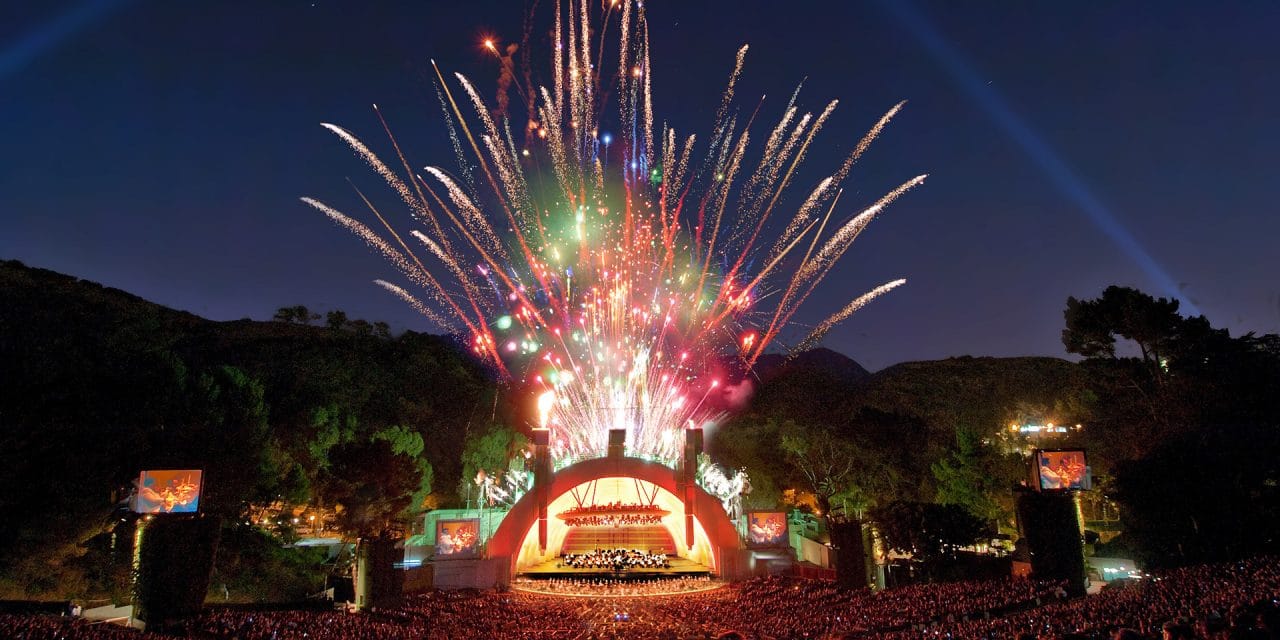 SHELL OF A TIME: Hollywood Bowl patrons enjoy a performance under the stars during a previous season. (Adam Latham)

When the coronavirus pandemic descended on America in March 2020, many experts predicted vaccines might not be available for 12 to 18 months. The writing was on the wall for the summer concert circuit: Not only was 2020 in jeopardy, but so was 2021.

The vaccine’s arrival in December 2020 — resulting in one-third of Americans being at least partially vaccinated by early April — changed the calculus. Suddenly, a somewhat normal summer seemed within reach.

As the nation’s public health prognosis improved, the live business adapted, with festivals and outdoor venues announcing summer programming that scant weeks earlier seemed improbable. Among them was one of the amphitheater sector’s crown jewels, the Hollywood Bowl.

When VenuesNow connected in April with Laura Connelly, Los Angeles Philharmonic Association vice president and Hollywood Bowl general manager, she was wrapping up a whirlwind week. Days earlier, California Gov. Gavin Newsom had announced the Golden State could fully reopen June 15, significantly earlier than expected. The news prompted the bowl to modify an announcement that was already coming — four free, socially distanced shows for frontline workers in late May and early June, with a capacity of 4,000, less than a quarter of the venue’s typical allotment — to include bolder programming plans for the summer and early fall.

“The new mantra is being flexible, being fluid, being ready to turn on a dime,” said Connelly, admitting much remains uncertain for the bowl and other similar venues. “We’ll be ready for whatever is thrown at us. We’ll be there waiting to go.”

In a conversation with VenuesNow, Connelly detailed the bowl’s reopening plans and how it continues to roll with the punches.

How did you arrive at the decision to reopen and settle on this reopening timeline? To what extent did the governor’s guidance impact that?
The fact that we haven’t been open for over a year has been really tough on everybody — on our local community, on our staff, on our musicians. So we’re elated that we can be back and up and running. We’re obviously following our county health guidelines and following all the protocols involved in reopening. The announcement of the governor earlier in the week kind of threw us off a little bit, because we had another announcement planned, and then he suddenly said that we would be somewhat business as usual on June 15. We had to scramble and come up with another enhanced plan. But that’s the new normal, right? Flexible, fluid, being able to pivot.

What types of changes did you have to make to your announcement due to what the governor announced?
Originally, we were going to just include our four free concerts that we’re having in May and June, and then talk about the potential of what a season might look like if we had to have reduced capacity. We’re still having our four free concerts — two with the L.A. Philharmonic and (music director) Gustavo Dudamel in May, and then one with Flying Lotus and Thundercat and one with La Santa Cecilia, all free. But now we’re looking at what the possibilities are of having larger capacities, starting with concerts in July and a July 4th spectacular somewhat akin to what we would do in a normal season. We’re super cautious and want to really emphasize that we’re following all the guidelines. As soon as the county gives us more enhanced information on what Gov. Newsom’s business as usual edict looks like then, we’ll be ready to go. But we can’t help feeling that there’s a lot more optimism since his announcement than there had been previously.

So the governor gave this guidance, but you’re still in limbo, in terms of what that might actually mean come June 15.
Yeah. 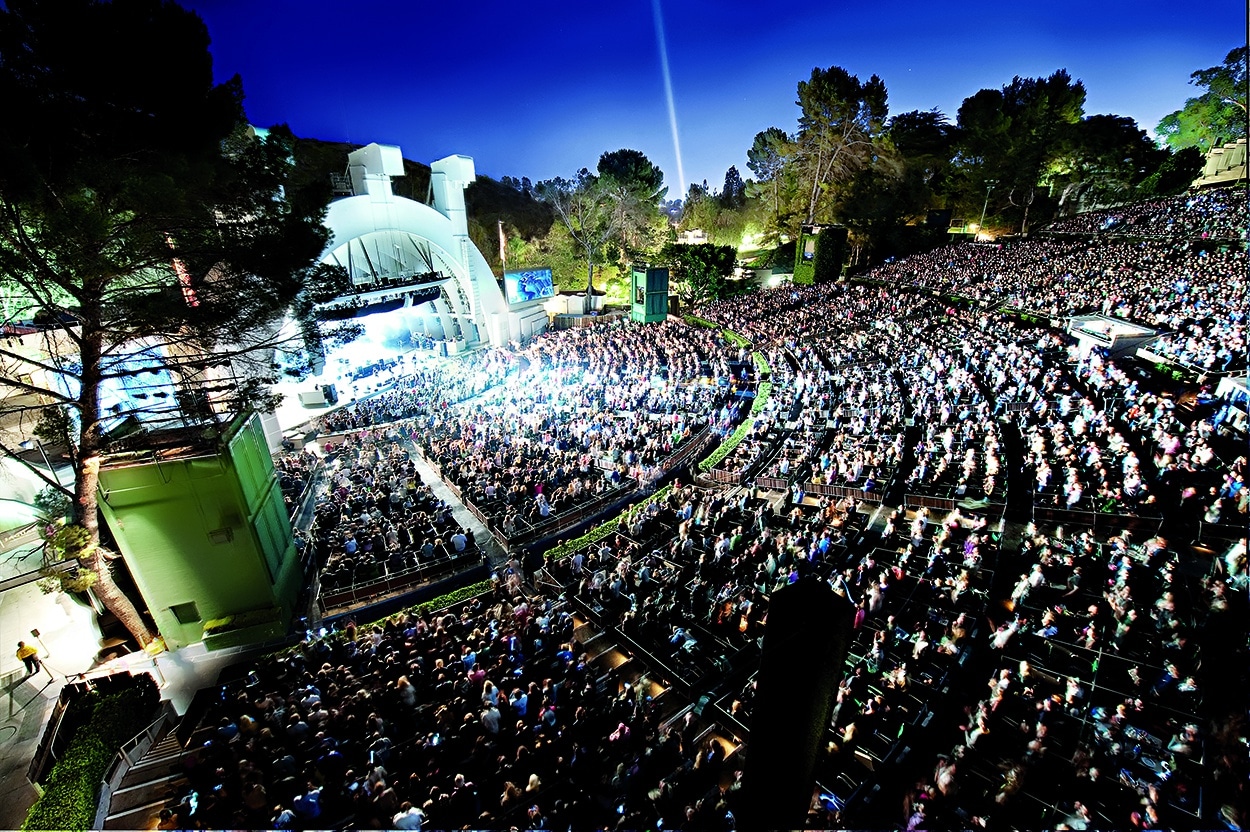 OUTSIDE CHANCE: “The fact that the Hollywood Bowl is an outdoor venue is a huge advantage, as all the scientific information has proved that being outdoors is a lot easier to deal with the COVID precautions than indoors,” Connelly said. (Adam Latham)

Over the last year, we’ve repeatedly seen examples of different levels of government having different and sometimes conflicting safety guidelines, and of those sometimes conflicting with guidance from the scientific community. What guidelines are the Hollywood Bowl adhering to?
We’re very strictly adhering to the county and what the County of Los Angeles Department of Public Health is advising. We will be enforcing what we all see as the basics now: the 6-foot distancing, the mask wearing, the sanitation and cleaning protocols. But it’s those nuances that may allow us to open up to more capacity. Will they reduce the 6-foot distancing rule? Will they say that everybody who has a vaccine can come and that we would be able to increase capacity based on vaccinations? It’s those nuances that we’re specifically waiting for and that will allow us to increase capacity and make sure that everybody’s safe. That’s the primary goal here: to make sure that staff, audience members, musicians, that everybody feels safe coming to the venue.

Is the bowl planning to use podded seating formats to accommodate guests at these early concerts?
We’ll have more details on our website when we announce the regular season on May 11. But yes, we’re looking at pods of two or four people and then making sure that those pods are socially distanced from other pods.

What might the Hollywood Bowl’s calendar look like this summer and fall, in terms of the frequency of events and the types of bookings you’re looking at?
You can expect some family favorites that we’ve had traditionally over the years. We’re looking at about 14 weeks, starting at the beginning of July. Our partners, Live Nation-Hewitt Silva, will be rolling out more information as they get more things confirmed and are able to announce, as well.

Among agents and artists you’ve talked to, what has the mood been like about returning to the bowl and live shows with in-person audiences?
As soon as Gavin Newsom had made his announcement, our phones blew up. The agents and managers were definitely enthusiastic about when they might be able to come back and play the Hollywood Bowl. Even though everyone’s being cautious and making sure that the health guidelines are being adhered to, you’ve had a lot of artists who have been out of work for the past year, year and a half and everyone wants to get back to work. There was definitely a lot of enthusiasm for us being able to open, as well as other outdoor venues. All across the Southland, I’m sure all our booking peers were getting the same kind of calls.

Whether it’s Gustavo and the Philharmonic or Thundercat and Flying Lotus, can you speak to the importance of booking regional and local artists?
We’re really using this as an opportunity to book people who live locally. We’re definitely wanting to champion local artists and work with local communities and make sure that these people are celebrated.

COVID has expedited technological advancements in the industry that were already gestating before the pandemic, like cashless concessions and mobile ticketing. How might the Hollywood Bowl look different to returning fans?
We are definitely looking at those technologies, like everybody else. Touchless ticket scanning, touchless ticketing for our parking, mobile ordering for our food and wine deliveries, all that stuff. It’s been a really great excuse, if you will, to look at those technologies and really bring them to the fore.

What role are outdoor venues like the bowl playing in live’s comeback?
We’re very fortunate. The fact that the Hollywood Bowl is an outdoor venue is a huge advantage, as all the scientific information has proved that being outdoors is a lot easier to deal with the COVID precautions than indoors. The Southern California outdoor venues are going to be instrumental in being economic drivers for the state. If I think about the Hollywood Bowl, and the hundreds of seasonal employees that we have, this is going to be a huge boon to the economy, once we are able to get back up and running. And I can’t help feeling that it’s going to be the same for other outdoor amphitheaters. I speak for myself, but I can’t wait to go and sit in a seat and listen to live music. I think people will take real advantage of being able to go outside and hear live music this summer.

Are you optimistic about demand — that if you’re open for business, people will come?
Yeah, I’m optimistic. People’s degree of comfort will differ, and I think that as we get more information about the vaccines and we get more and more people vaccinated, there will probably be an increasing comfort level. But the main thing for us is that we’re following all the protocols and that we’re letting our patrons know that we’re doing everything within all the guidelines to make people as safe as possible. And then that’s their choice (to come). But I think there’s a lot of pent-up demand.

How do you think the pandemic will impact the amphitheater sector over the next few years?
I think the economic impact of COVID is probably going to have a tail for a lot of businesses. Being able to open and being able to have more and more people in the venue is obviously a plus — but I don’t know how much is going to be business as usual. Every day there’s a change. Every day, there’s new information.

Saint of Circumstance: With an Arsenal of Pandemic-Era Procedures, Florida’s St. Augustine Amphitheatre Provides a Model for COVID-Compliant Outdoor Venues