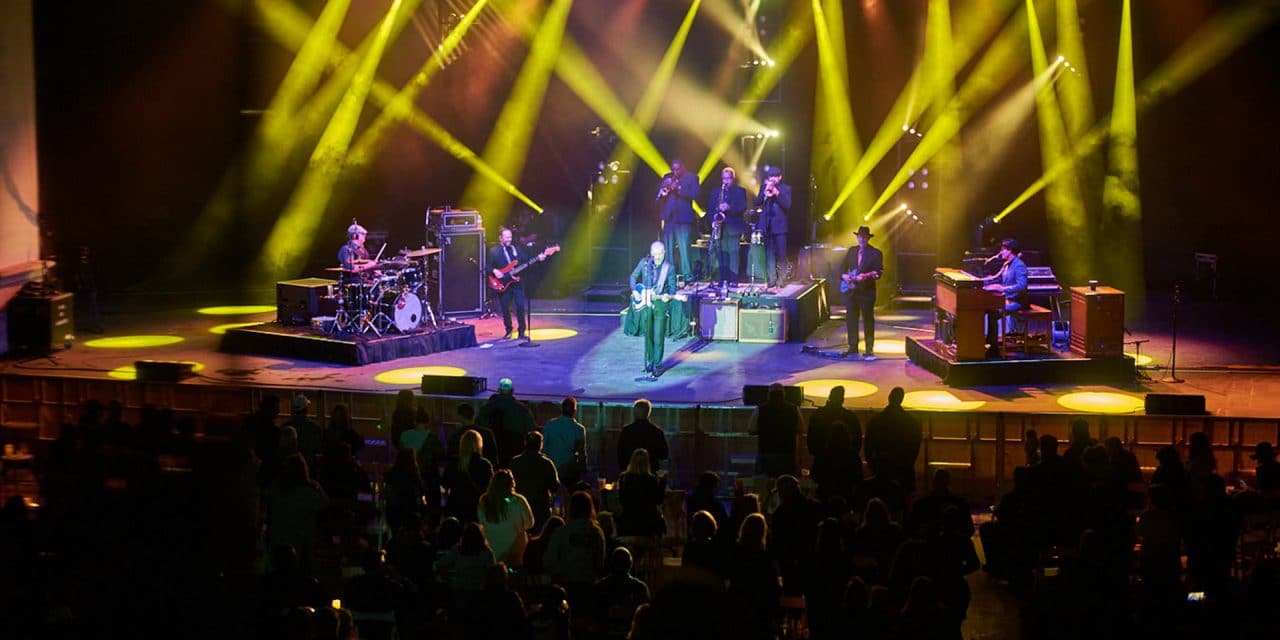 JJ Grey & Mofro have played at the St. Augustine (Florida) Amphitheatre several times, but the Jacksonville rock act’s Jan. 15 gig there was unlike any other in it or the venue’s history.

For the first time since the coronavirus pandemic forced the live industry offline in March 2020, fans were back in the stands at the government-owned facility, which is under the purview of Florida’s St. Johns County.

As masked fans entered the venue, they passed through thermal imaging cameras to ensure their temperatures were below 100.4 degrees before walking through metal detectors — bought to reduce contact with venue personnel – and scanning their mobile tickets at new ticketing kiosks.

En route to their seats, patrons passed touch-free hand sanitizing stations and concession stands with plexiglass dividers between cashiers and customers before arriving at pods, consisting of two to eight seats each, that had been sprayed down by electrostatic backpacks loaded with disinfectant.

And while the amphitheater welcomed a sell-out crowd, its attendance was far below normal, pre-COVID levels: Only 1,668 guests attended the gig, compared to the roughly 4,800 who can fill the stands when the venue operates at full capacity. The next night, St. Augustine welcomed 1,719 guests, yielding a total ticket gross of $248,706 over two nights.

It wasn’t business as usual, but it was business.

“We’re friends with the JJ Grey & Mofro crew,” said Gabe Pellicer, the amphitheater’s general manager. “That was our first show and they knew what we were doing and it actually just worked out perfectly for us.”

Not that it was easy. The gigs were the culmination of eight months of reopening planning by venue staff, in conjunction with county officials and the Event Safety Alliance.

“We spent a lot of our time and attention towards figuring out how to open at a partial capacity,” Pellicer said. “We’re an amphitheater in Florida that can operate year-round. We thought we had an opportunity to do it the right way, and started working on our plan.”

Thanks to the venue’s government connection, its staff had speedy access to the latest regulatory edicts by county officials. Said Pellicer: “We were in the room.”

Procurement for COVID-era technology and equipment proved timely and costly, but by the new year’s arrival, St. Augustine had most of the pieces in order.

“We had to completely transform the way that our ingress and egress (works), food and beverage, merchandise, everything,” Pellicer said. “We replaced every seat in the amphitheater with a seat that can be locked in to create pods. Without that, I don’t see us being able to do this. It would have been too hard to keep people in their pods without physically being able to close those seats.”

Of course, the venue, which has since staged several other shows, including a sold-out, three-night March run by jamgrass extraordinaire Billy Strings, is still familiarizing itself with pandemic-era shows, as are its patrons.

For one, the pod seating format has presented a learning curve. Different artists draw differently sized groups  — couples or small families or groups of friends, for instance — precluding a one-size-fits-all layout and subsequently shaping the types of deals the venue can arrive at with artists and their representation.

The pods take some getting used to for fans, too.

“The biggest challenge we had was the digital ticketing component, because when you sell tickets in pods, usually one person has all the tickets on their phone,” Pellicer said. “Once someone leaves and they try to come back to find their seat, they don’t have their ticket in front of them.”

Pellicer and booking manager Cari Baker confirmed the popularity of St. Augustine’s pandemic-era business model for all parties. After observing the success of the venue’s early 2021 shows, artists and agents are clamoring to play gigs there, regardless of the setup.

“May is 100% busier than it was in previous years,” Pellicer said.

Thanks to positive vaccine developments, the live industry is coming back online and the race is on for outdoor venues elsewhere in America to fill calendars before colder temperatures arrive. By virtue of its location, St. Augustine’s booking equation for 2021 is different from amphitheaters in other parts of the country.

“Our busiest time of the year is September, October, November,” explained Baker, and Pellicer concurred that June and July are “such a slow time for us normally, anyway.”

The wild card for outdoor venues is just how soon artists route full-fledged tours on the amphitheater circuit and whether those shows will happen with full or partial capacities. It could vary depending on state and local regulations. Due to this uncertainty, venues and artists alike have hesitated to book early summer amphitheater tours before capacity restrictions become clearer.

“We are hopeful that by July, we’re gonna have (greater) capacity, maybe be able to expand back to where we were before,” Pellicer said. “But there’s no telling.  That is the game that all of us are playing in venues right now, to try to figure out when it’s going to be safe to open and try our best not to have a show cancel or reschedule again. So many fans have seen that (occur). We don’t want to compromise our integrity by doing that.”

“We’re unsure if that is being honest to the patrons,” he said. “There could be some people that maybe don’t feel comfortable in July, that purchased tickets specifically because they were going to be away from each other and all of a sudden we’re putting people next to them.”

“June and July tend to be a little slower, and it allows us to sit down and think about this and make sure that we have our patrons’ best interests in mind moving forward,” Pellicer said. “We’re anticipating that to be the biggest fall that we’ve ever had, just by the way the calendar looks.”

“We’re seeing a little bit of a trend of some of the artists that, like all of us, haven’t been able to do anything for a year and are rethinking their approach,” he said. Comedy, and spoken word artists, for example, are now focusing on playing more outdoor dates over previous years.

Pellicer eagerly anticipates the return of full-capacity shows with additional health and safety features in place.

“The more people are wanting to go to amphitheaters, the better for us,” Pellicer said. “We want our venue to feel like it’s an oasis for people.”