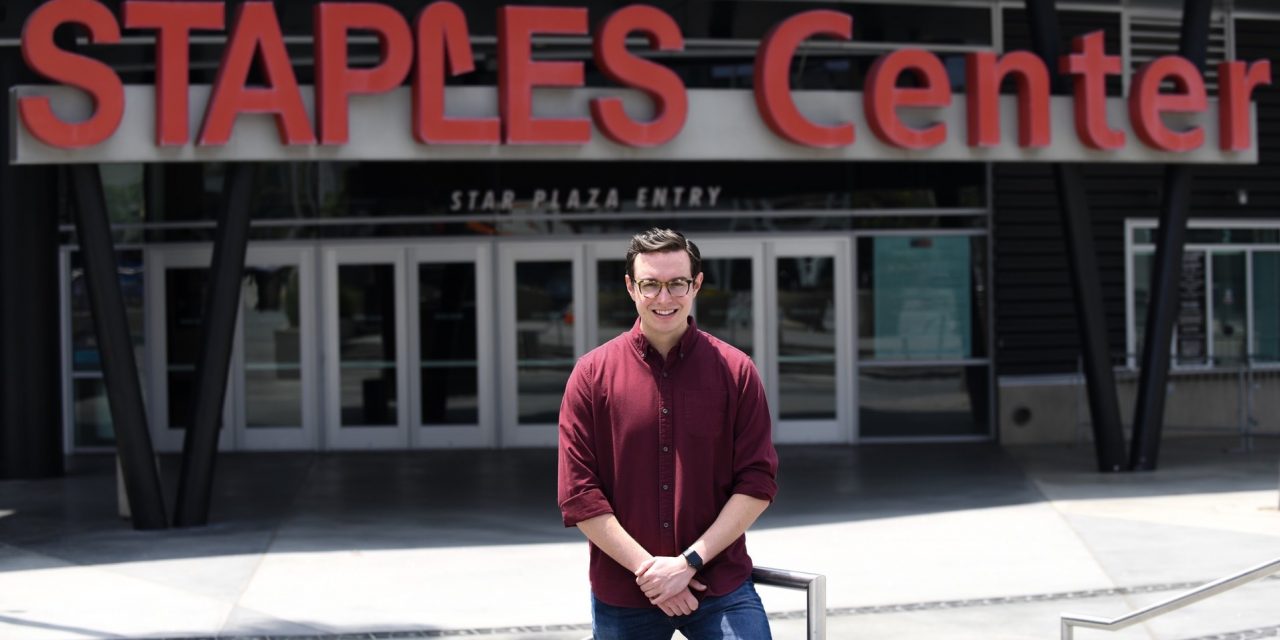 Andrew Saunders understands the art of the deal.

It’s in his blood. His dad, Dave Saunders, is the vice president of sales and marketing at iHeartMedia and has been on the business side of the music industry for decades.

It’s in every move he’s made in his career, starting with a prized internship at Goldenvoice through his latest role as senior talent buyer for Los Angeles’ Staples Center and Microsoft Theater.

It’s in the way he nurtures relationships with promoters and agents until he gets the show — at the price he wants.

At age 28, Saunders is quickly emerging as a major player. After a relatively short stint as the senior buyer for only the Microsoft Theater, his AEG bosses realized he excelled at picking out shows, often in genres that the venue didn’t have much of a history in, such as hip-hop and podcasts, and they added on the much larger Staples Center to Saunders’ workload.

Saunders was born in Orange County, Calif. His mom, Laurie Saunders, was a stay-at-home mom and is now a preschool teacher. He went to USC and studied music industry and business entrepreneurship. His first internship was with Goldenvoice at the El Rey Theatre.

His first paid job was as a booking assistant at Venue Coalition. He stayed there two years. His next post was at Gelfand, Rennert & Feldman, a business management corporation. Saunders was an on-the-road tour accountant, and his main client was James Taylor.

After a year and a half, Saunders went back to Venue Coalition as booking manager. He was promoted to director of booking in 2017 and left when AEG came calling in November 2017.

Hallie Yavitch is the vice president of booking at Staples Center and Microsoft Theater and has known Saunders for almost four years.

“Andrew is a tenacious guy,” Yavitch said. “When he was with Venue Coalition, he was a client of Rocket Mortgage FieldHouse, my former employer. Whenever I did a project with him, I was  happy about working on it. I have a lot of trust in him.”

Yavitch knew Saunders would be amazing at the job as soon as she heard that he was moving to AEG.

Yavitch pointed to “We Will Rock You,” the musical based on the songs of Queen that’s coming to the Microsoft Theater in October, as a perfect example of Saunders’ determination to secure a show. “Andrew spent months working on the deal,” she said. “It was his show. And a huge success for us.”

Saunders’ ability to listen to the clients sets him apart, she said. “He will point out that we have a curtaining system, or a deeper pit, something that will make our venue stand out and fit their needs. With Andrew it’s all about trying to get us the right content for our buildings. He’s playing the long game and he does it with a lot of integrity.”

Saunders likes to think out of the box, and he’s especially pleased when he gets to introduce a  new event to the roster, such as the “My Favorite Murder” podcast live show.

“It was perfect,” Saunders recalled. “I booked it for Halloween night 2018. All of the stars aligned — we had a murder show on Halloween in Los Angeles — and we went the extra mile by creating a photo op experience in the lower lobby where we re-created the podcast studio. We also had a custom rug designed for the stage. It was massively successful event and one of those  moments when booking and marketing came together perfectly.”

A bad day is “when we are losing money.” Saunders knows his ticket sales so well that just a few days after the on-sale he can tell if the show is a hit or a loser. “If sales are slow, we’ll get the marketing team and the artists management together and then it becomes a team conversation. The key is getting the artist to cooperate,” he said. “We always love it when an artist is willing to do some interviews or sign some guitars. Some artists will even offer to give back some of their guarantee to be used as extra ad money.”

Saunders is unclear what his next move will be, but he assures that it will be in the music industry; he’ll pursue it with persistence, and make a great deal.

“AEG is a company that has a ton of opportunity,” Saunders said. “Right now, I am halfway in between the venue route and the promoter route. I’m not entirely sure where I am headed at this moment, and I’m in no rush.”

“Now that I’ve paid my dues, I’m starting to really enjoy being part of this business,” Saunders said. “My relationships are getting really strong and have moved way beyond just business relationships. This is the really fun part.”