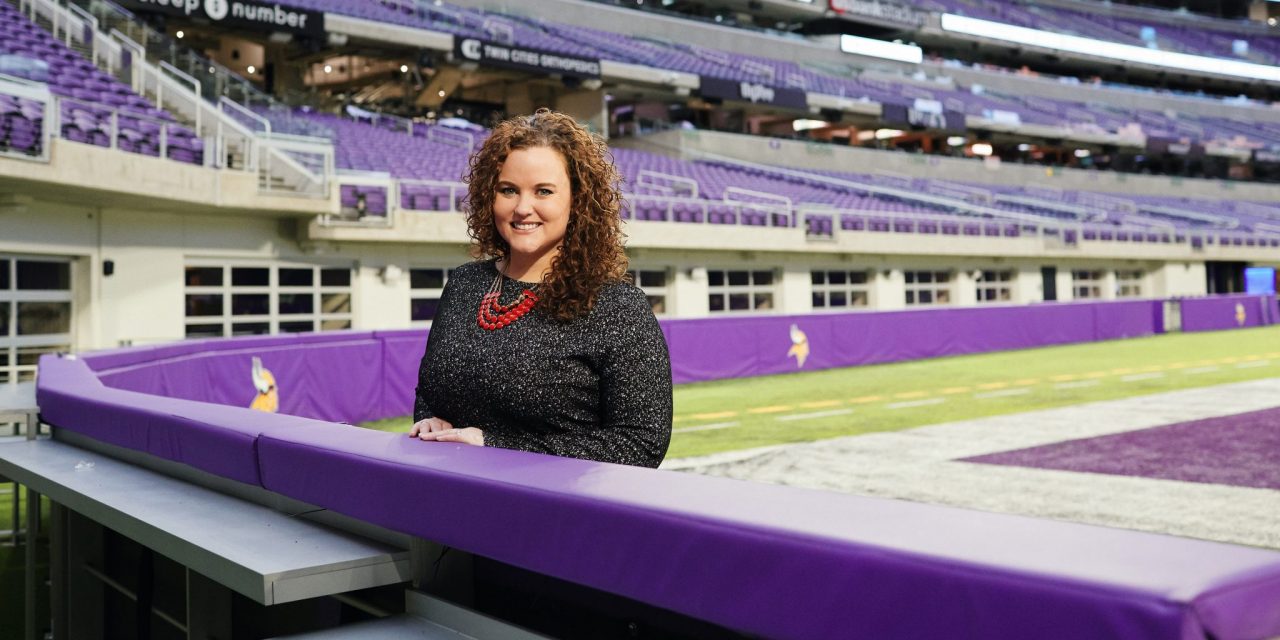 When Lisa Niess was a student at Iowa State, she landed an internship at Stephens Auditorium, a 2,700-plus capacity theater on the university’s campus. Before the experience, she’d never considered a career working at venues, but her eyes were soon opened to the possibilities.

“It didn’t take me long to realize how cool it was to be there on show night and to see the theater fill up with people excited to be there,” she said. “They’re taking a break from whatever else is going on in their lives to spend time with family and friends and to relax and enjoy themselves. And I realized quickly that that’s where I wanted to be.”

Today, Niess, marketing and communications manager for U.S. Bank Stadium in Minneapolis, helps create those enduring experiences for fans for the largest events in the business, ranging from the Super Bowl and Final Four to the industry’s most popular concert performers. Niess has led marketing and communications efforts for the facility’s non-Minnesota Vikings events since the runup to its 2016 opening, tackling tasks such as helping the sales team book events, overseeing media relations, guiding brand strategy and managing advertising.

Patrick Talty, general manager of U.S. Bank Stadium, said Niess possesses stellar marketing skills, a savvy sense for messaging and an acute attention to detail. He said she serves as a key adviser to the stadium’s leadership team and a “calm voice in the storm” when challenging media situations arise. However, he said her biggest strength is her passion for her job and the venues industry.

“She’s got a drive to excel and a real passion for this work,” Talty said. “That’s what really makes her great at what she does. She cares so much about getting everything right.”

Niess first had to leave the venues industry to realize how important it was to her. Following her graduation from Iowa State, Niess worked full time at Stephens Auditorium for four years, eventually rising to the level of marketing manager. When she and her husband moved to the Twin Cities area, however, she took a job at an advertising agency. She immediately recognized how much she missed her previous line of work. Fortunately, an opportunity arose with SMG, which then managed Stephens Auditorium, to join the team that would be opening U.S. Bank Stadium. Five months after leaving the field, she returned.

“I saw how passionate I was about the industry and how much I wanted to be involved in it,” Niess said.

Niess came onboard at U.S. Bank Stadium in April 2015 with the stadium about 55 percent completed.

“It was such a cool experience,” she said. “I had people telling me then that not a lot of people get an opportunity to open a building, let alone an NFL stadium, and looking back now I understand what they meant. … Opening the building was so much work but it was incredibly rewarding to see it come together.”

“It went so fast — it was just a whirlwind — but seeing the building serve the purpose it was meant to serve with such a variety of dynamic events right away was really fulfilling,” Niess said.

In U.S. Bank Stadium’s young life, it has already seen a lot — and so has Niess. She helped plan for the stadium’s turn in the global spotlight when it hosted the Super Bowl in 2018, and she has played her part in ensuring that visits from such luminaries as Kenny Chesney, Beyoncé and Jay-Z, and Taylor Swift have been successes. Talty points to Niess’ work promoting the U.S. Bank Stadium Classic in early December — the stadium’s first basketball games and an opportunity to prepare for the NCAA Men’s Final Four a few months later — as particularly illustrating her skill generating excitement for events.

“The town was really buzzing about those games and so much of it was because of Lisa’s media strategy and the work she did to get it out there,” Talty said.

Niess said her job keeps supplying her with new thrills. In recent months, U.S. Bank Stadium hosted the Final Four and back-to-back Garth Brooks concerts — both “bucket list items for me and my career.”

“You get to have these moments with these events when you see why everything you’ve done matters — why every detail of putting on these events matters,” Niess said. “That’s something I really value, and I love that I get that opportunity.”