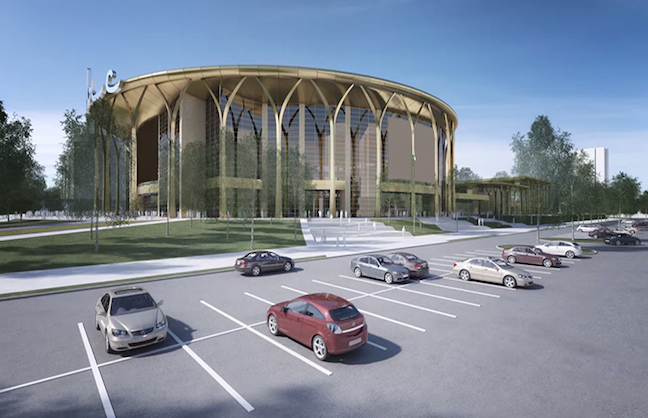 Named after the Barys professional hockey team based in Astana, Barys Arena features four concourse levels. It has 60 suites and a 300-person restaurant. Attached to the new arena are a new 6,000-seat swimming complex and a new ice-skating training facility. All three venues are state-of-the-art facilities with the most up-to-date technological advances and the latest in customer conveniences.

As Michel Sauers, president of GFS Associates, explained, this new complex is unique because it is part of a greater sports hub in Astana that also includes a 35,000-seat stadium with a retractable roof, and a separate velodrome with capacity for 3,000 spectators.

“The Kazakhstan government has identified Astana as the center for their sports training and competition, which they hope will gain them greater international recognition and visibility through sports,” Sauers said.

Located in central Asia, Kazakhstan is a former Soviet republic and is the world’s largest landlocked area. Astana, the capital, is the second-largest city in the country, with a population of 835,000.

The Astana Presidential Sports Club was established in 2012 to bring together, under a single management umbrella, all of the major professional sports organizations in the country and to provide state-of-the-art facilities in which athletes can perform.

In this agreement, the Astana Presidential Sports Club has retained GFS Associates to guide them as they strive to have the sports complex operate in the most professional and competitive manner possible for customers, performers, athletes and teams.

“Their goal is to provide first-class services comparable to the world’s leading venues, like Wembley Stadium or Madison Square Garden,” Sauers said. “They also want to secure major entertainment shows and talented performers to showcase for the citizens of Astana. These would include concerts, family shows, arena spectaculars and major professional and amateur sports events.”

According to Sauers, GFS Associates has a very unique relationship with their new partner and client. In addition to providing management consulting services, they are also incentivized to maximize the financial performance of the facility.

“We feel the trust they have in us will result in a very successful outcome for both my company and Astana Presidential Sports Club,” Sauers said. “The most exciting aspect of this project for us is to utilize the industry knowledge that the members of our team have gained over the past 30 years and seamlessly integrate that expertise into a marriage that incorporates our history with the wonderful traditions and customs of Kazakhstan and its people.”

While the arena is complete and is awaiting its final occupancy certification, the training facility and the swimming complex are expected to be completed in early winter 2015. A general manager is yet to be named.

Obviously, working with a client as far away as Kazakhstan brings a unique set of challenges. The language presents a difficulty, especially when a translator is not available. But the GFS Associates team is hoping to learn as much Kazakh as they can.

“Best practices of the public assembly facility industry that we take for granted are mostly foreign concepts in Kazakhstan,” Sauers explained. “Educating our Kazakhstan employees in Astana on best practices also will be an important effort for us. Our leadership team is studying the local customs and traditions.”

Sauers also recognizes the importance of tailoring their services to comply with the needs and desires of local customers.

“The huge time difference will keep us on the phone early in the morning and late at night,” Sauers said. “All of these are challenges, yes, but they're all very doable.”