Glitchy-Coo Park: Mobile Ordering Off to Rocky Start in MLB 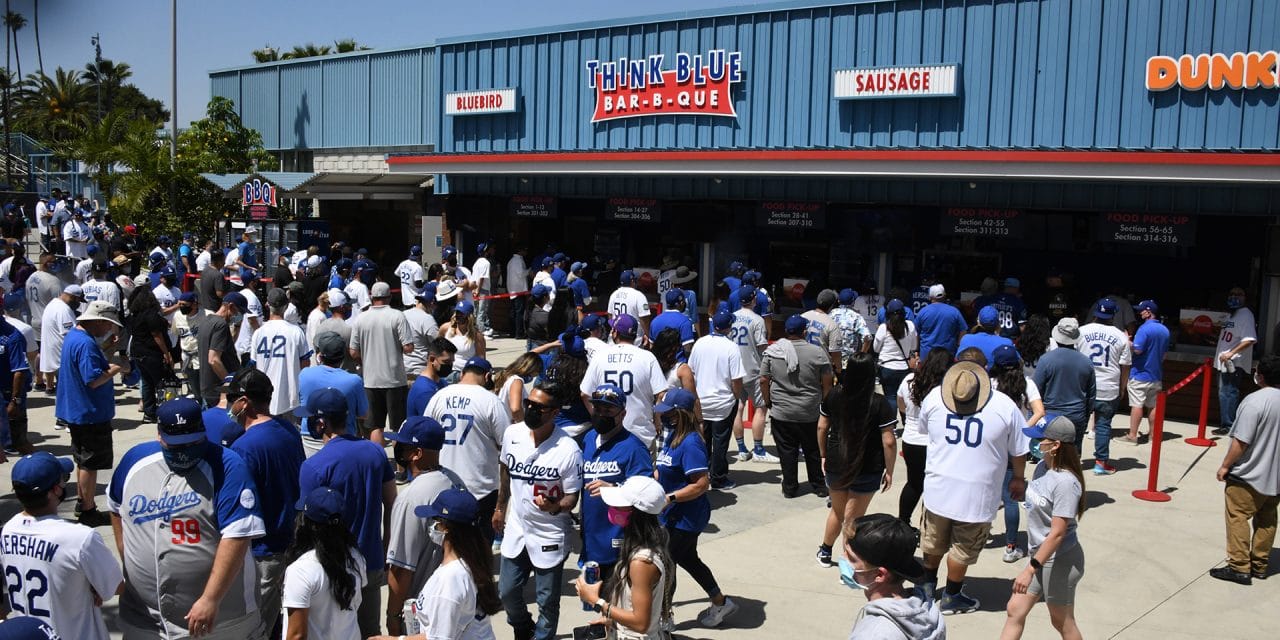 Despite some breakdowns, Oakland reports higher per caps

The sports industry’s push into mobile ordering for concessions got off to a rocky start as Major League Baseball opened its season. Glitches were reported at Wrigley Field, Petco Park and Dodger Stadium, where the system was shut down for safety reasons on Friday during opening day.

Fans in Los Angeles voiced their frustration with mobile ordering snafus on social media channels, posting photos of large groups of fans clustered together waiting for their concession orders to be fulfilled.

The Dodgers issued a statement late Friday afternoon saying that the team had “quickly disabled” mobile ordering and switched to traditional walk-up ordering, and that more food stands would open for future games.

Levy runs the food at Dodger Stadium and Appetize installed a new point-of-sale system in 2020 with mobile ordering capability. Across MLB, fans use the league’s At the Ballpark mobile application to order food and drink.

Glitches are expected with any new technology, but considering MLB and most sports venues in general have essentially turned the firehose on with the concept after testing it in dribbles over the past 10 years, the breakdowns are not all that surprising. The pandemic essentially forced teams and concessionaires to take a giant leap of faith with mobile ordering technology as part of their new COVID-19 protocols to drive cashless and contactless transactions.

“Food providers did not have much of a choice, but it’s still a mess,” food consultant Mike Plutino wrote in an email before the situation unfolded at Dodger Stadium. “Health departments created this mess and are likely having a worse outcome with people waiting around frustrated vs. being able to walk up to the counter and go. The mobile order platforms were built to supplement and provide an option — not be the sole mechanism.”

But that was the case for the most part at the three MLB parks in California, where state restrictions resulted in Oakland’s RingCentral Coliseum, for example, going all mobile ordering to start the 2021 season. The level of restrictions was tied to the state’s Blueprint for a Safer Economy, which features different colored tiers for how counties operate as the state re-opens for business.

In Oakland, Aramark was forced to close all concession stands for opening day. Fans used the MLB app exclusively, equipped with Venuetize technology, to order food and drink for in-seat delivery.

There were some glitches for Oakland A’s games, where attendance has been restricted to about 12,000, but the situation has improved with adjustments made on the fly, team President Dave Kaval said.

With restrictions on capacity at the coliseum, wireless infrastructure hasn’t been the issue with mobile ordering. The problem was that the mobile piece couldn’t keep up with the thousands of orders made every 10 minutes, he said.

“Mobile ordering has been a challenge due to the database hosting it,” Kaval told VenuesNow. “It couldn’t process enough orders quick enough. But that was fixed. What we found is that people would place an order and then go searching for it. People would end up congregating anyway, so it kind of defeated the purpose. It created a lot of customer confusion.”

Late last week, the state relaxed some restrictions on mass gatherings, allowing Aramark to open general concession stands and use seat vendors to sell hot dogs and beers for the next few games of the initial homestand.

For in-seat delivery, the issue has been having enough concessions workers to execute it.

“You can only have so many runners before you run out of people who can physically move the items quickly enough, and that’s a challenge as well,” Kaval said.

For the A’s second homestand, a seven-game stretch that starts Thursday, Aramark will deploy a hybrid system of mobile ordering and traditional concession stands. Despite the initial glitches, the A’s still believe in mobile ordering, Kaval said.

“The per cap we’re seeing is almost 40% higher for mobile ordering, which is positive from a business perspective,” he said. “We’re all trying new things. These are new restrictions and protocols and we’re just trying to do our best to make sure we create a great fan experience.”

From the worker’s perspective, it’s been a learning process as well, said Vince Pesha, vice president of a Chicago union that represents about 2,200 seat vendors, ushers, parking lot attendants and security officers.

At Wrigley Field and Guaranteed Rate Field, home of the Cubs and White Sox, respectively, hawkers roaming the stands are equipped with devices tied to the MLB mobile applications to execute and fulfill orders.

“Every day, it gets better at both ballparks,” Pesha said. “This is the first time the vendors have had access to anything like this, so it’s a little different. It’s not just the vendors but the people who originated the program that have to adjust to it. Same with the fans. Overall, I’d say we’re at 80% to 85% (success rate). It’s a good thing and people will get it.”