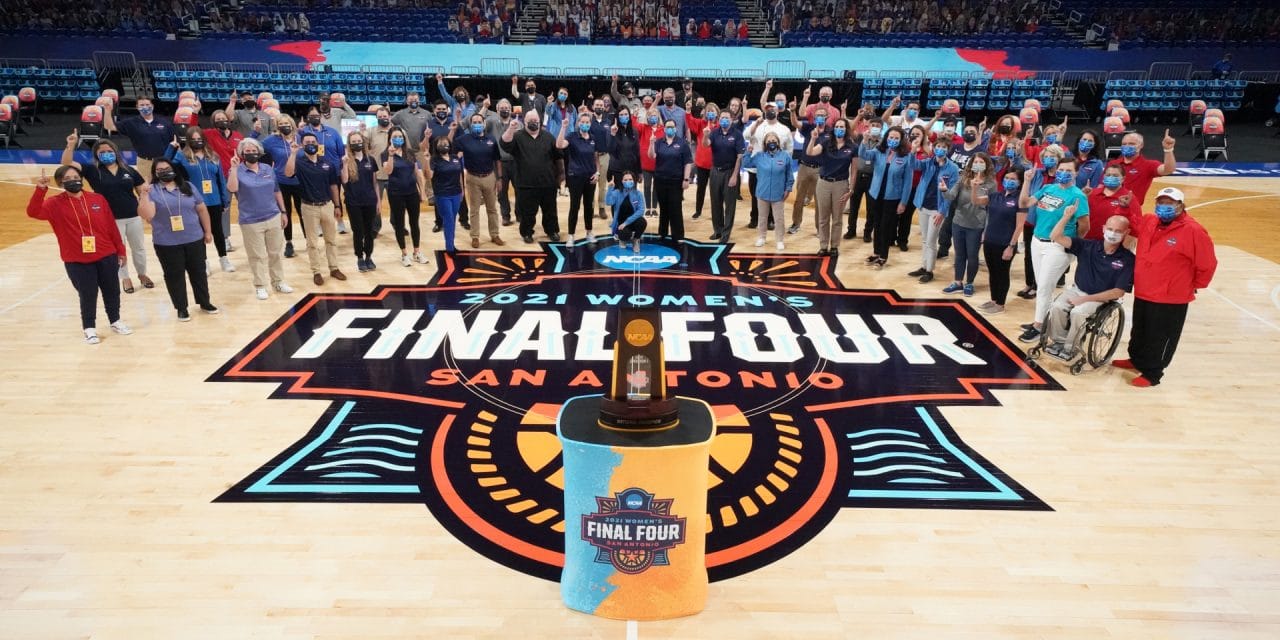 Not everything gets bigger in Texas. Over the past nine months, the Alamodome has restricted its capacity to roughly 17 percent to provide a safe environment for fans attending college football and boxing events, plus the recent NCAA Women’s Basketball Tournament.

While the Texas Rangers grabbed headlines this week for holding a full house at their Arlington ballpark for opening day, officials in San Antonio felt they did the right thing in a controlled environment for the NCAAs while putting people back to work in the city’s hospitality industry.

It’s been that way since the 65,000-seat Alamodome reopened in September with University of Texas at San Antonio football after using $1.5 million in CARES Act funding for COVID-19 retrofits, extending to 950 automatic flush valves and 450 automatic faucets in the restrooms. 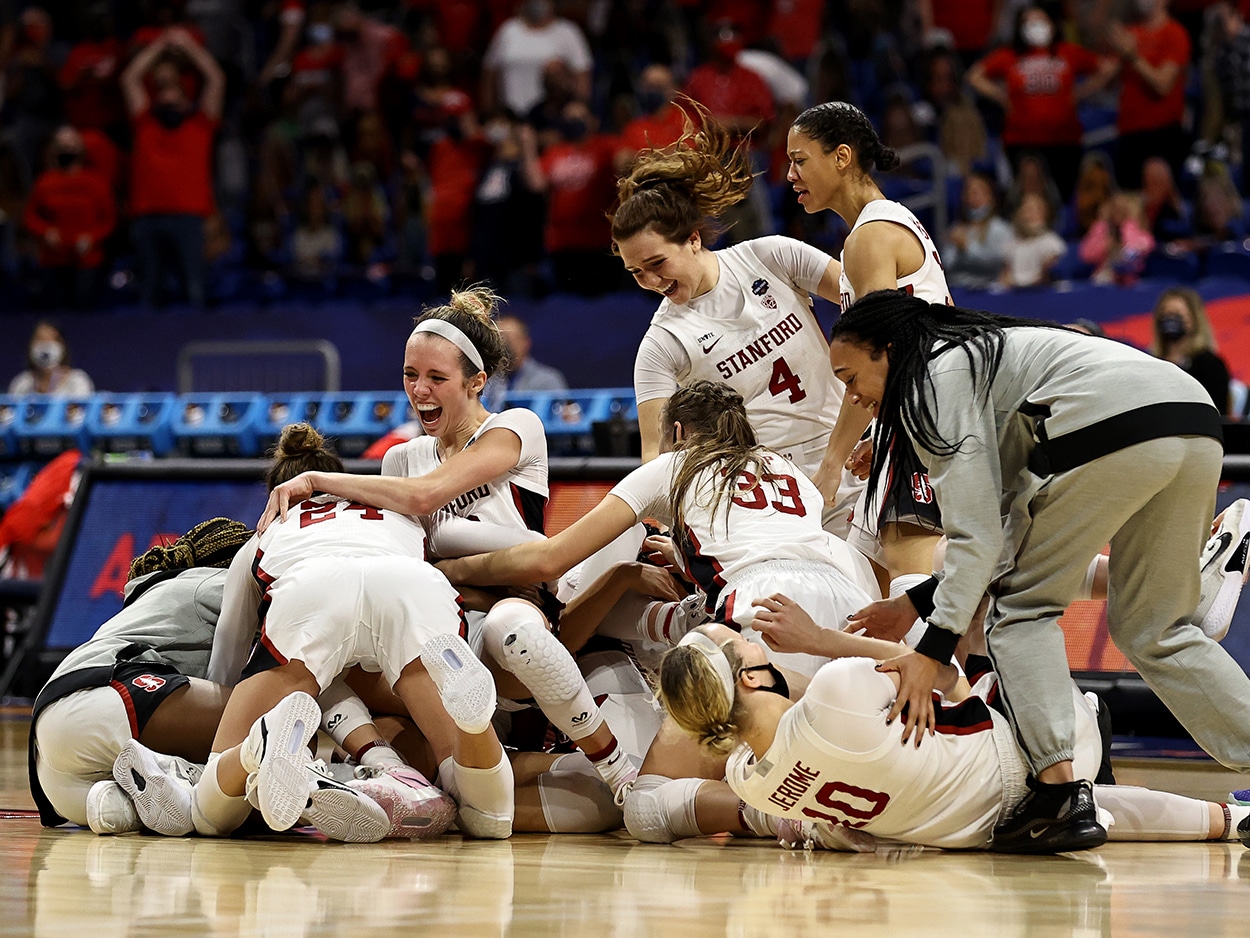 Stanford celebrates its championship Sunday night on the floor of the Alamodome in San Antonio. (Getty Images)

“With the exception of January, when everything spiked, we’ve been open ever since last fall,” said Steve Zito, the Alamodome’s general manager and a veteran operator with 28 years of experience.

“We were projected this fiscal year to do 108 events, and as of right now, we have 153 confirmed events,” Zito said. “We’re killing it. We may not be getting as many people in the building, but we’re busy and doing it in a safe and responsible manner. It laid the groundwork for what we needed to do for the NCAAs. This thing was confirmed six weeks out when we took on more of the entire tournament. We initially were awarded just the Final Four.”

As part of consolidating the women’s tournament, the NCAA bought out seven hotels in San Antonio. The move resulted in 35,000 room nights and kept hundreds of hourly workers busy at the hotels, and restaurants in town.

All told, the Alamodome played host to 35 women’s tournament games, including 20 games in four days. The event concluded with Sunday’s championship. Stanford beat Arizona before a crowd of 5,000 after the stadium’s upper deck was opened for the title game.

At the Alamodome, Zito developed a dual-court system in the building with two courts side by side for the NCAA to accommodate the sheer volume of games and individual team practices and make full use of available space. The setup gave Alamodome cleaning crews ample time to clean one temporary arena setup while a game was being played on the other side of the curtain at the second venue.

No fans were allowed to attend the tournament’s first two rounds, but patrons were permitted for the Sweet 16 and Final Four, all of which were held at the Alamodome. The stadium was restricted to 3,000 fans for the Sweet 16 before expanding to 5,000 for the Final Four.

“The building had to be ‘flipped,’ in essence,” Zito said. “When you have a Feld show, you have back-to-back performances. You do cleanup and get the building ready for the next performance. That’s what we had to do for the women’s tournament but in a (dual arena) configuration.”

He said, “It’s certainly the most comprehensive event I’ve ever done because of all the moving pieces. I’m so proud of our staff. We keep using the term ‘One Team’ because that’s how we operated, as one team. Not once did anybody complain; everybody just did what was right.”

The mission was accomplished while many full-time staff remained on furlough, Zito said.

On May 24, 2020, two months into the pandemic, the city furloughed 52 of 68 full-time stadium employees. Zito, his booking manager, the venue’s plumber, electrician and some security staff remained on the job.

“I took that really hard,” Zito said. “I was bound and determined that we were going to try to find a way to open the building in a safe way for everybody and try to get everybody back to work.”

The stadium was closed for about six months, although there were COVID-related events such as food distribution and blood drives in the parking lots. During that time, Zito and his remaining crew spent up to 12 hours a day, six days a week, to come up with a comprehensive reopening plan.

Early in the shutdown, stadium officials met with Valero Alamo Bowl and UTSA administrators in addition to city and local health groups to develop the plan. At that point, they weren’t thinking about generating revenue so much as just getting up and running again, Zito said.

In addition to college football and two high-profile boxing cards, the Alamodome served as the site of the Spring League, a developmental pro football organization. Six teams played a total of 24 games running from the third week of October to the end of November.

The Spring League had a broadcast deal with Fox Sports and Fox Sports 1, which helped with dollars trickling to the city’s hospitality sector through 7,000 room nights sold. Those events alone saved about 200 jobs across multiple hotels, according to information Zito received from Visit San Antonio, the city’s convention and visitors bureau.

Again, it wasn’t about money. It was about putting paychecks in hourly workers’ pockets at hotels and restaurants and trying to keep things going at such a dark time, Zito said.

In addition to holding sports events, the Alamodome serves as a mass vaccination site for up to 9,000 shots a day. Plus, it’s the contact tracing center for the city of San Antonio and Bexar County. For that operation, officials set up 450 workspaces in the event-level multimedia room.

“That’s huge to us and where we want to keep it,” Zito said.

It helped that the Alamodome came up with one master seating manifest for all events, connected to the 6-foot social distancing guideline as set by the federal Centers for Disease Control and Prevention. The stadium blocked off 54,000 seats not used for events with “seat shields,” which are basically garbage bags with double-sided tape.

The seat shields cost about 50 cents each, less expensive than using cable ties to block off seats, Zito said.

“If we were in the business for every event trying to create a seating manifest individually, it would be almost cost prohibitive,” he said. “It took an awful lot of time to do that, but we needed to make sure (it was safe). It’s either 6 feet or a percentage of capacity. You can’t have both. We did the most responsible thing, based on 6 feet.”

Looking ahead, Zito hopes the Alamodome will be at 100% capacity by late summer. The stadium has two concerts scheduled, Def Leppard/Motley Crue/Joan Jett/Poison (Aug. 20) and Rammstein (Sept. 24).

Both shows were rescheduled from 2020. To date, both concerts have sold 25,000 tickets.

“As more people get vaccinated, those percentages keep increasing and when we can start opening more seats, but we’re just not there yet and that’s what city leadership is evaluating,” Zito said.