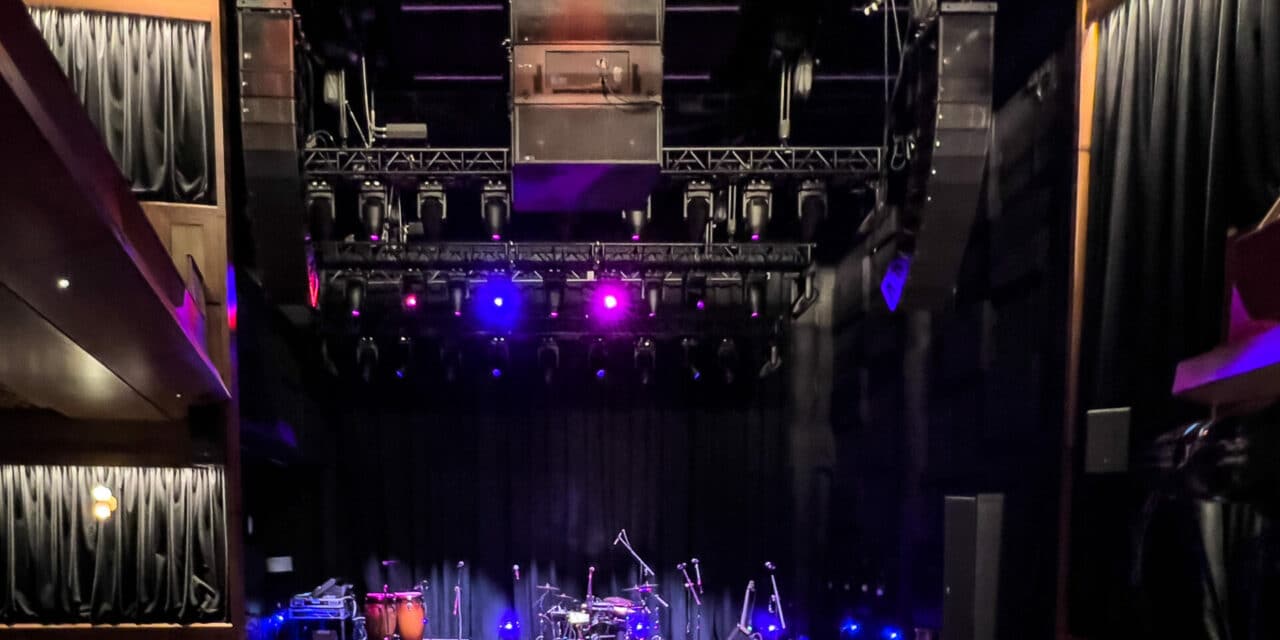 The Guild Theater in the Silicon Valley city of Menlo Park, California, can host around 500 guests and features a top-notch Meyer Sound system. (Photo by Paige Parsons.)

Backers seek a niche between San Jose and San Francisco

The Guild Theater in Menlo Park, California adds another live entertainment venue to the San Francisco Bay Area, but Drew Dunlevie, the man behind the club, sees it filling a need on what’s known as the Peninsula, south of the city proper.

“If you look at the geography of the area, there isn’t a lot of culture, there isn’t a lot of live music or comedy on the Peninsula,” Dunlevie said. “So there’s the city and San Francisco’s full of stuff. And the East Bay has their own stuff in Oakland and Berkeley. San Jose has a few things. But in this corridor of Burlingame, Redwood City, Palo Alto, Mountainview, there’s just nothing there. There’s nowhere to go see a national touring act ever. So we think in many ways we’re a separate market from all those others.”

“I know that very often a tour will consider the Bay Area to be one stop,” he said. “And that would be the Fillmore or, they might not play our place. But there’s enough talented people making music these days that we think we can serve those folks. There’s interesting things with bigger artists in an underplay situation where folks are here to raise the money for their causes.”

It’s taken several years for Dunlevie to complete his vision for The Guild. The idea of bringing a venue to Menlo Park first began a decade ago, but it did not become a reality until five years ago.

“We formed our nonprofit in late 2017,” he said. “I think we finished all of our city entitlement stuff with the city council and planning commissioning in early ‘18. We tarted the construction in ‘19.”

Once the ball got rolling and Dunlevie settled on aiming to buy and renovate the Guild Theater, which had formerly been a dilapidated movie theater in the area, things started moving fast.

“It happened pretty quickly. We had a couple of other places we could have potentially done it. But once we got the idea that this could work and we could option the building from the previous owner, this is what we chased.”

The Guild Theater held a soft-opening on Feb. 24, with a larger grand-opening featuring a performance by Robert Glasper taking place the next evening.

The interior of the building had been designed by celebrity designer, Ken Fulk. With a resume that includes designing the Battery Club in San Francisco, Carone in Miami, and regular listings in Architectural Digest’s Top 100, Fulk has made a name for himself. He met Dunlevie and others involved with the Guild Theater through one of the venue’s donors, and offered his design services for free.

The inside of the venue brings both a modern and vintage feel. The ceilings are decorated with intricately designed wooden panels that layer atop one another. A midcentury-modern chandelier hangs over a theater bar. A large green room sits in the newly built basement of the building with luxurious bathrooms, a kitchenette, washer and dryer, vanities, and a long leather couch.

The Guild Theater’s sound was installed by Meyer Sound – the same team behind Metallica’s sound systems. With the venue only able to host about 500 people, audience members can see the stage and hear the show from all angles.

Inside the venue are three bars: two on the first floor and one on the balcony. Dunlevie wanted to ensure that audience members wouldn’t have to wait long in line for drinks, and each bar is near the stage.

Menlo Park is home to tech monoliths such as Facebook and Google, but when it comes to live music, the area is notably lacking. Dunlevie set out to fill the gap to bring something new to the town, and he settled on the location for his own convenience as a Menlo Park resident, and that of all the venue’s donors.

“Our donors and most of our friends live within a mile or two of the venue,” he said. “The fact that it was a movie theater that was probably going to go out of business, sort of implying that it was ultimately at least for culture made a lot of sense. I live in Menlo park and got to know the Menlo Park city council and we wanted to make our town better.”

The venue itself is a nonprofit. The mortgage is paid off, and it cost $35 million total to buy the building  and remodel the interior. The goal is to break even, Dulevie said.

“I would say that’s the difficulty of the business, it’s a hard, hard business,” he said. “If you talk to any independent club owner, it’s a tough business. We wanted to build something special. To do that, it would take a large amount of money that could probably only be raised in Silicon Valley, from these incredibly generous people that just want to make the area better.”

Dunlevie understands many headliners passing through the Bay Area would be drawn to larger venues such as the Bill Graham Civic Auditorium, Shoreline Amphitheatre and Chase Center, an NBA arena. However, with The Guild Theater’s non-profit status, the venue hopes to draw artists in by supporting their foundations.

“Artists are, by nature, incredibly thoughtful, caring, people,” he said. “There’s a lot of people in the world that need a little help. We think we can help that way.”