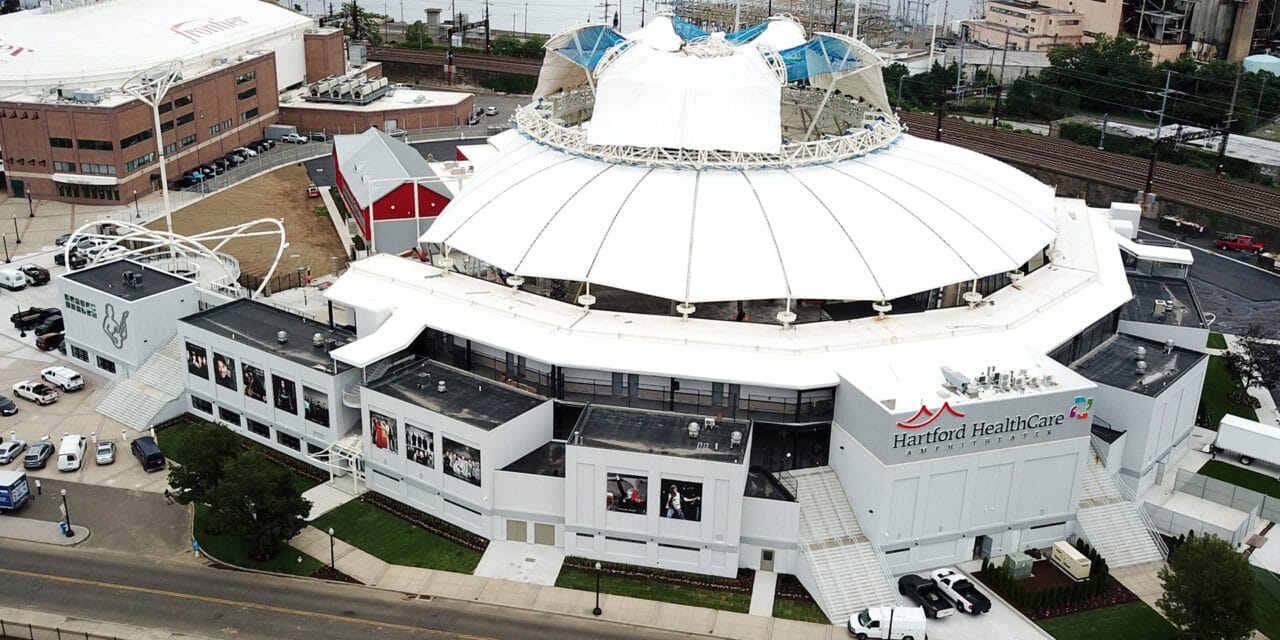 The $30 million-plus retrofit of the 23-year-old minor league baseball stadium opened Wednesday (July 28) with REO Speedwagon and Styx. It’s the first of 20 concerts scheduled this year at the 5,700-capacity facility.

Developer Howard Saffan, former president of Webster Bank Arena, which sits next door to the amphitheater, teamed with the city of Bridgeport to fund construction of the ballpark’s conversion into a concert venue.

The city owns the facility, which opened in 1998 for baseball and has sat empty the past four years after the Atlantic League’s Bridgeport Bluefish moved to High Point, North Carolina. The city contributed $12 million to the project that has doubled in cost from original estimates, according to local reports.

Live Nation, under the direction of Jim Koplik, president of its Connecticut group, is programming the building. The amphitheater has its own operations group running the venue.

From all appearances, it looks like the three parties got their money’s worth.

The development team took advantage of the ballpark layout to create a unique venue with dugout bars, three VIP lounges with marble and granite finishes and production amenities for touring artists such as the star suite “apartment” that surpass traditional amphitheaters, Koplik said.

The centerpiece is the roof structure, spanning 60,000 square feet. It covers 92% of the venue and serves as a difference maker for the facility, Saffan said. 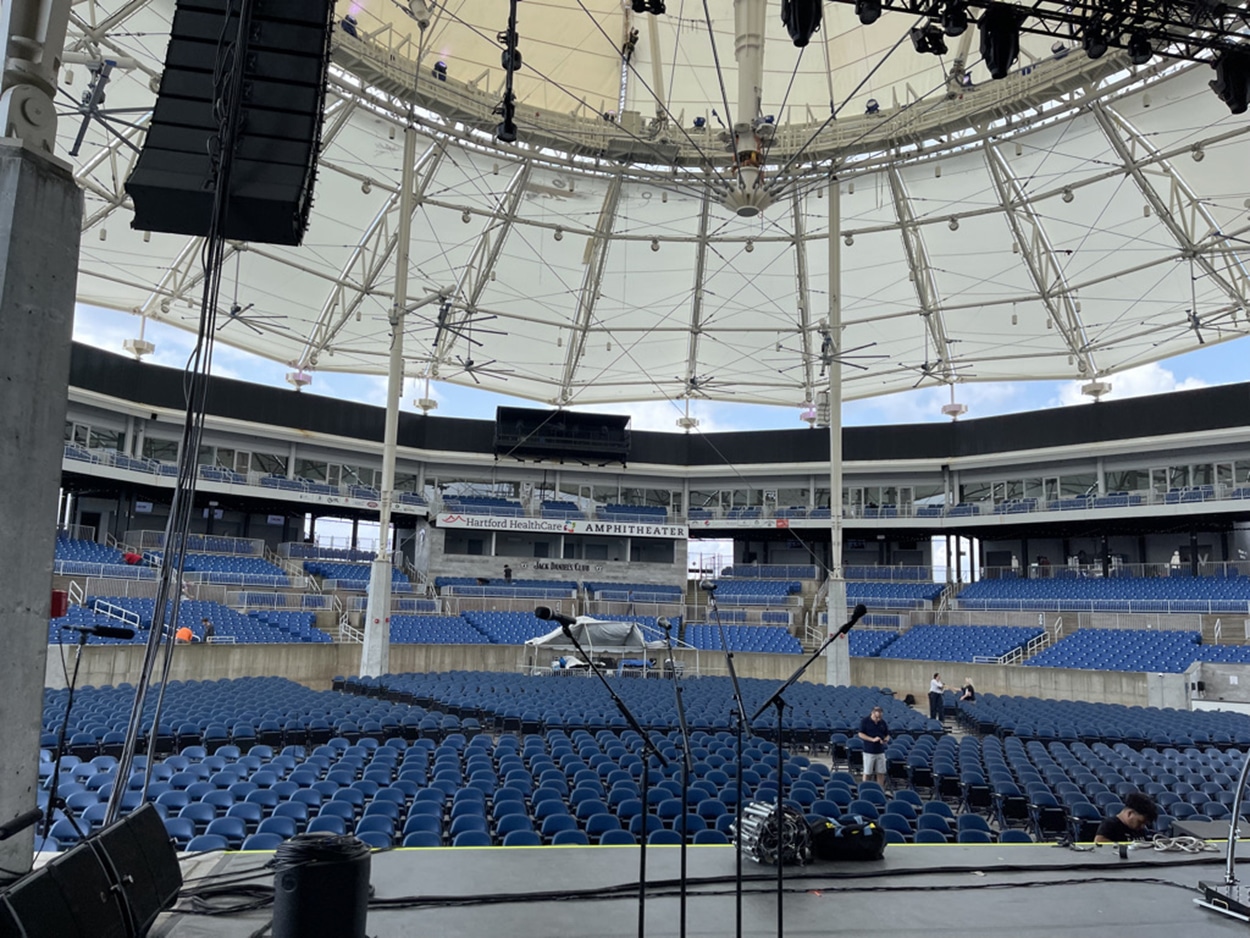 The amphitheater was ready to go for Wednesday’s REO Speedwagon-Styx concert, the first of 20 shows booked at the Bridgeport venue. (Courtesy venue)

“We haven’t spared a nickel,” Saffan said. “Everything is high end. We’re in Fairfield County, one of the wealthiest counties in America, catering to a very affluent market. This project is very meaningful for us. We’ve both been doing this a long time and this is kind of a legacy project.”

Koplik, a 50-year concert promoter, was instrumental in launching the project. Eight years ago, Koplik and Saffan had their monthly lunch date when Koplik told him the future of the live music business was boutique amphitheaters.

He believed there was a need for smaller outdoor venues in outlying markets such as Bridgeport, which sits about 60 miles northeast of New York City. Koplik has lived in Fairfield County for 40 years and grew up in nearby Westchester County, across the New York state line.

Initially, Koplik set his sights on building an outdoor venue in Danbury, Connecticut in the southwest part of the state before turning his attention to Bridgeport, which is more centrally located.

“About five years ago, I read that the baseball team playing in the stadium was doing very poorly, and asked Howard if he would contact the mayor of Bridgeport at the time and see when the lease ends,” Koplik said.

Over the next 18 months, Saffan left his arena post and a new mayor was elected in Bridgeport. During another lunch date, they revisited the idea and Saffan made the decision for his company to serve as lead developer, working closely with Live Nation on the retrofit and layout.

Saffan’s office at the arena overlooked the stadium and he started a dialogue with the city about its potential as a concert venue.

“In 20 years, the Bluefish never made any money, which wasn’t healthy for the city and the team owners,” he said.

The city issued an RFP for redeveloping the ballpark and Saffan’s team was awarded the project over the Bluefish, which wanted to extend their lease for one more year, and a third proposal to build a small soccer venue on site.

Construction started in 2018 and was delayed one year by the pandemic.

The roof, a key element, is among the final pieces put in place.

Koplik said he would not have committed to the project without a roof. That’s the difference between Bridgeport and New Haven, Connecticut, where a pro tennis stadium was converted to the Westville Music Bowl, he said.

“I don’t believe in boutique amphitheaters without roofs,” Koplik said. “They tend to (book) more classic rock, artists that used to sell out arenas and have stepped down to the boutique level. Generally, the audience is 45 and above, and the concept of getting rained on at that age is not fun anymore.”

Koplik is familiar with the fiberglass membrane roof concept after building one at Darien Lake Performing Arts Center in Greater Buffalo, a large amphitheater Koplik built. The lifespan is 20 years and air flow is much better than a hard roof, which reduces the heat factor, he said.

Saffan has been in the construction business for 30 years and he said the inspiration for the Bridgeport roof came from the PTFE roofline at Denver International Airport, which opened in 1995.

The material is durable, flexible and functional, he said.

“I grew up in Long Island and they have Jones Beach (amphitheater),” Saffan said. “When it rains, it gets flooded. In today’s world, with ticket prices being what they are, people aren’t comfortable paying a few hundred dollars for a ticket and then they get rained on. That was the theory behind building a covered structure.”

FTL Design Engineering Studio specializes in creating innovative roof structures and Goldsmith has worked on about 20 outdoor concert venues along with a few sports facilities.

“What’s unique about this one is it was a sports stadium but its use became so different,” Goldsmith said. “How do you turn it into a music facility and not make it feel like it’s just a wide open space?”

The answer was designing a concrete, steel and cable system to support the roof structure, which hangs 125 feet in the air. PTFE makes up most of the roof itself with ETFE material used for the center skylight portion.

“You could tear down the whole stadium and build something brand new, but it’s a lot of wasted carbon and extra work,” Goldsmith said. “It’s (a case of) surgically going in there, taking out what you don’t need, re-doing it with a light (roof) cover, and now you’ve got something that’s a 21st century facility in its place.”

The 100-foot stage and elaborate production facilities extend from second base to the outfield.

D&B Audiotechnik produced the sound system. Digital Projection made the four videoboards featuring the newest 4K resolution. The floor holds between 2,600 and 2,700 people with portable chairs set up for shows. The balance of seating is in the stadium bowl.

Saffan and Koplik both extolled the back-of-house bells and whistles across a 25,000-square-foot compound.

There are four production offices, a laundromat for the road crew and six dressing rooms that come with showers and a makeup area, plus marble countertops and toilets.

The green room has a 3,000-square-foot dining lounge, video games and pinball machines, plus an outdoor patio with a fireplace and BBQ pit.

“Backstage is the best I’ve ever had,” Koplik said. “Big rooms, an outdoor deck and the star’s apartment. From that perspective, it will become one of the most loved venues by the artist.”

There’s also the Jim Koplik Club named for “Mr. Connecticut.” The room, accessible to the public, is filled with memorabilia, such as a signed poster from the Allman Brothers Band’s final concert in 2014, a guitar autographed by Charlie Daniels and setlists, tickets and a Billboard magazine cover signed by Billy Joel, all tied to his 10-show residency at Mohegan Sun casino in 2008.

For those paying the freight, the ticketed patrons, the venue went upscale with concessions. Aramark runs the food and the vendor brought in two renowned regional brands, Pepe’s Pizza, and Hoodoo Brown BBQ.

Two Roads Brewing Company, Connecticut’s biggest craft brewery, has a tasting pub that seats 400 people. The Corona Beach House runs along the third base line. The Bluepoint Club, named for another local brewery, sits along the first base line.

Overall, there are 70 bars and 146 points of sale at the cashless venue.

“This isn’t just a basic venue where 90% of sales are liquid and 10% is food,” Koplik said. “We have a whole space for food trucks besides the specialty foods. If we can get the split to 80-20, we’ve done a great job. But people still like going to a concert and having a beer.”

Twinkling lights hang above the lower and upper concourses, reminiscent of the Feast of San Gennaro, a church festival in New York City’s Little Italy neighborhood. As a young boy, Saffan attended the feast with his father.

“This is my translation of that event to our place,” he said.

The goal is to book 75 annual events from May through Halloween, including 30 concerts. The balance would be graduations, college fairs, beer festivals and church services and family shows, Sagan said.

The venue is close to booking a World Wrestling Entertainment event, most likely in October.

WWE headquarters are in Stamford, Connecticut, a 30-minute drive from Bridgeport, and during Saffan’s tenure running the arena, he got to know the McMahon family well.

The amphitheater is directly off Interstate 95 and there’s parking for 5,000 vehicles. Patrons can also get to the venue by the Port Jefferson Ferry from Long Island and by rail lines served by Amtrak and MetroNorth.

Across the Pequonnock River, a mixed-use development is underway. Between the amphitheater’s 75 shows and the arena’s 100 events, including the American Hockey League’s Bridgeport Islanders, officials feel they can build enough critical mass to support further development.

“That’s the beauty of this type of venue,” Saffan said.