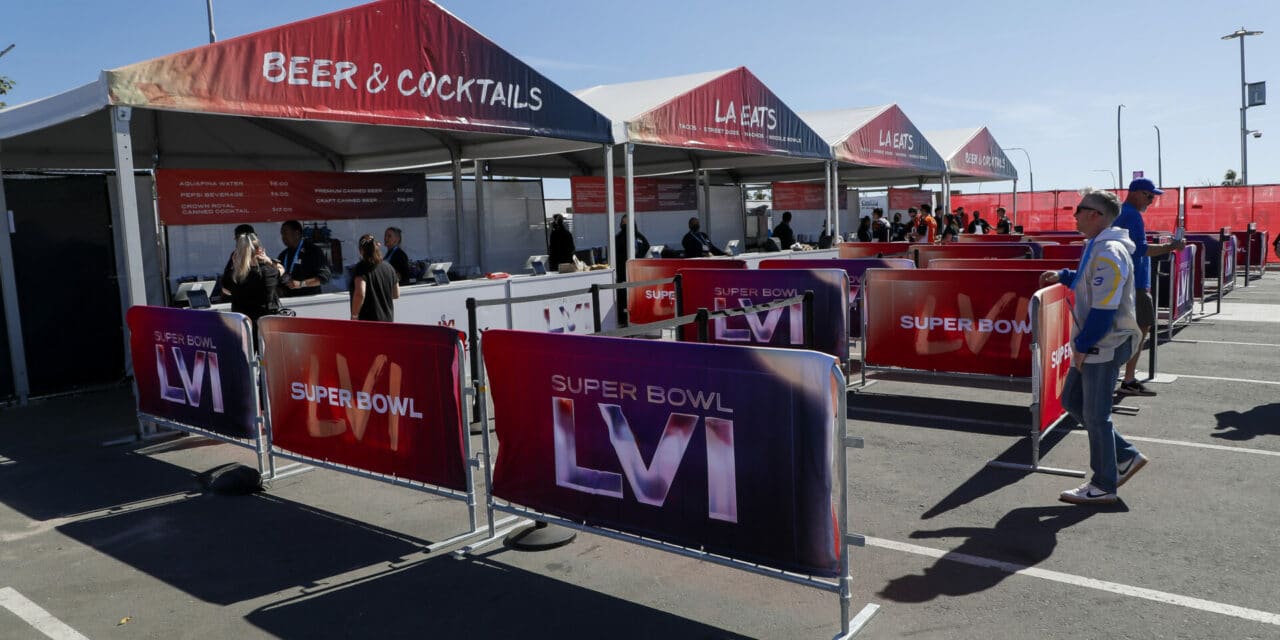 BIG FOOT-PRINT: SoFi Stadium, host of Super Bowl LVI, is part of the 300-acre Hollywood Park campus, providing plenty of space for concessions inside and outside the venue. (Getty Images)

Legends Hospitality reported a record-breaking Super Bowl per cap of $167.37 for food, drink and merchandise at SoFi Stadium, driven by Hollywood Park’s 300-acre footprint and the NFL’s ability to keep crowds flowing through the venue itself, said Dan Smith, president of the foodservice group.

The numbers set a record for a full-capacity crowd, according to Legends officials, up 14% from the previous record set at Super Bowl 50, which took place at Levi’s Stadium.

Gross sales exceeded $11.7 million based on official game attendance of 70,048.

All told, Legends, which is owned in part by Dallas Cowboys owner Jerry Jones, generated more than $18 million in revenue for all NFL-related activities. The overall number extends to the NFL Shop presented by Visa, a 30,000-square-foot pop-up retail space that was part of the NFL Experience at the Los Angeles Convention Center, plus 30 hotels carrying merchandise.

Retail sales for the 2022 Pro Bowl in Las Vegas are also part of the $18 million figure.

At SoFi Stadium, the halftime show, showcasing the best of Los Angeles’ hip-hop and rap community, including Snoop Dogg, Dr. Dre and Mary J. Blige, most likely factored into an extended sales period late in the game, which is not typical for Super Bowl, Smith said.

“We had a large visiting team contingency that was not used to that type of facility, so they got there early and spent many hours at the venue,” he said. “We were still selling food and drink in the fourth quarter at a brisk pace. I’m just speculating, but it was a pretty interesting halftime show and people stayed in their seats. We started to get the push right after the halftime show.”

Smith said the average spend for food and drink alone was significantly higher than the previous record of $95.41 set by Aramark at Super Bowl LI at NRG Stadium in Houston, although he could not disclose the specific number. Pricing wasn’t much higher than past Super Bowls, Smith said.

“Merchandise was also up, but not by the same magnitude,” he said. “Food and drink was off the charts.”

Inside the stadium were 900-plus points of sale between permanent stands and mobile handheld units. There were 24 merchandise locations and a dozen portable retail trailers outside the building.

“We had the footprint enlarged for the NFC championship game (at SoFi), so we didn’t do much more outside of what we’ve done before,” Smith said. “The building is designed with so many permanent points-of-sale, it didn’t look like we added much in ancillary portables to do that type of volume. The physical plan was laid out so well that we could flow people through the lines pretty quickly.”

Part-time labor, which has been a thorn in the side of concessionaires during the pandemic, was not an issue. Legends has a major presence in southern California and runs the food at Los Angeles Memorial Coliseum. But a Midwest snowstorm a few days before the Super Bowl affected the delivery of merchandise, Smith said.

“We were on this thing from last April placing orders,” he said. “It was the transportation part of the supply chain that challenged us. Everything eventually got there, but instead of it being there early in the week to be distributed a little more evenly, everything got there just in time.”

Next year’s Super Bowl is at State Farm Stadium in Glendale, Arizona. Legends will sell merchandise again for the event. Craft Culinary Concepts, a Phoenix-based foodservice firm, runs food and drink at the facility.