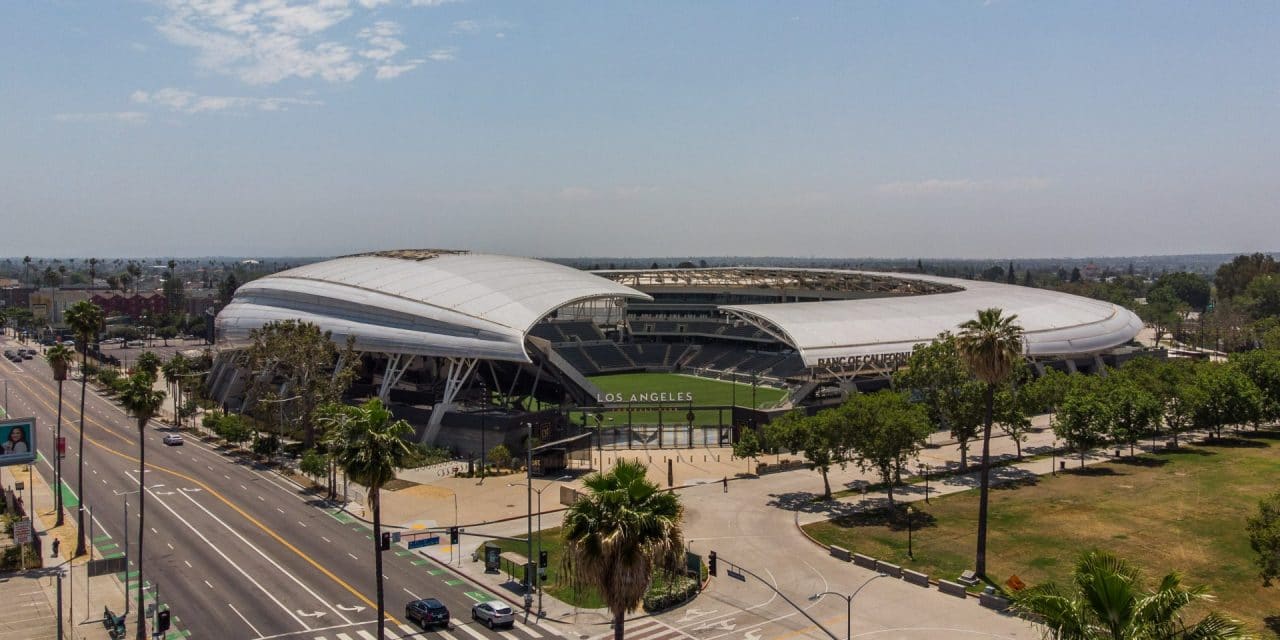 NEXT BRAND UP: Legends is looking for a sponsor to replace Banc of California’s name on LAFC’s stadium. (Getty Images)

The naming rights market is busy in Los Angeles, where three venues are searching for deals.

MLS franchise LAFC is looking for a new naming rights partner after Banc of California announced in May that it was terminating its stadium agreement two years into its deal. The bank remains LAFC’s official banking partner.

Legends, which brokered Banc of California’s 15-year, $100 million deal, is filling the role again on behalf of LAFC.

Across town, CAA Sports is consulting for the NBA’s Los Angeles Clippers to sell naming rights for their prospective arena and the Forum, which Clippers owner Steve Ballmer acquired earlier this year from The Madison Square Garden Co. Come 2024, the year the Clippers hope to open the venue, the buildings would sit a few blocks apart in Inglewood.

“They all have something unique to offer,” said Dan Griffis, president of OVG Global Partnerships. (Oak View Group owns VenuesNow.) “LAFC has done a heck of a job developing their brand in the LA market. They have a new building and an avid fan base, and those are two good things to have for selling naming rights.”

For LAFC, it’s good to have a building that’s developed a reputation as multipurpose in a relatively short period of time. Team officials hope to sign a long-term deal in time for the 2021 MLS season, with terms greater than the $6.67 million a year the bank paid, said Larry Freedman, LAFC’s co-president and chief business officer.

The value of the Banc of California deal was the highest for naming rights in MLS, and the depth of programming LAFC has put in the building since it opened in April 2018 bodes well for a new partner, according to Freedman.

The stadium is essentially an “outdoor arena” considering all the concerts it’s held, he said. The team owns its staging system. Shows set up in the north end after the removal of part of the safe-standing section for the soccer team’s supporters. The stage has a rigging system that attaches to the roof. Semi trucks unload equipment by driving down a ramp that was retained from the old Los Angeles Sports Arena.

Over the past two years, the iHeartRadio and Wango Tango festivals brought “some of the biggest stars on the planet” to perform at the stadium such as Ariana Grande, Post Malone and Cardi B, he said.

For 2020, the team booked Santana, Maroon 5, System of a Down, The Killers and Zac Brown Band. Most of those shows are rescheduled for 2021. Guns N’ Roses was originally set to play this year at SoFi Stadium, the NFL stadium opening in Inglewood, but relocated the show to Banc of California Stadium when it was rescheduled.

Apart from concerts, Banc of California Stadium is part of the Los Angeles bid for the 2028 Summer Olympics and the 2026 World Cup. It’s also in the mix for Super Bowl hospitality when the NFL’s championship comes to Los Angeles in 2022.

In some respects, LA has always been a competitive market based on the large number of big league teams that call the city home, Freedman said. The LAFC franchise was announced in October 2014, two years before the Rams announced they would relocate to Los Angeles and build a new stadium. The Chargers joined them later as a tenant.

“We’re a different proposition and we feel pound for pound that we’re kind of the Manny Pacquiao of opportunities based on the quality of the venue, the mix of events and the value we can drive for a partner,” he said.

As the pandemic has unfolded, it’s difficult to know when fans will be allowed to fill arenas and stadiums for sports and entertainment again. The level of uncertainty extends to the brands as well, he said.

“We have to be open and transparent with each other,” he said. “There’s more value if we’re playing in front of a full house. It’s likely we’ll end up in conversations where we’re taking some of those variables into account.”

During the shutdown, LAFC signed new sponsorships with biometric security company Clear, ExtraMile convenience store and Fuelster, a fuel delivery brand. Clear signed on as the team’s protection partner, providing disposable masks and hand sanitizer for its fan base when they’re allowed back in the building.

“One thing we’ve learned in this process is that brands, especially of the size that do naming rights, were well aware of Banc of California Stadium before we called them,” Freedman said. “It’s not a secret. It is possible to get it done in this environment.”

Elsewhere in Los Angeles, CAA Sports is targeting a naming rights deal valued at $20 million a year for the Clippers’ project. The agency sold Chase Center’s naming rights in a 20-year deal valued at $19 million annually, and Griffis thinks the numbers in Inglewood will most likely exceed the terms for the San Francisco venue.

“It’s got to start with a 2; anything less and Ballmer is making a mistake,” he said. “It’s the NBA (and) it’s LA, which is the No. 2 media market. They have every opportunity to do it. Golden State got it done. Why not LA?”

CAA Sports is also selling naming rights for the Forum, which Clippers owner Ballmer bought for $400 million earlier this year. Sources said CAA Sports is targeting a five- to 10-year deal for the Forum valued at $5 million to $10 million annually.

The two deals are being shopped concurrently and there could be an opportunity for one company with multiple brands to sign naming rights for both arenas, said Paul Danforth, president of CAA Sports.

“They’re two distinct, different offerings,” Danforth said. “We’re not packaging the two together, but I wouldn’t rule it out if a family of brands wanted to ‘own’ both venues. We could certainly look at a deal like that.”

CAA Sports hopes to have both deals signed by the time the Clippers break ground on their new arena next fall. Danforth declined to discuss financial numbers.

The Forum opened in 1967 and had one of the early naming rights deals in sports when it was branded as the Great Western Forum in 1988. The bank’s 15-year deal expired in 2003.

For the 17,505-seat Forum, the naming rights equation presents an interesting scenario for a building that’s become a top concert venue after MSG spent $100 million to upgrade the building. Ballmer acquired the Forum to settle a legal skirmish between the Clippers and MSG over the team’s plan to build a new arena down the street.

The Forum reopened in 2014 after MSG’s renovations. Last year, it placed fifth in ticket revenue among North America venues with a capacity of 10,001-15,000, Pollstar data shows. The arena’s 80 shows produced 840,205 tickets sold.

It has not had a sports tenant since the Los Angeles Lakers and Los Angeles Kings left for Staples Center in 1999.

The idea of two arenas with 17,000-plus seats sitting a few blocks apart four years from now has led to speculation that Ballmer will ultimately tear the Forum down and sell a valuable piece of land for commercial development. The Clippers, however, say they remain committed to keeping the Forum open.

“It’s certainly valuable for someone to be associated with an iconic venue,” said Rob Yowell, president and founder of Gemini Sports Group. “I don’t think it’s going to be a huge number. It lends itself to a secondary brand, maybe a tech company or someone that has a product that they really want to promote in the live entertainment space. A five-year deal gets them some press and bang out of it.”

A group of CAA Sports’ executives in Los Angeles, New York, Europe and China are working on both the new Clippers arena and the Forum deals, Danforth said. The improvements at the Forum and the role it plays as one of the premier concert experiences in LA bring value to the bargaining table for the right partner, he said.