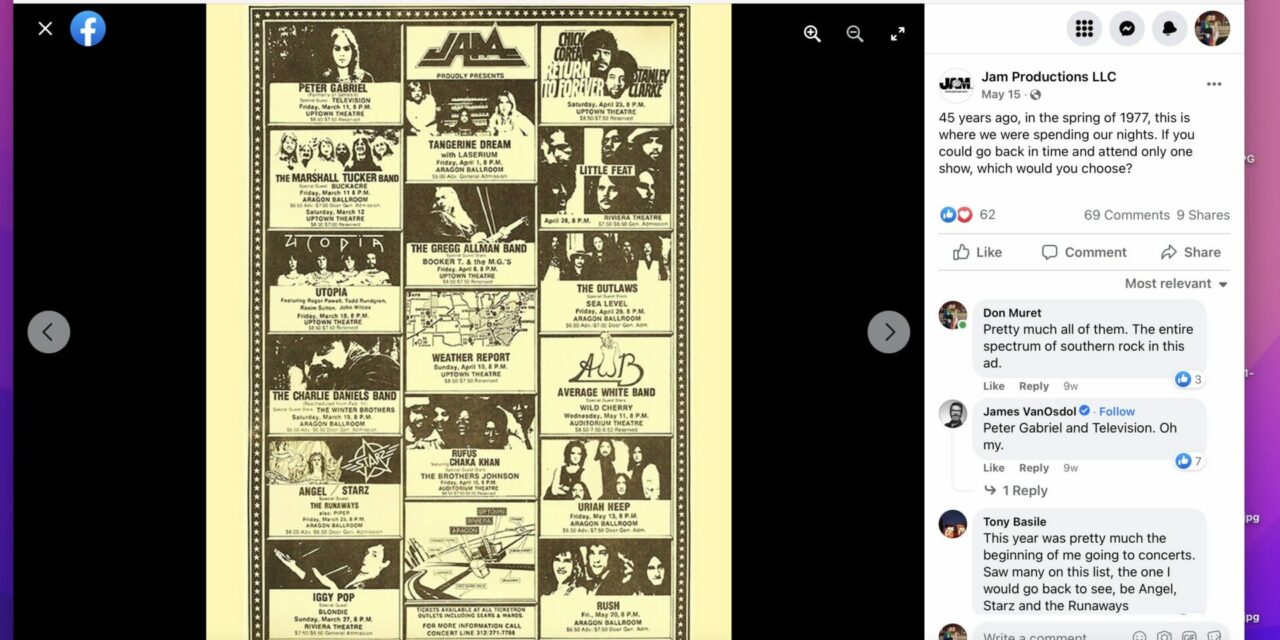 Remember when? Chicago concertgoers go back in time

John Soss, the company’s vice president of marketing and a Jam employee dating to the early 1980s, joined forces with co-workers John Bell and Diana Obracaj to coordinate a campaign to document the rich history behind the promoter.

It’s been a labor of love for Soss, who attended many of those shows. The social media effort and the strategy behind it all started during the pandemic and the lengthy shutdown of live entertainment.

“Initially, like all promoters, once the shutdown happened, we were putting all our energies into pulling shows down, contacting ticket holders, finding new dates for things that were going to move and making sure the media was aware of what was happening,” Soss said.

“We had our hands full at the onset and as some of us started to clear out and we were all at home, I realized that we didn’t have anything to promote,” he said. “We put our heads together and came up with a series of (themes) we could use as content to put on the Jam social pages as well as the Vic, Riviera and Park West (concert venues). We didn’t want people to think we weren’t here anymore.”

Soss and staff did their research, combing through company records to showcase the coolest touring shows to match the corresponding day in history. To engage their followers, Jam staff asked them to select the one show they would like to attend if they could go back in time. It struck a chord with those responding in the comments section. 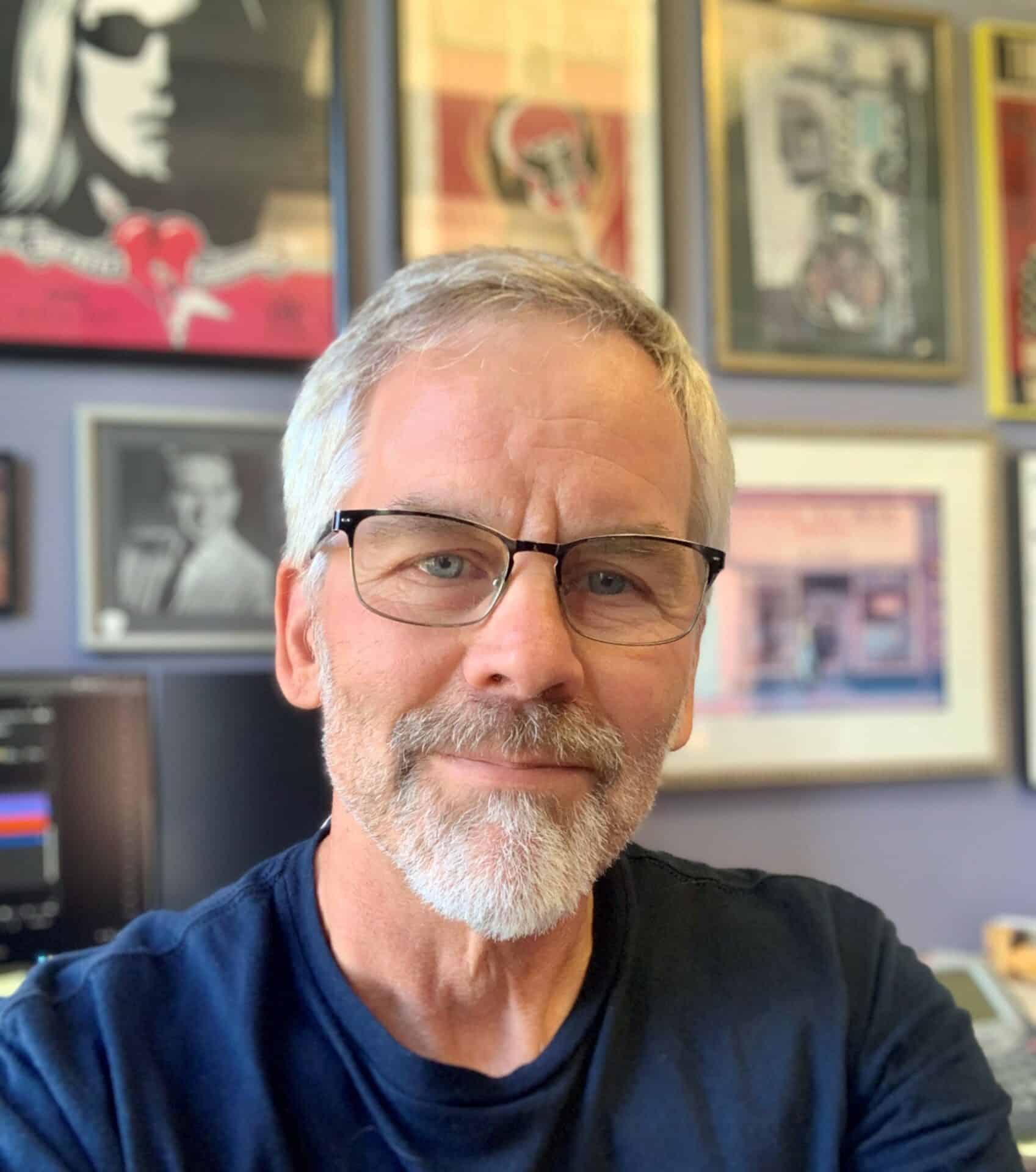 It’s no surprise. Over the past two years, as people suddenly had a lot of time on their hands, many took a pause to reflect back on the good times in their lives. Nostalgia permeated the pandemic. The sports memorabilia market, for example, exploded online after everyone was confined to their homes.

For Jam, concerts played a key role in that nostalgic feeling based on the reaction on social media. The promoter saw the posts resonate with live music fans, many of whom have a history of going to shows on their own. The messages kept the sense of the glory of a rock concert top of mind. Over the past several months, Soss discovered that people’s tastes are varied across the wide spectrum of music.

“Some would pick three to four shows out of that bunch that they like and the acts would have nothing in common,” Soss said. “We learned that people that go to shows just don’t go to see Americana groups. They don’t dislike punk and classic rock; they like lots of different things. It was kind of illuminating to interact with people in that way and find out what was on their minds.”

In addition, the Jam crew came up with a series called “With Special Guests,” which focused on opening acts, many of whom became headliners years later. They posted several tours that came through Chicago during a calendar year and asked followers to choose which support act they would have enjoyed seeing as a headliner back in the day.

“Everybody has had that experience of going to a show and seeing somebody who was the opener and being blown away,” Soss said. “We dug into that a little bit because it’s provocative. Sometimes, you walk away thinking you liked the opening act better than the headliner. That was something that really connected with people.”

Digging even deeper, the trio documented the first 10 concerts Jam promoted and posted stories about those shows. They leaned heavily on Jam co-founders Jerry Mickelson and Arny Granat, for their recollections and personal takes on those early ’70s shows, as well as their talent buyers, some of whom have spent decades with the company.

“That led to a lot of similar things,” Soss said. “The company did 37,000 shows at the time of the shutdown. There’s such a breadth of history, with incredible artists that became superstar level that played these 400-seaters in town, stories that even I didn’t know about until I dug into it.”

The spring of 1977 is just one example. A newspaper ad Jam officials posted on May 25 of this year represents an amazing time capsule peering into the heavy touring scene of yesteryear. It came at a time when a multitude of legacy artists, now branded as classic rock, ruled the airwaves and concert stages.

All told, Soss feels the social media campaign has brought Jam Productions closer to their customers during an unprecedented time in the live entertainment industry, including aging baby boomers that essentially grew up with the promoter. It comes through in their company tagline. After all these years, it remains “Brought to you by your friends at Jam.”

“These are people that still like to go to shows; I can tell by the comments that some of these folks have been around for awhile,” he said. “It’s still part of their lifestyle. They still get that charge from going to see a band with a roomful of people that share something with them. It’s the past connecting with the present in that way.”