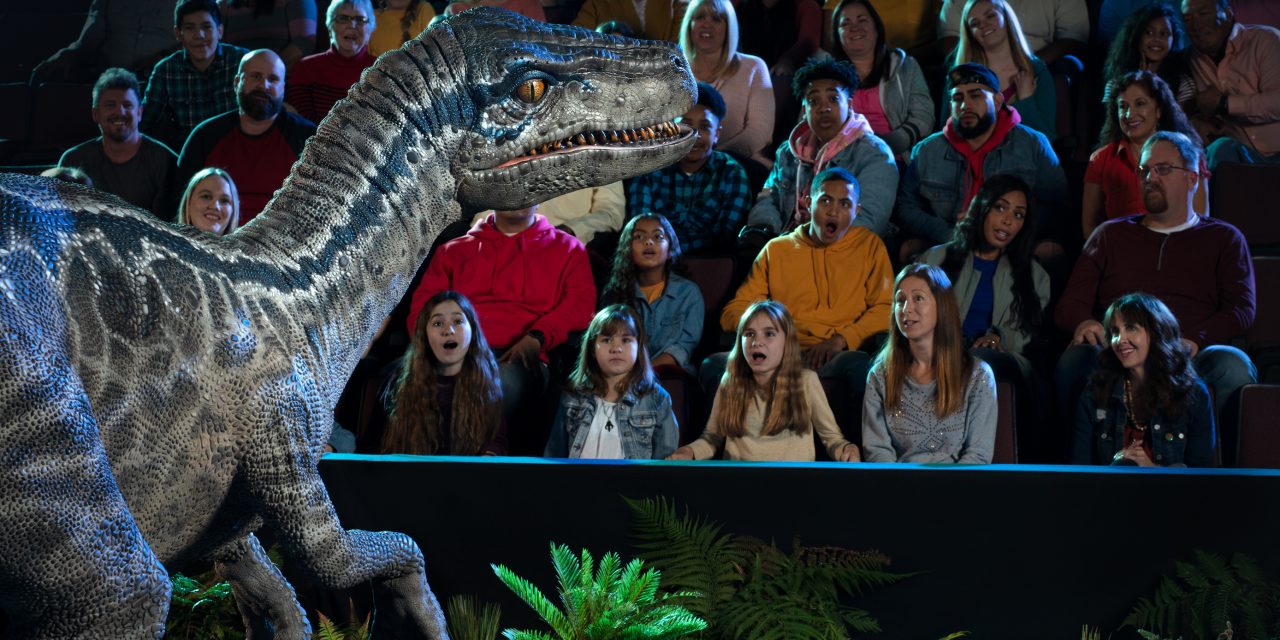 The authenticity and accuracy of the dinosaurs are the key to Feld’s live stage show. (Courtesy Feld Entertainment)

The soft opening of the show takes place at Schottenstein Center in Columbus, Ohio, soon to be followed by a splashy world premiere at Allstate Arena near Chicago the first weekend in November. Sixty-nine stops are planned in total and will include major markets such as New York City, Boston, Los Angeles, Dallas and Miami.

Through a combination of projection and on-stage scenery, the show takes the fans on a journey into the dense jungles of the fictional Isla Nublar, where scientists work to stop an evil plot to harm the dinosaurs.

There are recognizable elements from the franchise, including the beloved Velociraptor, Blue, and the menacing Tyrannosaurus rex, which measures more than 40 feet in length on stage, as well as new characters and creatures, that iconic score, a gyrosphere (the clear balls that Jurassic World tourists ride in while observing dinosaurs in the movies), an Asset Containment Unit, a tricked-out Jurassic World jeep, a couple of motorcycles and a flying Pteranodon.

“Feld’s mission was to be accurate to the films and create life-sized dinosaurs that looked and felt real,” said Chris Nobels, associate producer for Jurassic World Live. “Everything that is on stage has been a collaboration between Feld and our partners to make sure that every detail is accurate.”

Being a Feld show, the on-stage gore is held to a minimum, so expect the audiences to comprise a lot of kids and families. 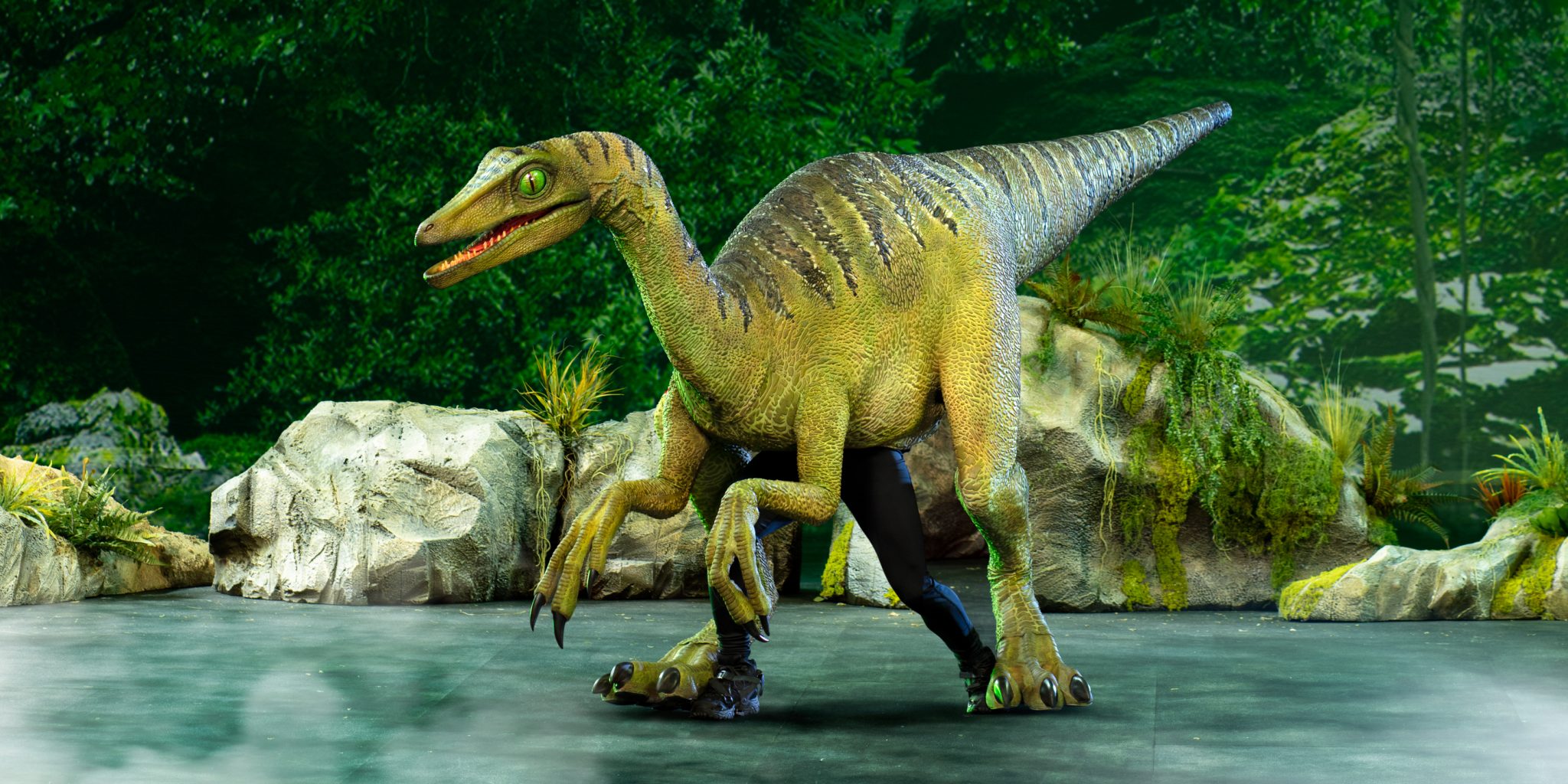 “It’s going to be similar in style, suspense, terror and awe to a Jurassic World movie,” Nobels said. “If parents feel comfortable with their kids watching the movies, then they will feel comfortable with our show. A lot of the action is implied, and we won’t be physically killing anyone on stage.”

Staying true to the films, the story will feature dinosaur and human interaction, dinosaur vs. dinosaur battles and, of course, a blowout grand finale with dinosaurs fighting people and other dinosaurs. “It’s very much what people would be used to from the films,” he said.

“We created an original story and presented it to the NBCUniversal team and eventually to Steven Spielberg and producer Frank Marshall,” Nobels recalled. “All of them loved the idea and the story.

“It’s an original story. We’re not trying to retell the movies. We are going to bring to the fans a different aspect of what is going on at the Jurassic World park.”

The production will also introduce some new characters: a new dinosaur — a Troodon named Jeanie — and two new scientists.

The scientists “are working on what’s going on inside the dinosaurs’ heads, much like Owen Grady (played by Chris Pratt in the Jurassic World movies) was working on the training and behavior of the dinosaurs,” he said. 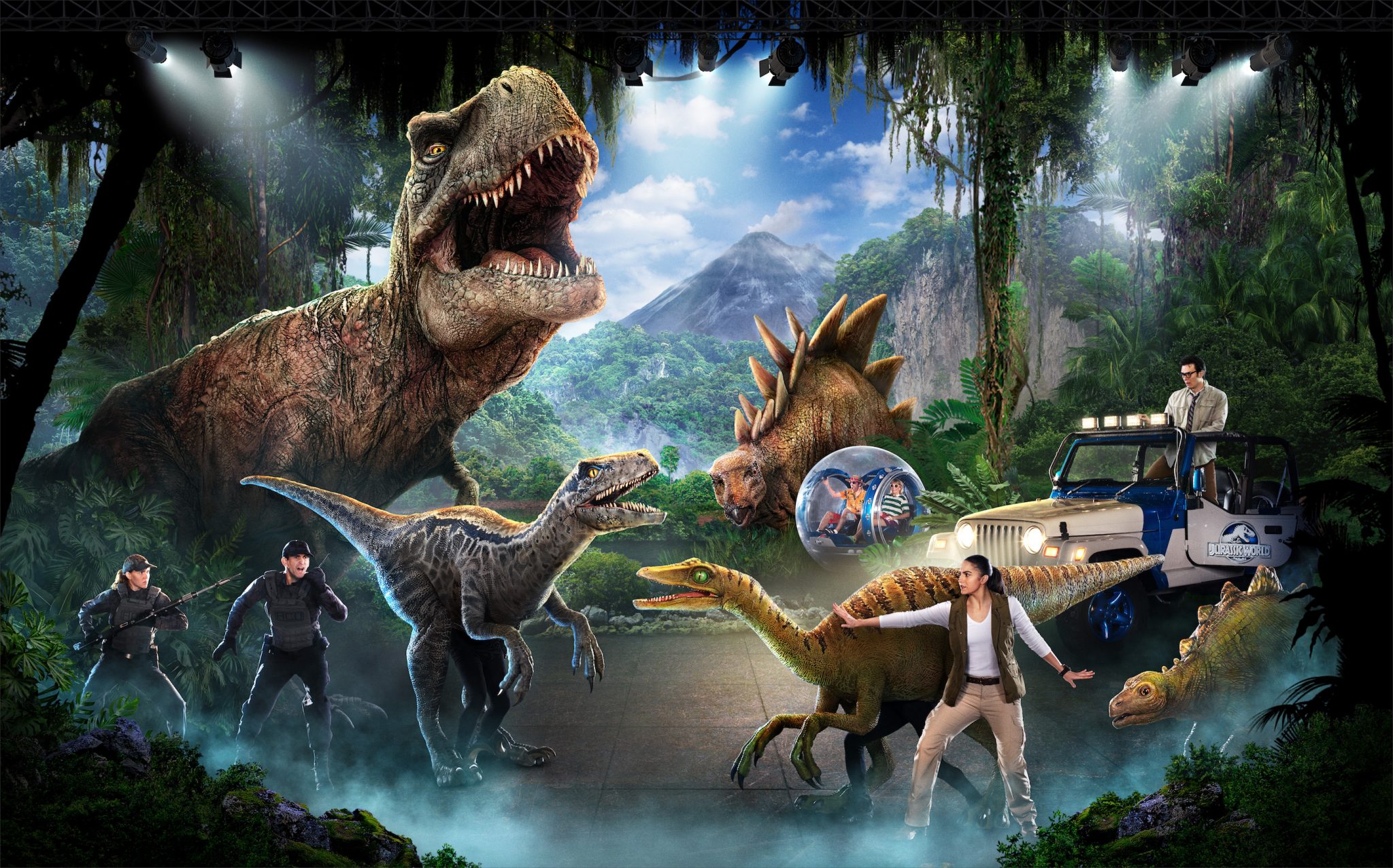 The show was created by the directing team of Dan Shipton and Rob Nicholson and the writers are Steve Jarczak and Shawn Thomas.

It took two solid years for the Feld team to refine the story, create the video content, make the dinosaurs and work with the NBCUniversal music team.

“We wanted to take our time and create an experience that adds to the Jurassic World franchise in a substantial way,” Nobels said. “And if the dinosaurs don’t look real — it’s over.”

Twenty-four dinosaurs in all will roam the stage, under various forms of power. Three of the production’s seven species — the Troodon; the Velociraptors, which include Blue; and the baby Stegosaurus — have a person inside operating the dinosaur.

Larger dinosaurs are a combination of animatronics and people power, like the Tyrannosaurus rex, and a handful are completely animatronic, driven by off-stage technicians. Those include the adult Stegosaurus, the Triceratops, and Indominus rex, an antagonist in the Jurassic World movies.

There is also an array of drones outfitted to look like prehistoric creatures like Pteranodons, that are operated from off-stage. “We can get a lot of free movement from the drones,” Nobels said.

An animatronic giant Pteranodon, which flies on an automation system, swoops down, picks people up and flies away with them. It has a 5-foot wing span. “We’ll be able to swoop, and dive, and get lifelike movements from the Pteranodons, without cables.”

Nobels also thinks the T. rex will impress. “It’s 43 feet long and 15 feet wide in the shoulders,” he said. “We’ve gotten the 3D (computer-generated imaging) molds from NBC and we’ve created her to be authentic to the movies down to her scales and down to her wounds from her battle with the Indominus rex. We’re as accurate as possible in our environment.”

“There will be the iconic John Williams and Michael Giacchino music from the movies and original music from Tim Williams,” said Nobels. The music will be prerecorded.

The people inside the dinosaurs are known as “dinoteers,” but many of those slots remain to be filled because the job requires a specialized type of performer.

“It’s a very diverse group of people and what ties them together is their athletic ability,” Nobels said. “They have to be athletic to bring the characters to life and move with agility. It’s not backflips we’re after. To move raptor-like takes a very special skill set.”

Feld did not want to merely stage the plots of the movies, and NBCUniversal and the filmmakers were in agreement on that.

“We’re introducing something into the production that is unique in the Jurassic World universe and stands by itself,” Chief Operating Officer Juliette Feld Grossman said. “Most of the people will have a high degree of familiarity with the characters and dinosaurs from the movies, and we did not want to re-create the movies. We have a new story that no one has ever seen.”

“The story fits right into the Jurassic World franchise and creates an authentic experience that fans of the franchise want and expect,” Feld Grossman said. “What we’re excited about is that this show takes place in a different area of the park and there will be new characters and dinosaurs that the audiences have not met before, like Jeanie, the Troodon.” 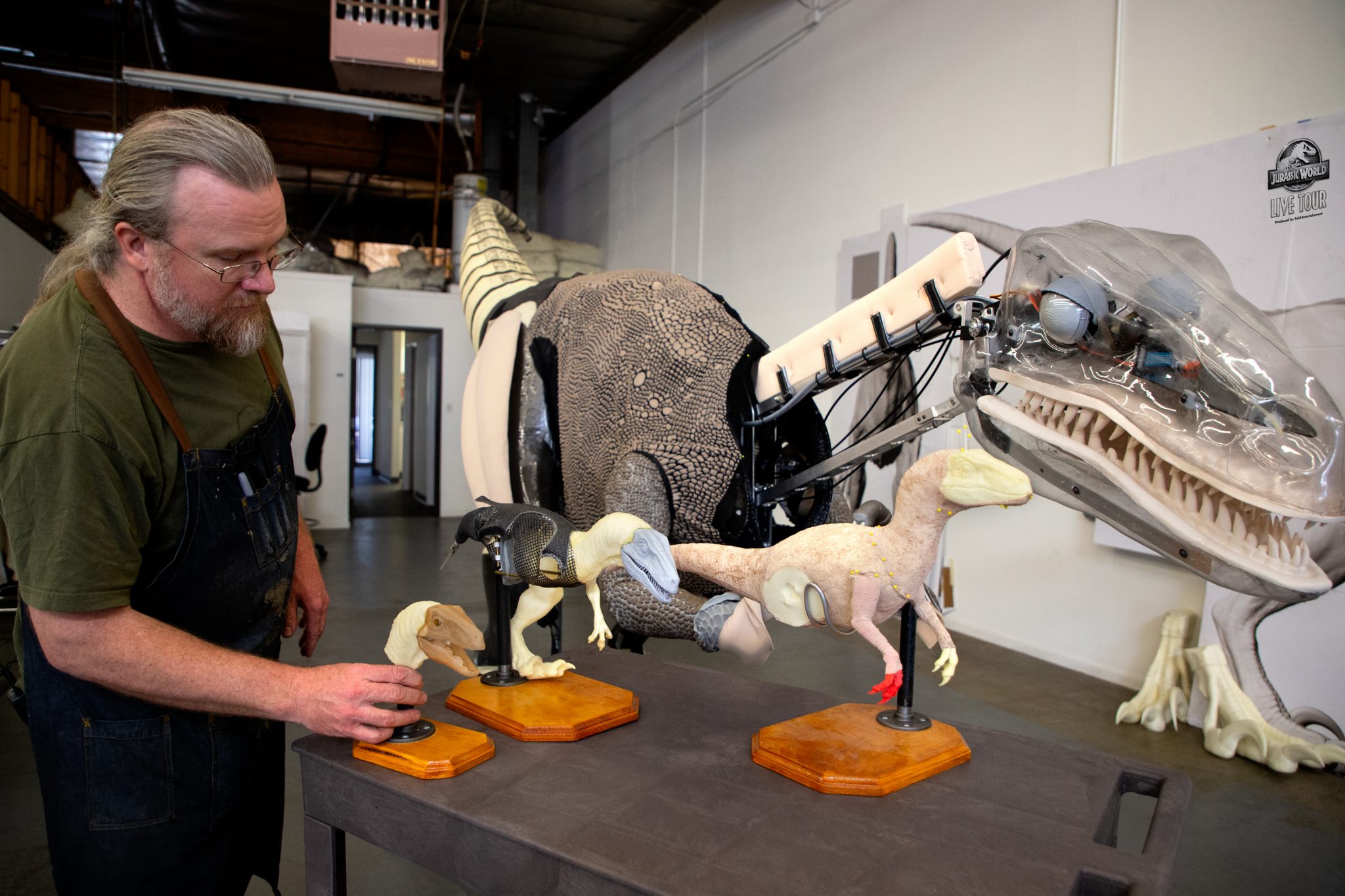 The show will also feature some of the most adored dinosaurs in the franchise like Blue, she said.

Feld Grossman said that the company’s success was founded in working with best-in-class entertainment companies like Disney, Sesame Street, Marvel and now NBCUniversal.

“We’re really proud of those relationships,” she said. “With all our partners, we do everything we can to immerse ourselves in the franchise, the characters and the stories. Feld creates the concepts and the storylines for all our productions, and we authenticate with our partners. Our shows deliver to the fans because they are true to what those franchises are all about.”

It will take more than 20 trucks to move the show. The cast and crew will travel by a combination of air and auto.

Load-in will take two days and load-out only five hours. The crew will be 25-plus and a show staff of five will travel with the production. Stagehands will be hired in each market.

Ticket prices will fluctuate. At Barclays Center, tickets will range from $15 to $225 based on the Barclay’s website.

VIP seating, at the top of the price range, is being offered in the form of “Environmental Seating,” which is 24 seats on each side of the stage, placed inside the dasher wall. “They will be right in the action on the floor mere feet from the dinosaurs themselves,” Nobels said.

Nobels was not worried about demand for the 48 VIP seats exceeding supply: “Because of the fighting of the dinosaurs and their height and weight all the dinosaurs will feel really close and every seat in the house is a great seat,” he said.

Nobels wouldn’t reveal the cost of producing the show but said, “We spared no expense to bring the dinosaurs to life and the best possible show we can bring to the fans.”

Is the production faithful to the world that the movies created? Maybe you should ask the original director.

“Steven Spielberg has been involved in every aspect of the show,” Nobels said. “We took him through the development of the dinosaurs, and he’s planning to come down to rehearsals.” 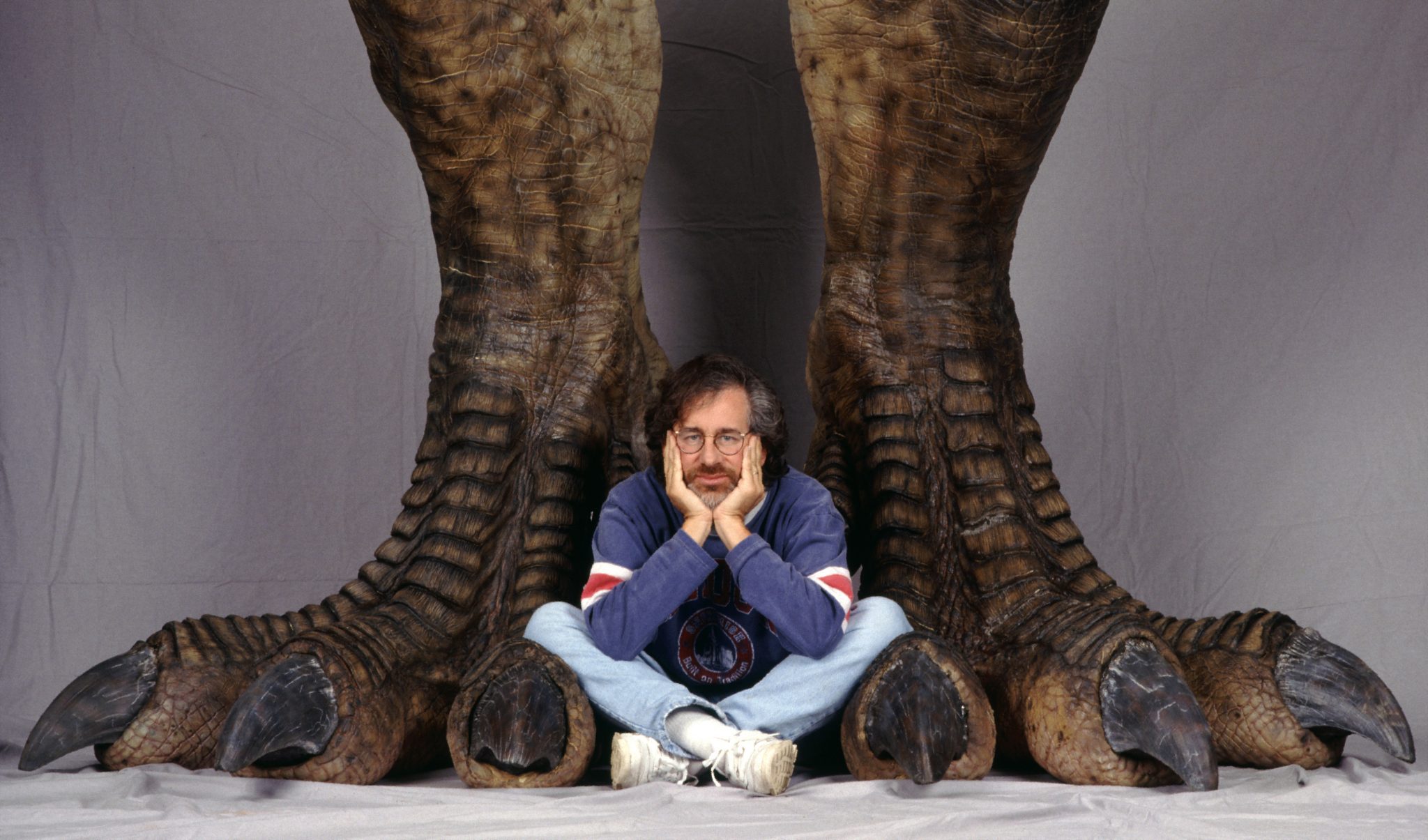 “Jurassic Park” director Steven Spielberg, shown around the time of the movie’s release in 1993, “has been involved in every aspect” of the new live show. (Getty Images)

Rehearsals will be held over eight weeks at Feld Studios in Florida before they pack everything up and head to Columbus.

“We’ll be in Columbus for two weeks of in-venue tweaking, to make sure the sightlines are good from the 300-level, the 200-level, right stage, down stage, everywhere an audience member could possibly sit.”

Schottenstein Center’s general manager, Mike Gatto, said the venue was thrilled to be selected as the first stop on the Jurassic World Live Tour. There will be seven performances at the venue stretched over three days.

“I attended a presentation. It looks really exciting and the dinosaurs look great,” Gatto said. “The fans are going to love it.”

“Every product Feld creates is an exciting product, and I am sure Jurassic World Live will be no exception,” he said. “Arenas are always looking for family entertainment and we always want a diverse calendar of events, and this will definitely add to that diversity.”

Jeff Meyer, senior vice president of event marketing for Feld, said Columbus was chosen because it’s a central location and the arena was accommodating.

“It’s a great facility that will allow us ample time for our first load-in as well as other opportunities to flesh out show operations,” Meyer said.

Some of the dates will take the place of dates that were previously held for the circus. “We have incorporated many of the historical circus dates into our other touring productions, including  Jurassic World Live,” he said.

Meyer indicated that the show would move to international markets after spring 2021.

Feld Grossman did not want to reveal whether further Jurassic World Live tours are on Feld Entertainment’s agenda after the first run of the show, but it’s a safe bet that if Jurassic World Live hits the numbers, the show won’t go extinct anytime soon.

Gatto sure hopes so: “We’re always hunting for great content, and Jurassic World Live ticks off every box,” he said. “We’re all hoping this becomes an annual event.”