Lessons from the Corner Office 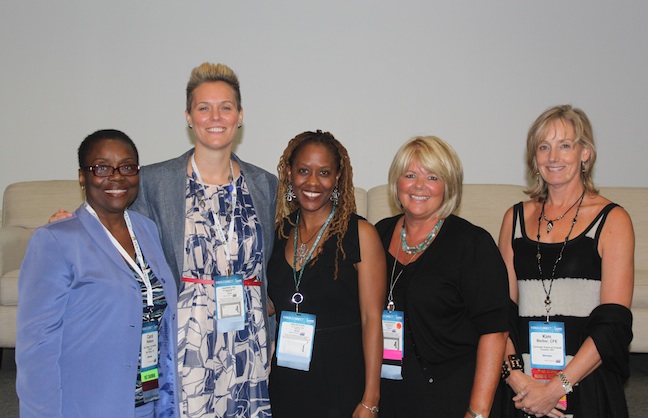 The panel for the Women in Leadership session featured Carol Wallace from the San Diego Convention Center, Elizabeth Wesley Cullen from Coliseo de Puerto Rico in San Juan, Adina Alford Erwin from The Fox Theatre in Atlanta, Cora Haltaufderheid from PMI Entertainment and Kim Bedier from the Comcast Arena in Everett, Wash.

Reporting From Fort Lauderdale, Fla. — Of all the stories Carol Wallace has collected over the decades working at the Dallas Convention Center and now managing the San Diego Convention Center, the story that stands out the most for her is the time she took a power nap — during a power breakfast.

It was back in Dallas and her boss, Jerry Barshop, had invited her to an early morning confab with a group of architects to discuss upcoming renovations. Being the only African-American in the meeting, and the only woman, Wallace said she felt the need to prove herself. But after working a long trade show the day before, and a concert that night, Wallace only proved one thing to the group — that she was tired.

“I fell asleep in the middle of the meeting” and was awakened by Barshop nudging her, she recalled, noting the episode was a case of “wanting something so bad that I pushed myself too far trying to get it.”

Her story was just one of dozens of candid moments from the Women in Leadership panel at this year’s International Association of Venue Managers. The two-and-half-hour program was complemented by an open and honest panel session with five accomplished female executives in the venue world. Instead of aggressively pursuing upward mobility, many cautioned against impatience and advised that when climbing the career ladder, the best pace is slow and steady. Here are some lessons from the panel.

“I’ve had some spectacular failures but I’ve always been able to turn them into opportunities,” said Kim Bedier, GM of the Comcast Arena in Everett, Wash. “I’ve even been fired but, as the quote goes, ‘It’s Mother Nature’s way of telling you that you were in the wrong job in the first place.’”

As many of the women on the panel shared, failing in business can be a normal and even healthy experience — as long as the stakes aren’t too high and one learns from their mistakes.

“And once you’ve learned from a mistake, really figure out how to build from it and help other people learn from it,” said Elizabeth Wesley Cullen from SMG/Coliseo de Puerto Rico, San Juan. “If you fail and you don’t build something afterwards, then all you have is rubble.”

“Sometimes you have to find the humor in a bad situation,” explained author Dr. Valerie Young, who led the panel. “I always tell people, if you’re going to laugh about it some day, why wait?”

Timing is Still Everything

“Failing to have a plan is planning to fail, and you have to have timing along with that plan,” said Adina Alford Erwin from The Fox Theatre in Atlanta. “Being too impatient at a particular job, perhaps thinking that you should be moved up or recognized, and then acting on that impatience is a leadership trap.”

It’s a common mistake many young people make, pushing for a promotion or title change when they’re just not ready to move up. Maybe it’s anxiety about the future, boredom on the job or a sense of entitlement, but asking too soon (or, on the flipside, waiting too long) can send the wrong message to the higher ups.

“There are pitfalls with timing, and that comes from knowing when to speak and when not to speak,” Alford Erwin said.

And always know your audience and who’s in the room before speaking freely.

“I was in a meeting once where they wanted my opinion, and when I gave them an honest answer, they were stunned” by her frankness, said Dr. Young.

“You’ve got to take the challenge and you’ve got to run with it,” explained Cora Haltaufderheid from PMI Entertainment. There was a time when she was promoted over a colleague who had been at her building far longer than she, and she said that many of the staff members were surprised when they learned of her new role.

“I even called my husband and said ‘can you believe they’re putting me in charge?” she recalled.

A mistake many people make when taking on new tasks is doubting their own abilities and thinking they’re not good enough to do the job. Dr. Young authored the book “Overcome the Imposter Syndrome” to help women (and men) beat “the needless self-doubt that keeps them from feeling as intelligent and competent as everyone else knows they are.”

The Imposter Syndrome manifests itself in different ways, explained Wallace. While some individuals are outward with their sense of inadequacy, others put up a protective shell they hope will fool others and even distract from their lack of self-confidence.

“It’s important to let your team see you as human, and not make them think you’re a super hero,” said Wallace. “It’s important that they understand that you, too, rely on support and feedback from others, so show them your human side, even as you struggle. And always be willing to admit when you make a mistake.”