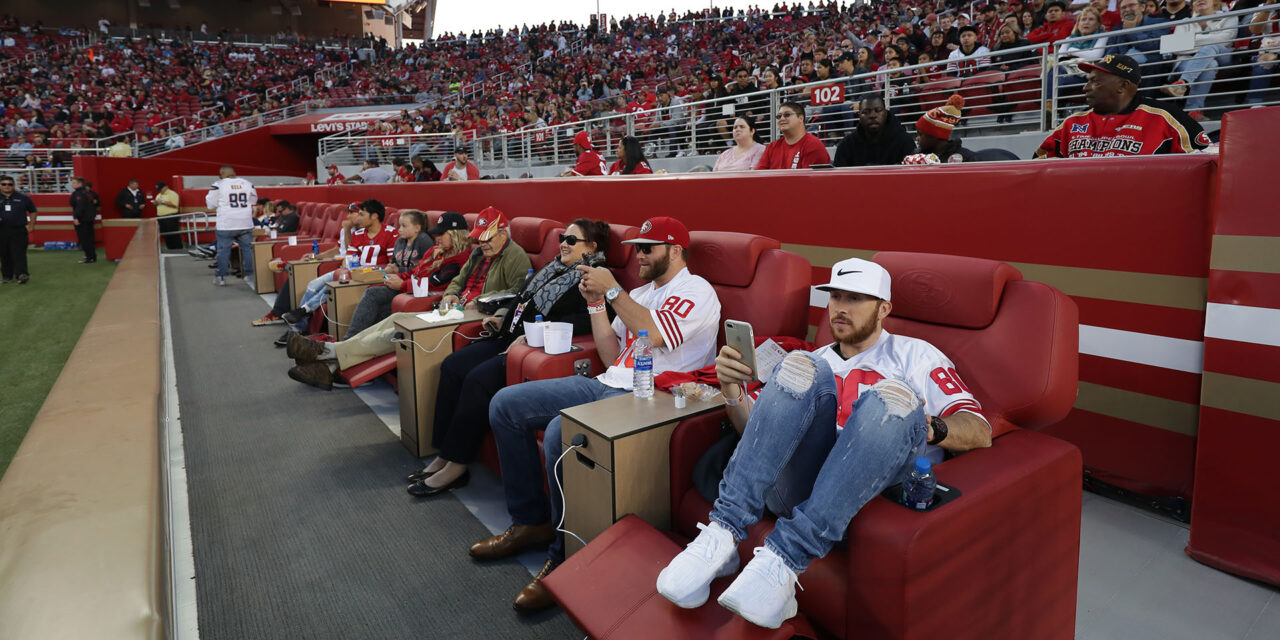 The new seats at Levi’s Stadium will mirror some installed in the south end zone for the 2019 season. (Courtesy team)

The field-level premium seat experience remains a hot market in the NFL, 20 seasons after the Seattle Seahawks introduced the concept with the Red Zone Suites at their stadium, now called Lumen Field.

For the 2021 season, Levi’s Stadium, home of the San Francisco 49ers, has added the Cache Creek Club. It’s branded for the northern California tribal gaming property that signed a five-plus year deal with the NFL team in 2019.

The new club, situated inside the northwest field tunnel, features a co-branded blackjack table inside the lounge (for entertainment purposes only). The club sits directly opposite the doors to the visiting team locker room.

The Cache Creek Club is part of a premium ticket package restricted to about 30 buyers.

Those patrons pay $1,500 a game for an oversized Niners red reclining chair at field level in the north end zone with plug-ins for cell phones and storage space. All-inclusive food and drink, covering beer, wine and top shelf hard liquor, in-seat-service, pregame field passes and preferred parking are part of the package. 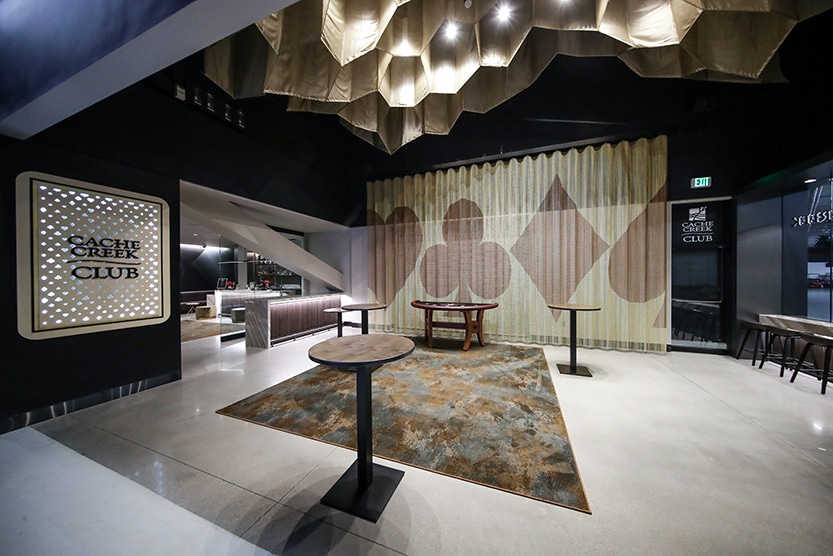 The Cache Creek Club is part of a premium ticket package restricted to about 30 buyers.  (Courtesy team)

The pathway from the club to their seats runs parallel to the opposing team entering the field.

The Cache Creek Club seats went on sale a few weeks ago and “sold out with a snap of the finger,” said Brent Schoeb, the 49ers’ chief revenue officer.

The full-scale recliners, produced by Figueras, a Barcelona, Spain supplier, are the biggest seats in the building. They’re temporary installations, and as a result, are not sold as a season ticket.

Buyers could purchase seats for multiple games or single games. Schoeb said the NFL must approve those seat locations before every season as part of the league guidelines for determining how close fans can get to the field of play.

The Cache Creek Club joins a similar field level club in the south end zone at Levi’s Stadium that opened in 2019.

The Green Room Club, a placeholder name until the 49ers find a new sponsor for the space, has the same red recliners as the newer club.

Those two end zone clubs join sideline clubs on the east and west sides that were part of the original design of Levi’s Stadium that opened in 2014. HNTB was the architect for the initial project.

Populous designed the two end zone clubs for the 49ers.

“It’s our highest demand in the building,” Schoeb said. “We opened the stadium with the BNY clubs behind the team benches on the 50-yard line. There’s been no turnover per se. The sell-through is strong every year.”

The retrofit falls in line with the trend over the past two decades for developing premium spaces at field level.

In many cases, whether it’s a bunker suite or a field-level club along the sideline, those customers have limited views to the field. Instead, they’re looking at the backs of players standing along the sidelines.

In other instances, there may be no views to the field from the interior lounges, such as the Cache Creek Club.

It doesn’t really matter. It’s all about gaining the best access to the players and a sense of exclusivity at field level that fuels the demand, said officials with NFL teams responsible for selling those products.

It all started in Seattle. The Red Zone Suites in the north end zone debuted in 2002, the year the Seahawks’ stadium opened.

Those suites, tucked under the stands a few yards from the field of play, were designed with interior hospitality space and a small patio. The old Ellerbe Becket, now part of AECOM, designed the Seahawks’ venue.

Since that time, the concept of field-level suites and clubs have expanded in scope and amenities across the NFL.

They’ve become a standard feature at new stadiums and a key upgrade at existing facilities for other NFL teams as they search for new ways to generate revenue.

The Carolina Panthers and New Orleans Saints have both introduced bunker suites for the coming season at Bank of America Stadium, which opened in 1996, and the Caesars Superdome, which continues to reinvent itself 46 years after it opened in 1975.

In Charlotte, North Carolina, The Gallery, a collection of 14 suites, are situated at field level in the west end zone, where the Panthers enter the field. The 12-person suites, supported by a central bar, small “front porch” and a communal “mixing zone,” sell for $300,000 a season.

They were completed last year during the pandemic and the Panthers entertained prospective buyers on game days during the 2020 season with restricted attendance at Bank of America Stadium.

In New Orleans, a dozen bunker suites in the north end zone are part of the $450 million Superdome renovation. The 24-seat suites, priced in the low six figures annually, are sold out with terms of three to 10 years, said Mike Stanfield, Saints senior vice president.

It’s been an equal mix of corporations and individuals buying the bunkers, Stanfield said. Season-ticket holder surveys dictated demand after Saints fans traveled to other NFL cities and saw what teams did with field-level seating.

“If you’re bringing in a client to sit down there, it’s a memory of a lifetime that you’re part of the action, unlike a suite that’s in the 300 and 400 levels of our building,” Stanfield said. “It’s a totally different interaction.”

Gensler designed both retrofits for the Panthers and Saints, and is working with a few other NFL teams on similar projects, said Ron Turner, principal and global director of the firm’s sports and entertainment practice.

“While it maybe isn’t the best view that you can have, fans love the idea of almost feeling like they can touch the players,” Turner said. “That’s what sort of made it all start in the first place. Everybody’s got their own version of it.”

The trend has sustained itself over the years, but it’s being tested as bunker suites come up for renewal, challenged by other premium products that may play to a bigger market, said Paul Griesemer, HNTB’s associate vice president and senior project manager.

In Las Vegas, the bunker suite concept came up early in the design process for Allegiant Stadium, which HNTB designed with Manica Architecture. Ultimately, the Las Vegas Raiders thought a premium club would sell better to the local resort community, Griesemer said.

The 10,700-square-foot space, an add-on for ticket holders with views to the field, officially opens this season after the Raiders played without fans in the stands last year at their new venue.

“It’s definitely Vegas; it’s glitz,” Griesemer. “It wouldn’t work in a lot of cities, but in Vegas, it’s a perfect match.”

In Santa Clara, the front entrance to the Cache Creek Club is all glass, looking directly at the entrance to the visitors locker room. The casino’s colors are black and gold, and the 49ers played up the gold hues to match their colors.

“It’s a very behind-the-scenes, high-end casino type of feel,” Schoeb said. “There’s an ROI piece between our partner and the field seat buyers. It gives us another event space to sell on non-game days as well.”

Levy, the concessionaire at Levi’s Stadium, will run the new club as it does all premium spaces at the facility.