Levy Digs In at Bank of America Stadium 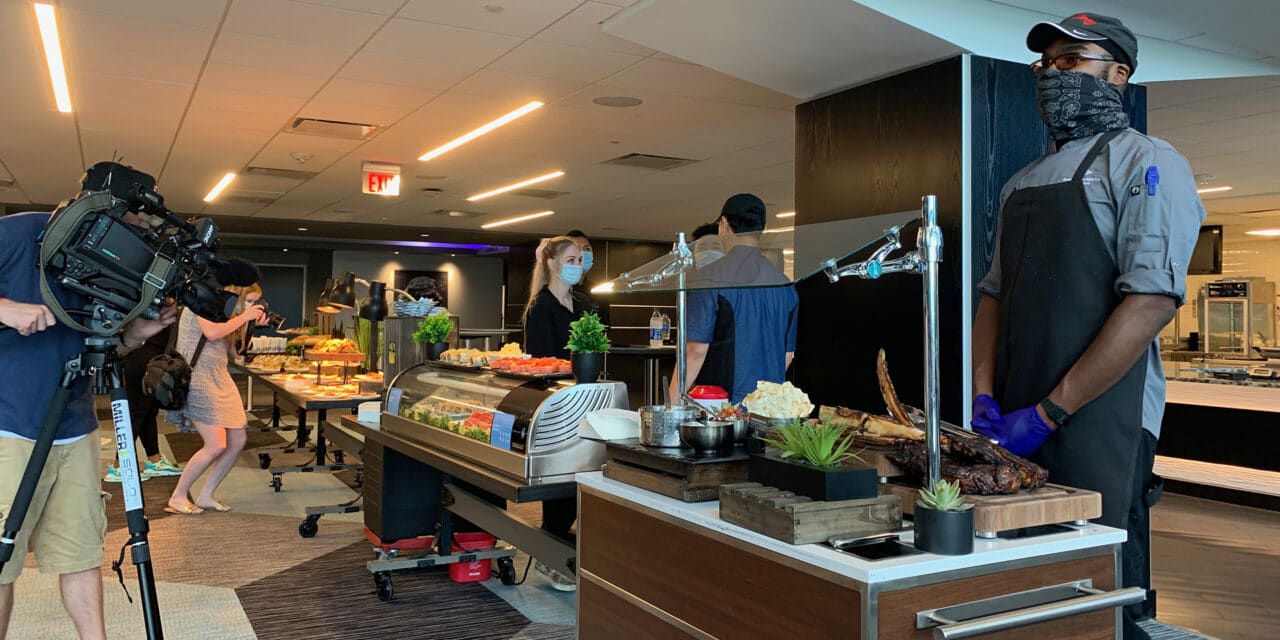 Levy showed off its menu at a media event at Bank of America Stadium. (Don Muret / Staff)

Levy, the Carolina Panthers’ concessionaire, has its feet firmly on the ground at Bank of America Stadium after taking over the NFL team’s food service last year during the pandemic.

After feeding crowds at a fraction of total capacity with a restricted operation in 2020, Levy has expanded menu selections and brought in Sabor Latin Street Grill, a local restaurant group with 17 locations in the Charlotte area.

Other parts of Levy’s food operation return to normal, considering the country remains in the grip of COVID-19.

Hawkers are back roaming the stands to sell beer and nonalcoholic beverages after a one-year hiatus, and Levy will resume buffet-style service in the suites to a certain extent after switching to prepackaged products in 2020.

Ultimately, the mode of distribution for food and drink in those premium spaces will depend on the suite holder’s preference, according to Carter Witt, Levy’s vice president of hospitality and strategy.

Witt moved to the Carolinas last year to take the reins at Bank of America Stadium. He’s been with Levy for 13 years and was previously in Washington, D.C., overseeing Nationals Park, Audi Field and FedEx Field.

In Charlotte, more nonprofit groups are expected to return this year after a one-year absence due to limited operations. In general, they’re eager to raise funds again after missing that opportunity in 2020, Witt said.

Fans can order items through their mobile devices for express pickup at all fixed concession stands.

In addition, QR codes will be displayed around the concourses, allowing patrons to scan those codes to order food and drink, Witt said.

Last season, mobile ordering was limited to pickup at select concession stands and for preorder packages. 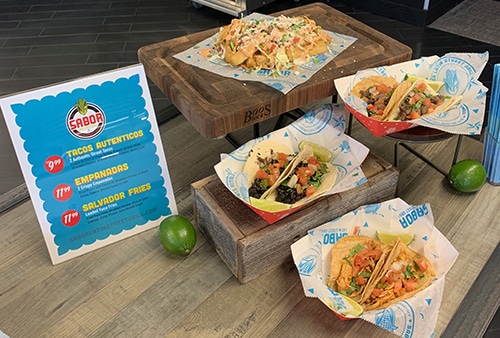 Sabor Latin Street Grill signed a two-year deal with Levy to sell tacos ($10) and empanadas and Salvador fries (both $12) at two stands on the 100 level concourse.

Levy was familiar with Sabor after the company ran a stand at Truist Field, home of  minor league baseball’s Charlotte Knights, in 2019. Professional Sports Catering, Levy’s sister firm, runs the food at the Triple-A ballpark.

“They’re trying to get more local vendors into the stadium, and once the conversations got going, one thing led to another and things fell into place,” said Joel Tracey, Sabor Latin Street Grill’s chief marketing officer. “We are 100% behind the scenes, prepping all fresh food for every game and running the concessions ourselves.”

In that respect, the dozen people working Sabor stands for Panthers games, most of them full-time employees, provide some relief for Levy during a labor shortage that has hampered the food service sector in general. So do the many nonprofits working concession stands at Bank of America Stadium.

On its own, Levy offers incentives for its game day workers, but Witt would not say whether the vendor is offering cash bonuses to part-time employees as many traditional restaurants are doing to attract labor.

“It’s tough,” Tracey said. “The entire industry is going through a crisis, but we’re doing everything we can to get good workers and offer them compensation and a good place to work. We’re pulling resources from around the company to work as cashiers and back of house.”

Concessionaires signing deals with local restaurants to sell their products in-venue has been a trend over the past 15 years. In some cases, similar to Sabor Latin Street Grill, the subcontractors work the stands themselves.

Food consultants say the labor shortage puts additional pressure on the need for subcontractors that can provide workers and sell products.

At the same time, bringing in local brands splits the pie even further among the concessionaire, the team and the subcontractor, which results in less revenue for all three parties.

Surprisingly, many teams do not fully understand that concept, said Mike Plutino, founder and CEO of Food Service Matters.

In that situation, the subcontractor typically takes between 50% and 60% of sales to pay for staff, product and expenses, leaving 40% to 50% to be split between the concessionaire and the team, Plutino said.

“The financial impact of using more third-party subs to the team is significant,” Plutino said. “When you compare this to the typical commission rate for general concessions in football in the 45% to 50% range, the team is now getting about half of that in commissions.”

There’s no question it helps to have subcontractors supporting the concessionaire’s operation, and the ability to feature an iconic brand in the local market can override the profit-and-loss equation, said consultant Chris Bigelow.

“The (team) makes less money because you’re splitting the pot three, four and five different ways, but everybody is willing to take less money if they have some signature items that fans really want,” Bigelow said.