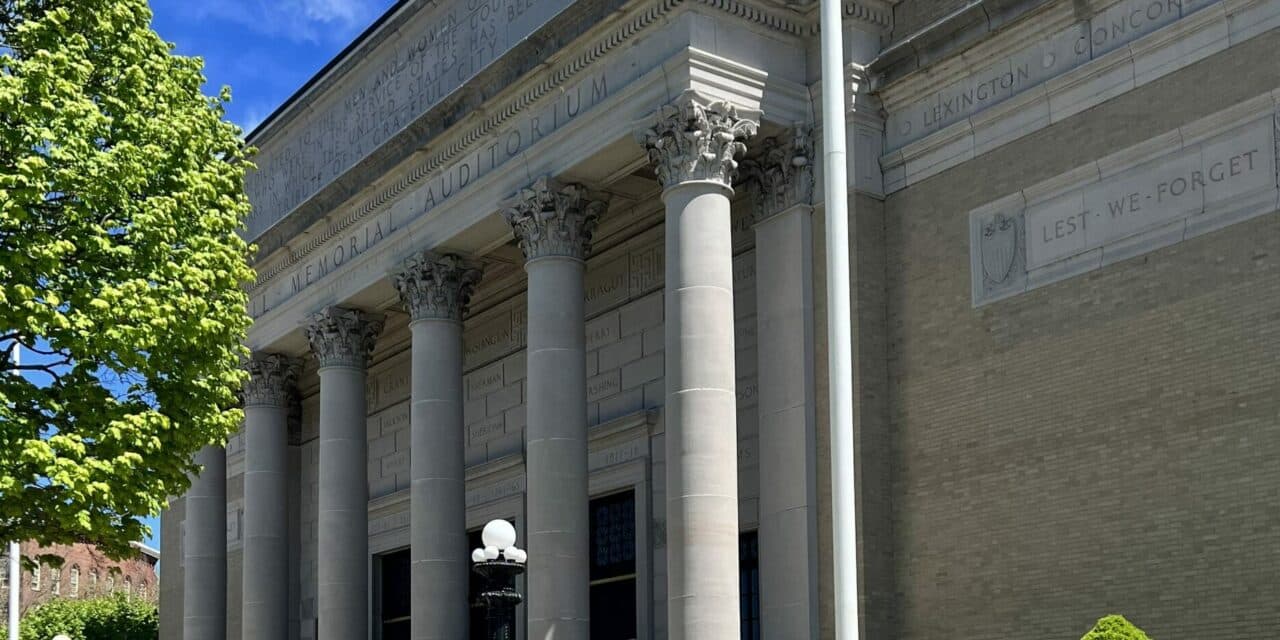 Celebration Kicks Off This Week

Lowell (Massachusetts) Memorial Auditorium, which kicks off a 100-day celebration of its centennial tonight with a John Fogerty concert, changed the local landscape in more ways than the skyline.

Constructed 100 years ago to honor World War I veterans, the facility stands today as a monument to all veterans of all wars and the catalyst for Merrimack Valley’s cultural community resurgence.

The venue is owned by the city of Lowell and managed since 2018 by Lowell Management Group, a division of Spectacle Live. When the building was dedicated on Sept. 21, 1922, Calvin Coolidge, former Massachusetts governor and at that time U.S. vice president, presided. The auditorium was built for $1 million and designed by Blackall, Clapp & Whittemore, which was also responsible for designing Boston’s Colonial, Wilbur and Metropolitan (now the Wang) theaters.

When construction began in 1920, WWI had recently ended and the country was still recovering from the influenza pandemic of 1918. Lowell had been at the center of the American Industrial Revolution as the first large-scale factory town in the U.S. But jobs in the textile industry were moving south and the community was hit hard in 1929 by the Depression. 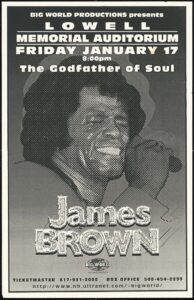 SOUL OF THE CITY: James Brown is featured on a bill advertising a show at Lowell Memorial Auditorium, which he played in 1997. (Smithsonian National Museum of African American History and Culture/Courtesy venue)

Over time, the auditorium became a source of hope for the community, which despite stretched coffers, invested $8 million to refurbish the storied hall, which played host to Tommy Dorsey, Benny Goodman and Frank Sinatra. The idea was to use the auditorium as the cornerstone for an arts rebirth to attract tourism.

“The city found itself on some difficult times at the middle of the 20th c century,” said Peter Lally, president of the Lowell Management Group. “Coming into the renovation, the decision was made to make Lowell a destination city and the renovation was a big piece of the revitalization of downtown. It has brought life, and arts and culture to the city.”

The 40-year restoration project began in the early 1980s and included HVAC, electrical upgrades and adding a proscenium so the auditorium could book Broadway shows.

According to Lally, the renovation was also the catalyst in later years for the city to build the 6,000-seat Tsongas Center arena and the 5,000-seat Edward A. LeLacheur ballpark, home to the UMass Lowell River Park Hawks baseball team. 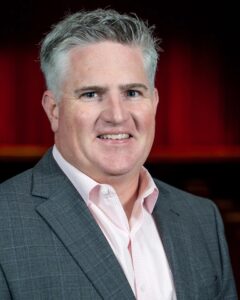 “It was the start of so many things that went into the city remaking itself after being so focused on industrial manufacturing,” Lally said. “And now 100 years later, Lowell has been rewritten as a destination and the auditorium is somewhat responsible in being the first step in that direction.”

The 100,000-square foot auditorium doesn’t have fixed seating, which makes it possible to accommodate audiences from 1,800 to 3,000 or seat 500 at round tables for dinner on the floor.

“One of the beautiful things about the Lowell Auditorium is that we can set up in any number of ways and that gives us a lot of flexibility,” Lally said. “One night we could be doing boxing and the next night a Broadway show, the next night a nonprofit charity dinner.”

That tractability includes setting up in the round for sporting events including amateur Golden Gloves boxing series, which is where Rocky Marciano began his legendary career. The boxing series has been a staple at the auditorium for 75 years and will return as part of the centennial celebration in early 2023.

Upcoming programming for the centennial season includes Broadway shows, comedy, music and family entertainment. It starts with rock legend Fogerty, followed by comedians Jay Leno and Lewis Black, the Lowell Irish Festival, Disney Junior Live on Tour and a return of the Broadway series with Chicago and the Gloria Estefan musical On Your Feet! 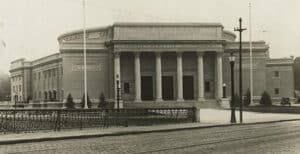 “The Broadway series hadn’t been there for a couple of years, even before COVID,” Lally explained. “That was one of our goals when we started in 2018 was to relaunch the Broadway series to mark the 100th anniversary.”

“For a century, this remarkable landmark has honored Lowell’s sons and daughters who fought for our nation,” said Lowell Mayor Sokhary Chau in a statement. “Over those 100 years the Auditorium has also been the gathering place for our community and our neighbors throughout the Merrimack Valley. And today, it serves as the nucleus of a vibrant downtown and host to many non-profit events, including the Boys and Girls Club of Greater Lowell and the Middlesex Community College Foundation’s Celebrity Forum event.”