Marking One Year of ‘History’ 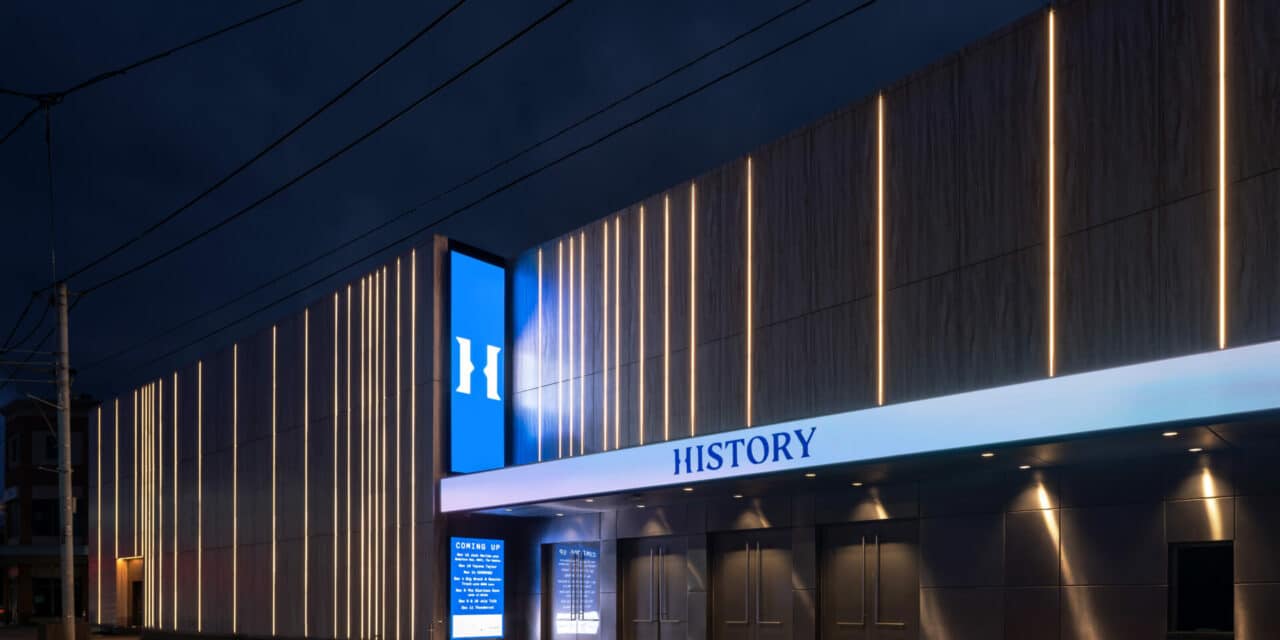 Venue serves as an underplay for arena acts

The 2,553-capacity History, the Live Nation-Drake venue collaboration in Toronto, has marked its one-year anniversary after seeing more than 300,000 music fans come through its doors since opening in November 2021.

The venue has also served as an underplay for arena acts, including Muse, Paramore and Nickelback, who all put on special shows to showcase new albums.

The 35,000-square-foot complex was created by DesignAgency, in consultation with Live Nation Canada and Drake. The architect was IBI Group, with sound design by PRG and lead engineer Jon Halliwell. Swallow/Thornton Tomasetti was the acoustic consultant.

The facility has a 22-foot x 40-foot stage with a permanent LED wall facing a two-level room.

The lower level accommodates 2,200 people and the curved mezzanine fits 350, which includes 55 front-row theater-style seats. There are 10 premium boxes, plus two ground floor VIP areas, including the north VIP box, stage left with its own bar and entrance. The south platform on the mezzanine is reserved for the artist’s guest list and promoters.

Other features include a stairwell to get from the green room to the stage with customizable lights; another stairwell leading to the tour bus area and modern dressing rooms and lounges.

VenuesNow spoke to general manager Steven Biasutti about the first year of operation. 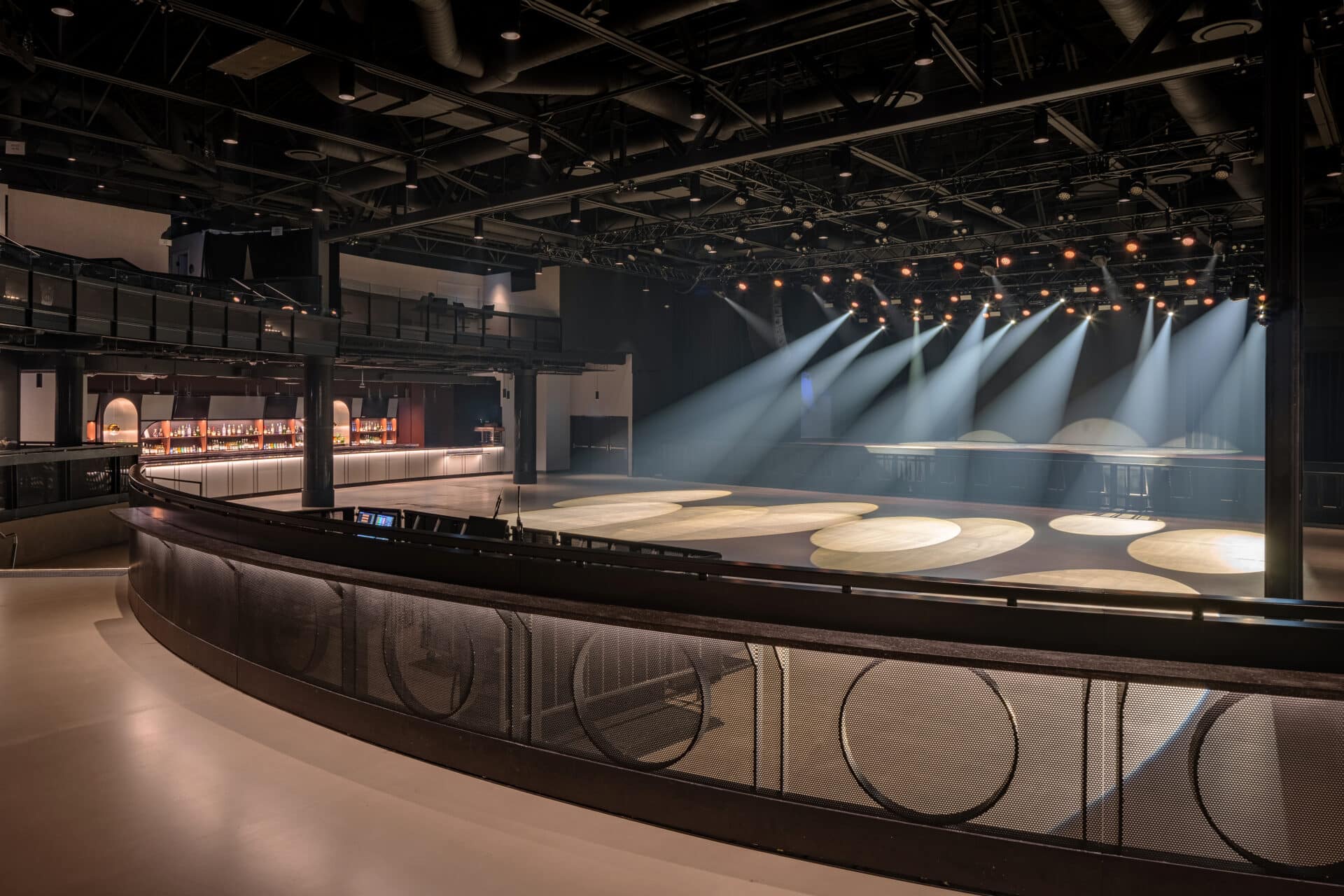 What’s your reflection on the first year?

Steven Biasutti: We were impressed with the performance over the first year, blowing away expectations. We had a full calendar, considering COVID shut us down for the first two months of 2022, relaunching on March 6. From there, we had 27 shows in the month of October, which was a massive undertaking for the whole management team and staff (60 hourly employees).

We had a few special events of note as well, (including) the launch (Drake’s) OVO Fest, the All Canadian Northstars, with Drake, Maestro Fresh Wes, Kardinal Offishall and Nelly Furtado, all on our stage at the same time. Drake wanted to honor all of his influences growing up in the city.

Outside of shows, we have had a few music video shoots and other special events. The biggest one was definitely the first-ever Legacy Awards, celebrating Black Canadian talent (in music, sport and film). That transformed the room into a completely different setting to go live on CBC.

What is Drake’s involvement? He doesn’t own it, although some people call it “Drake’s club.”

He’s a partner. Drake has showed up to certain events as a fan, and doesn’t take the limelight. He loves seeing the acts that he knows and coming in to greet friends and hosting them when he can.

So it’s not like with the Toronto Raptors partnership with him, where you want him to be more front and center, promoting it and being the face?

The All Canadian Northstars show was a wonderful night, celebrating rap and R&B artists from 20 years ago. It was sold out, but with fewer people than the sold-out Nickelback show Nov. 15. Is “sellout” not always full capacity?

For the OVO Fest, it was by design. It was a specific show. The clientele was people who recognized everyone who was on stage and it was a launch to OVO, so it was a particular crowd that was targeted. Nickelback sold out because they haven’t hit the stage in a while, and with a launch of a new album.

What feedback have you received from concertgoers?
From day one we focused on the guest experience. I think that that lends to our success as well, with reviews online and reaction to the venue and how they’re treated as a fan. Our management team has always focused on the guest experience and how their journey from walking in the front door through the security check to the final encore to how they feel when they leave the venue.

The interior was designed from scratch. Has there been anything that you didn’t anticipate technically?

There’s always improvements to lights and sound that we can work on, but, as of now, the way the room was designed lends itself to the quality of shows that we have on stage. There really aren’t any massive changes that we’re making from the original design. We did put a smoking area for people to step outside for some fresh air or vaping. A lot of live music venues don’t allow in and out.

History is becoming a showcase venue for special shows to celebrate a new album.

Absolutely. We’re always the first choice, being the new kid on the block, and with the reviews that we’ve had, we are sought out for the big underplays. I would say that Muse, Paramore and Nickelback showcased that aspect. Anyone that was at those shows can see that an arena act impresses inside the 2,500-person History.

Because you have the built-in LED wall, if it’s a touring artist with their own backdrop, can that technology be used inside History?

Yes. Our technical director, Dave Gardner, employs a monitor engineer, front-of-house engineer, an audio engineer and a lighting engineer. If a big arena act wanted to use our LED wall for more than a band name drop, we would then contract out a video tech. Basically, the tour would bring in the software and our video tech would show their video tech how our system works. Our techs are there to see that our audio and video system are used properly.