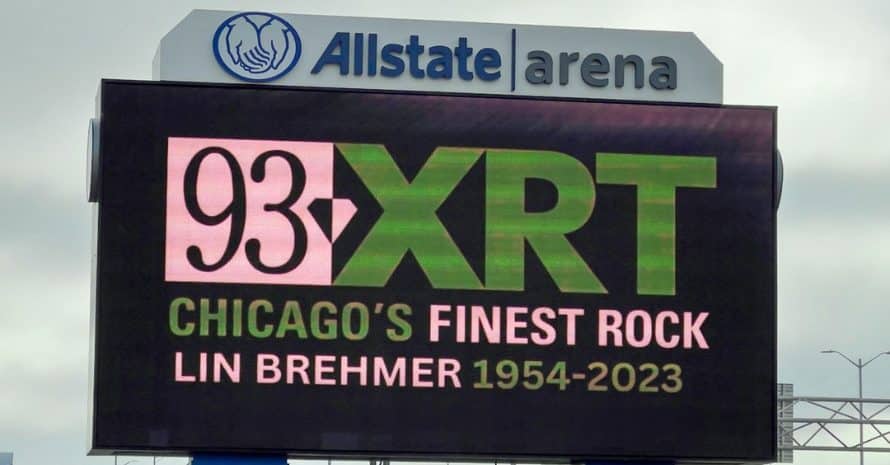 I didn’t get a whole lot of work done Monday. Instead, I was consumed by the tribute to Lin Brehmer, the beloved Chicago broadcast personality on WXRT-FM radio, where he spent 30 years as a disc jockey.

Brehmer, 68, died Sunday of prostate cancer. On the radio (and through the Audacy mobile app), his colleagues shared heartfelt stories of their friend and work partner, spinning many of his favorite tunes over the course of the day.

Before moving to Charlotte in 2003, I spent 13 years in Chicago, mostly covering live entertainment for the old Amusement Business magazine, a stretch coinciding with Brehmer’s debut as ‘XRT’s morning drive guy in 1991. He developed a huge following and a loyal fan base in Chicago, including myself.

It seems weird to get emotional over a person you never really met, despite the dozens of concerts in Chicago we undoubtedly both attended in the 1990s and early 2000s. In that respect, I’m not alone, based on the feedback across social media outlets from dozens of mourners. 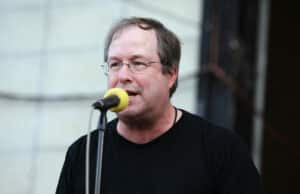 Fans marveled at his stamina. Brehmer was a human dynamo. WXRT is a station that dates to the early 1970s, with no particular music format, a rarity in terrestrial radio. The station sponsors a ton of concerts in Chicago, most in conjunction with Jam Productions. Countless times, Brehmer would go to a show at night before waking up in the wee hours to work his shift, an amazing feat.

He was also a diehard Chicago Cubs fan and wore his feelings on his sleeve, which I can relate to in spades.

For Brehmer, those bleary-eyed wakeup calls extended to a 20-year run celebrating the Cubs’ home opener every season with a live broadcast the morning of the game at Yak-Zies, a local bar down the street from Wrigley Field.

Those events became just as much a tradition as the seventh-inning stretch at the ballpark. The party typically started at 5 a.m. with beer flowing and live music, showcasing national acts such as Sonny Landreth, The Smithereens, Los Lobos, Bob Mould and Wilco, a homegrown band.

The tavern was always packed, providing ample opportunities to rub elbows with Brehmer, the master of ceremonies. He was the guy standing on the cramped stage with headphones in hand as part of producing the live remote, bobbing to the music. I was lucky to attend a few of those events, including in 2018, the year the Cubs’ home opener got snowed out, which meant the festivities raged on unabated at Yak-Zies.

Over the past 15 years, the world got a lot smaller with the advent of social media. I became one of Brehmer’s 34,000 Twitter followers, responding to his posts about the Cubs. Sometimes, he would answer back, which says a lot about the character of a big-time media personality in a major market.

As Cub fans, he knew how we all felt. Together, we would commiserate online about the hard-luck Cubs, at least until they won the World Series in 2016. 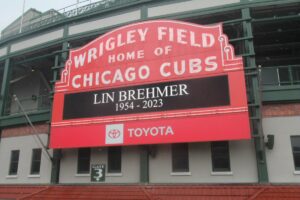 After his death, many recording artists paid tribute to Brehmer, such as Jeff Tweedy, Jason Isbell, Jon Langford and Steve Earle, who credited Brehmer for exposing his music in the 1980s as WXRT’s music director to a new audience beyond those that heard his songs on country radio.

Wrigley Field, Metro and Allstate Arena were among the Chicago venues posting tributes on their marquees. Pat Nagle, Allstate Arena’s executive director, tweeted, “RIP Lin Brehmer … a dear friend and Chicago radio icon. He was taken from us too soon, but he will not be forgotten.”

The Riviera Theatre paid tribute as well on their marquee, less than 36 hours after WXRT presented Big Head Todd and the Monsters with the Freddy Jones Band as the opener. I happened to be at the Riv on Saturday night with Scott MacLaughlin, my brother-in-law, primarily to see FJB’s reunion. The group got its start in Chicago and has toured nationally since the 1990s.

It would turn out to be the final WXRT concert before Brehmer died. He was a big supporter of all local musicians, including the Freddy Jones Band, as noted in a Facebook post.

“He was our Chicago rock n roll shaman,” wrote Marty Lloyd, lead singer and FJB’s lone original member. “To think how lucky we are to say that he played our music. All the fun times we shared backstage and the early mornings playing on the air … it’s just so hard to understand that those times have come to an end. You were like no other with your energy and charisma. Enjoy living among the shining stars. That is where you belong.”