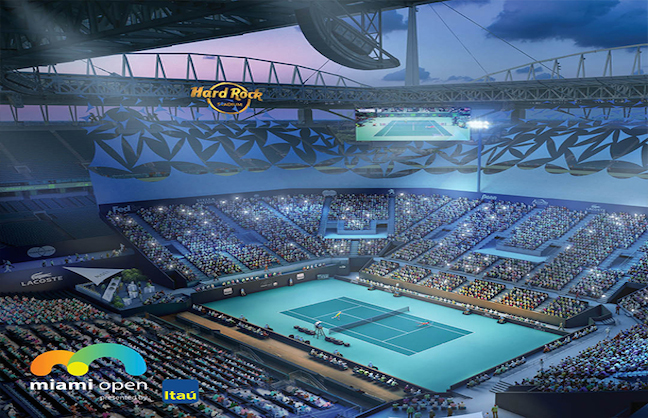 Hard Rock Stadium will host the Miami Open in 2019.

Hard Rock Stadium in Miami Gardens has more remaking in its future. And this time it's for tennis, not football.

After a more than $500-million renovation to turn the home of the National Football League’s Miami Dolphins into a modern venue in 2016, Miami Open owner IMG partnered with the Dolphins and stadium owner Stephen Ross to bring the tennis tournament to the stadium and turn the property into a permanent tennis venue.

Construction on 29 permanent show and practice courts begins in 2018, to be ready for the 2019 tournament.

“We are extremely excited that the Miami Open, a global entertainment event, will remain in our community,” Ross said in a statement. “We are committed to bringing a best-in-class experience alongside IMG to all of the players, fans and partners that will take part in this global affair. The opportunity to showcase the best tennis in the world in Hard Rock Stadium, a venue that brings together the best of culture, art and entertainment, will be an amazing experience for everyone involved.”

The 32-year-old event has long played at Crandon Park in Key Biscayne, but needed to find a new home after a 2015 court decision prevented upgrades to the Key Biscayne site.

Moving to Hard Rock Stadium allows the tournament, one of the largest events combining male and female tournaments run simultaneously, the flexibility to grow. The 2019 version of the Miami Open will have 30 show and practice courts, a “tennis oasis” with the largest video screen of any tennis tournament, a sponsorship village with expanded and upgraded entertainment spaces, permanent retail facilities, improved Wi-Fi, media facilities, locker rooms and fitness space for players and tennis staff and hospitality and activation areas.

The new Center Court—the one temporary court—will come as a 14,000-seat stadium within the 65,000-seat Hard Rock Stadium. Screens will cover unused stadium portions, and temporary seats will help create a more intimate spectator experience around the court.

IMG and Ross expect to spend up to $60 million for the full-time tennis center in the parking lots adjacent to the remade venue. Parking for the Miami Open will grow nearly exponentially. The 29 permanent courts is an increase from 21 at Crandon Park. Practice courts double and lighted courts increase from six to 20. Aside from the Center Court, the permanent space includes a 5,000-seat Grandstand court. Total seating for the tournament will jump from 25,062 to 32,474, including over 5,500 at practice courts.

“The Miami Open has been part of Miami’s culture for as long as I can remember and it’s a tournament that is very special to me and my family,” 23-time Grand Slam Champion Serena Williams, a member of the Dolphins ownership group, said in a statement. “I’ve enjoyed some of my best career moments in Miami thanks to the amazing tournament team and the supportive Miami fans. I am thrilled the Miami Open is staying in Miami, where it belongs.”

The Miami Open will finish its run at Crandon Park this year. The tournament runs March 19 through April 1.

“The Miami Open belongs in Miami,” WME and IMG Co-President Mark Shapiro said in a statement. “We’re grateful to have amazing partners in Stephen, the Miami Dolphins organization, Mayor [Carlos] Gimenez and above all the people of Miami who have been supporting the Miami Open for decades. While we’re looking forward to creating the new Miami Open experience at Hard Rock Stadium, our priority is to make the last edition of the Key Biscayne event the best it’s ever been.”

The Miami Open had options to move from Florida to sites as far away as South America and China. Landing 18 miles away may remove the intrigue of a waterside tournament, but it does preserve the Miami heritage of the event.