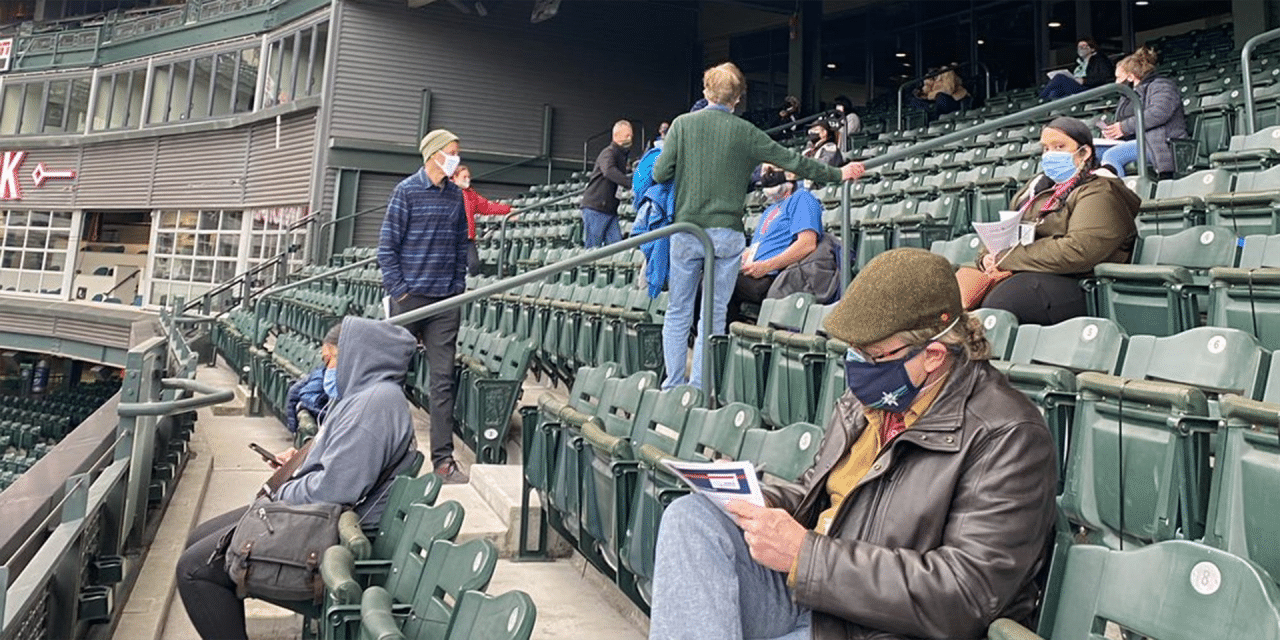 Major League Baseball is back, welcoming fans in the stands for a full 162-game regular season. For concessionaires, it brings much-needed financial relief after empty stadiums in 2020 dealt them a massive hit.

As the pandemic lingers, though, it’s going to take a while for them to get up to speed.

This year, initial restrictions on ballpark capacity run from a low of 1,275 for the Toronto Blue Jays at TD Ballpark, a Florida spring training facility, to full capacity of 40,000 for opening day (April 5) at Globe Life Field, home of the Texas Rangers.

Most teams are restricted to capacity between 8,000 and 12,000 to start the season, with a few exceptions. The Colorado Rockies and Houston Astros were both approved for 50% capacity, which amounts to slightly more than 20,000 seats in a socially distanced setting.

As a result, those fluctuations have food vendors that serve MLB parks ramping up in phases as they recall hourly workers who spent last year on the bench. The same is true for many middle managers who were put on lengthy furloughs after the pandemic took hold a year ago, which speaks to the severity of the shutdown.

For the most part, on-site general managers for concessionaires remained in place at MLB parks over the past year, in part to help feed the teams that salvaged a 60-game regular season in 2020, said officials from Aramark, Centerplate and Delaware North Sportservice. 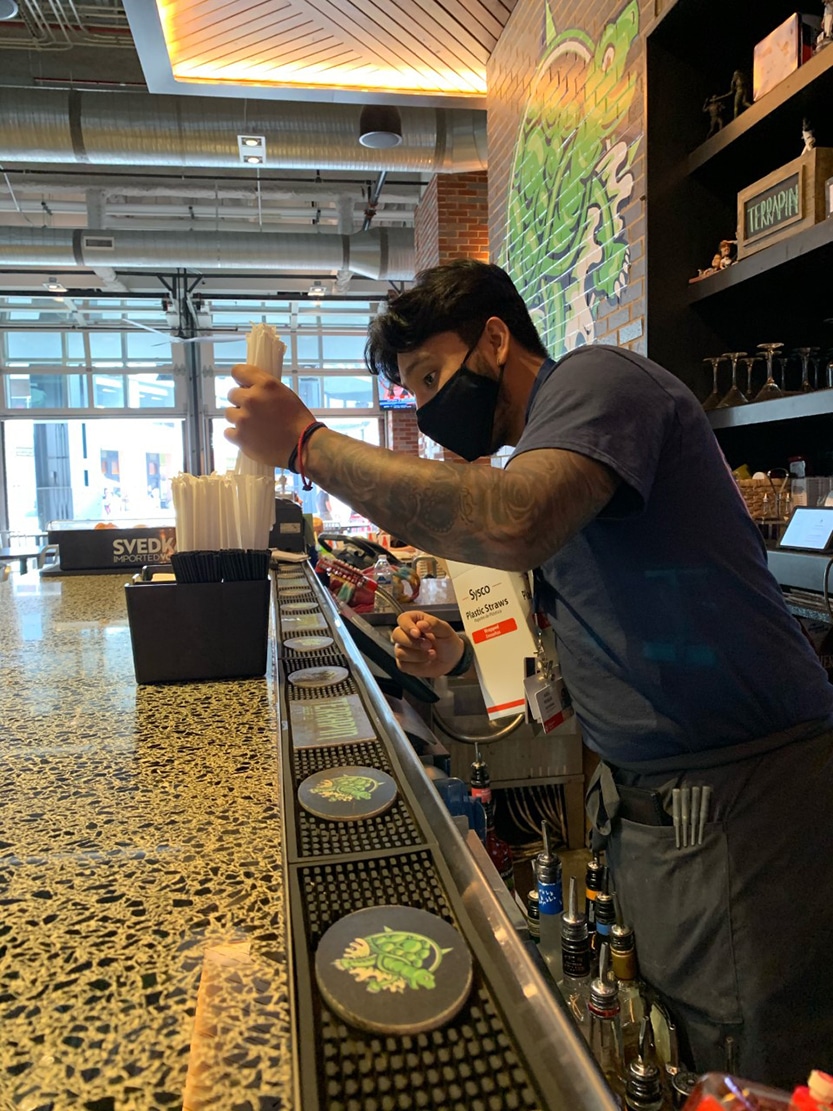 A Delaware North Sportservice worker wears a mask at Terrapin Taproom at The Battery Atlanta, adjacent to Truist Park. The bar and restaurant has been open since July. (Courtesy Sportservice)

Those salaried employees in supervisory roles who were cut loose last year are returning, but they may be filling other positions until capacities increase and they can resume their old jobs, they said.

“We’ve had to make some difficult decisions in the last year, things we never thought we would be doing,” said Alison Birdwell, president of Aramark Sports and Entertainment. “We did furlough and lay off some of our management team, as did most of our competitors. I’m excited to be welcoming some of our managers back. The day we all dreamed of was when we could pick up the phone (to recall them) and we’re beginning to do that.”

Overall, questions remain about how things will play out over the season with ballpark attendance, which in turn will determine the level of service vendors provide for general concessions and premium dining.

Concessionaires said it’s tough to gauge the point at which ballparks across MLB will hit critical mass given the current restrictions, while keeping in mind the vast increase in vaccinations over the past three months.

At the same time, coronavirus cases have recently spiked in some regions such as New York and Michigan, creating renewed concern among health officials over reduced restrictions on mass gatherings.

Historically, many big league teams struggle to draw fans in April and May anyway because of cold weather and school still being in session, so it could be summer before some clear trends emerge in the pandemic age.

To start the season, for example, Aramark has all concession stands closed at Oakland Coliseum, where capacity is restricted to 12,188, per California law. It’s all mobile ordering with in-seat delivery, so the number of game day workers required for A’s games will be less compared with Minute Maid Park in Houston, another Aramark client, Birdwell said.

Some industry experts have their doubts whether demand will exceed supply in the early stages of the 2021 season.

“The big question I have is are people really clamoring to fill a stadium,” said food consultant Chris Bigelow. “I don’t think so. But everybody’s saying they’re going to start bringing hourly people back and middle management to supervise them and it appears to be starting. There’s a lot of people out there that haven’t found other jobs.”

Mike Plutino, another food consultant, said, “If this spigot gets turned on a little quicker than we thought, that’s a lot of people to bring back. The (initial) thought is not everybody is coming back. It’s all about how fast these parks ramp up.”

Spring training provided an early glimpse into the rehiring process for concessionaires.

Spectra runs the food at Sloan Park, Salt River Fields at Talking Stick and Hohokam Stadium, three Cactus League facilities. At times, it was a challenge to have enough hourly workers to staff those spring training venues, even with restricted seating of 2,000 to 2,400, said Jay Satenspiel, Spectra’s senior vice president.

“A lot of people, quite frankly, have gotten comfortable sitting home collecting unemployment, stimulus checks and staying safe,” Satenspiel said. “The most important piece for us is not only are we creating and providing a safe environment for the fans, but for the employees. Those folks that come into work have got to feel safe.”

To that end, the pandemic has forged a new dynamic for food providers as they prepare for baseball season. In addition to reaching out to reconnect with part-time workers after a one-year absence, they’re having to put all those folks through virtual training programs tied to new health protocols to keep them and fans safe.

Delaware North Sportservice, the food provider at 11 MLB parks, is going through that process now as the company rebuilds game day staff for the 2021 season. As it stood in late March, more than 5,300 hourly employees had committed to returning to work in baseball, said Taylor Quinn, Delaware North’s talent acquisition manager.

The percentage of returning workers remains fluid in the early stages of the recall, officials said.

Delaware North issued online surveys to game day workers to gauge their interest in coming back to work. Initially, the positive return rate was 55% across the board at the firm’s MLB accounts. The high was 72% at Petco Park, home of the San Diego Padres, Quinn said.

For the more than 40% of former game day workers nationally that did not respond to the survey, Delaware North has been making direct phone calls and sending text messages to get in contact with them, Quinn said.

The positive numbers are trending much higher than for the 2020 World Series last fall, when the return rate was 30% for game day workers at Globe Life Field, where Sportservice runs the food at the Texas Rangers’ ballpark.

The company was heading into baseball season thinking it was going to be severely understaffed, Quinn said. But “people do want to return to work. It’s a matter of their comfort and our ability to convey the safety and that comfort to them.”

Five months later, things have changed in Arlington in a state where venues can now reopen at 100% capacity. For opening day, Sportservice will employ 1,000 workers between game day staff and nonprofit groups, said Casey Rapp, the firm’s general manager at Globe Life Field.

“We’re not finding too much of a challenge now in that location,” said Stix Lozano, Sportservice’s HR business partner. “We’re trying to work through that landscape and how that model works. It’s really setting the bar for us with 100 percent capacity.”

In the Pacific Northwest, the return rate of game day workers has been a strong 90% at T-Mobile Park, where the Seattle Mariners play, said officials with Centerplate. It’s the firm’s only MLB account, but the vendor also runs food at five minor league ballparks.

In Seattle, it helped that Centerplate and Sodexo, its parent firm, kept in touch with those employees as they sat idle during the 2020 season, said Tracey Jenkins, the company’s senior vice president of human resources, sports and leisure.

For example, Sodexo ran an internal marketplace to help workers find employment with other divisions that were up and running during the pandemic, as well as extending benefits as much as they could, Jenkins said.

A handful of salaried employees transitioned to the health care and universities groups, she said.

“The good news is that our core HR team has been working on how we get back to business for some time,” Jenkins said. “As more people take the vaccine and we start to see our (virus) numbers go down, we can open venues with confidence. It’s always the best laid plans … but you just don’t know until you’re implementing them.”