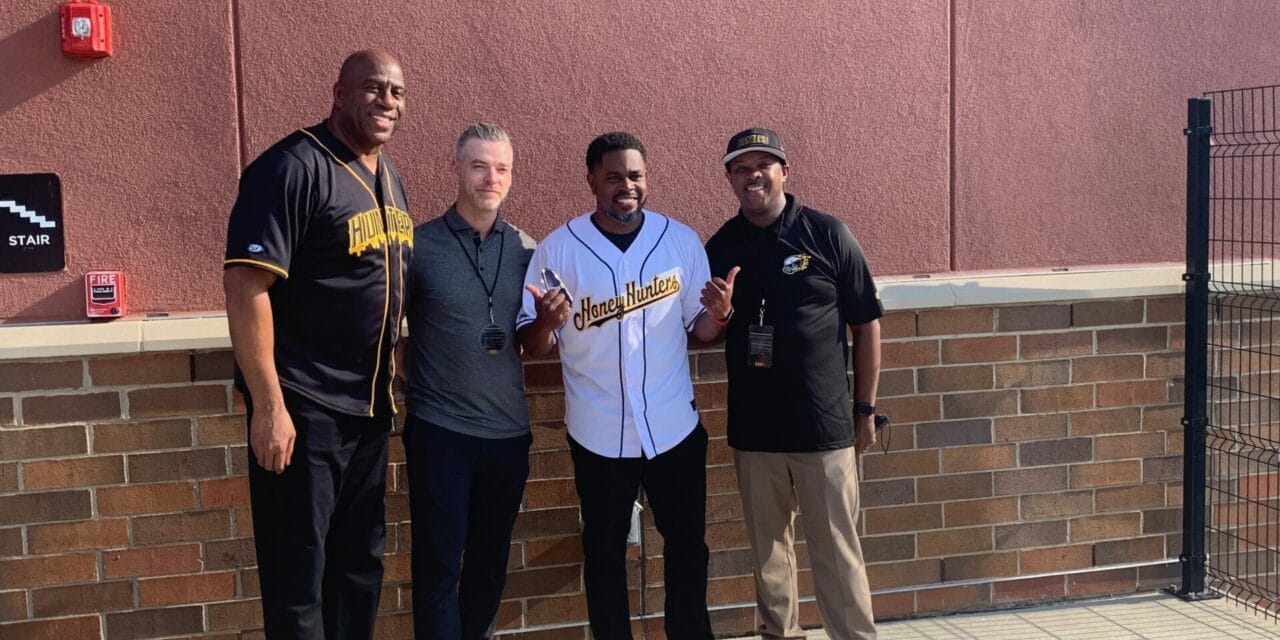 GASTONIA, N.C. — CaroMont Health Park’s food service has a high-profile partner in SodexoMagic, co-owned by NBA Hall of Famer Earvin “Magic” Johnson. It’s one of the few deals in sports for the 15-year-old firm, but its principles fall in line with the strategy established by the new minor league ballpark’s primary tenant.

Brandon Bellamy, a Washington D.C. developer, owns the Gastonia (North Carolina) Honey Hunters, a first-year club in the Atlantic League, an independent baseball organization. Bellamy is believed to be the first African-American majority owner of a pro baseball team.

Bellamy’s intent is to drive the growth of minority-owned businesses for projects involving The Velocity Cos., his real estate firm. In Gastonia, the five-year deal between SodexoMagic, sister company Centerplate and the Honey Hunters is one example.

Together, they formed a new brand, Momentous Hospitality Group, to run concessions and premium dining at the 5,000-capacity venue. The partnership won the contract over six competitors, said Jonathan Harris, the consultant handling the process for selecting a concessionaire.

SodexoMagic was formed in 2006 as a joint venture between Sodexo, an international food service company and Magic Johnson Enterprises, which holds 51% of the company. The company focuses on three “pillars” of operations: community outreach, diversity and investment through employment, training and supplier selection.

At one point, SodexoMagic ran the food from 2009 to 2018 at Rose Bowl Stadium. Most of its deals are with school districts, universities, corporate dining, healthcare and aviation. It also has a presence at Disney’s theme parks in California and Florida, according to Magic Johnson.

Overall, SodexoMagic employs 6,500 workers across 1,700 sites, 72% of which come from diverse populations.

“The approach and operating philosophy that SodexoMagic has in place tied very well together with Brandon’s entrepreneurial firm,” said Harris, founder of JHSports+ and formerly with Professional Sports Catering, a minor league baseball food vendor. “Diversity is a big piece of everyone’s operation now. They just don’t happen to have Magic Johnson as their wing man.”

To show his commitment to the team and Gastonia as a whole, Magic Johnson attended the Honey Hunters’ home opener on May 27. He lives in Los Angeles and is a co-owner of Major League Baseball’s Dodgers.

Before the game, he took photographs with community leaders and concession workers on the club level and answered questions from local media on the field before throwing a ceremonial first pitch.

“We went through the process just like everybody else in chasing this contract,” Johnson said. “This one was special because of what Brandon Bellamy has built and what he stands for. We’ve got to do our job. Brandon is our boss. We’ve got to make sure we do the right thing.”

As the contracted entity, SodexoMagic provides staffing, culinary services, purchasing, IT, legal and licensing services. Behind the curtain, Centerplate runs the operation in Gastonia after the firm “tagged along” on the proposal, Harris said.

It was Harris who suggested they bid together as a team.

Centerplate, acquired by Sodexo in 2017, has the operations experience SodexoMagic lacks, he said.

It helped Centerplate’s cause that it has a strong presence in the region. For many years, company headquarters were in Spartanburg, South Carolina dating to the 1980s when the company was known as Volume Services.

On opening night in Gastonia, Centerplate regional vice president Bobby Dichiaro Jr. was on hand to help Momentous Hospitality Group get off on the right foot. Marcus Williams is the on-site general manager.

Dichiaro has worked for Centerplate and its predecessors for 35 years. He started working at old Yankee Stadium and has opened 20 ballparks over the course of his career.

He knows the Carolinas pretty well.

From a concessions perspective, Dichiario knows the Atlantic League as well as anybody in organized baseball. The league launched in 1998 in the northeast before expanding to the southeast. There are currently eight teams operating in New York, Pennsylvania, Maryland, Kentucky, West Virginia and North Carolina.

“We date back to the Atlantic League when it first started,” he said. “We had all eight teams back then. With minor league baseball going through restructuring, we picked up three teams that used to be in affiliated ball and are now in the Atlantic League.”

In Gastonia, ramping up during the pandemic has its share of issues, mostly having enough game day workers, Dichiaro said. Nationally, it’s been a struggle across the restaurant and hospitality industry as those businesses reopen following the COVID-19 shutdown.

In addition, the opening homestand fell over Memorial Day weekend, at the same time as NASCAR’s Coke 600 race at Charlotte Motor Speedway. Several part-time employees committed to working that event as they do every year. They’ll work the ballpark for the rest of the season, Dichiaro said.

Plus, the concessionaire was waiting on the delivery of portable grills to set up down the foul lines that have been delayed due to the pandemic. Those additional points of sale should help support the ballpark’s fixed stands, two behind home plate and one in the outfield.

On opening night, the vendor was slammed with wait times of 45 minutes to buy food and drink, according to fans standing in line. Two nights later, the fixed stands were much less congested, said ticket holders attending the Saturday night contest.

As they say, though, good things come to those who wait. Momentous Hospitality Group smokes its own BBQ for 20 hours and the pulled pork sandwiches sold behind home plate are served with SunDrop BBQ sauce. Two sliders and chips cost $10.

SunDrop is a soda pop brand native to North Carolina. It was bottled in Gastonia for 100 years before that part of production was relocated to Charlotte.

Centerplate executive chef Brian Snyder came up with the signature recipe for a major team sponsor whose logo claims the sweet spot in dead center field at CaroMont Health Park. Snyder is based at Bon Secours Wellness Arena in Greenville, South Carolina.

“Brandon is a huge proponent of family-affordable pricing,” Dichiario said. “He wants to make sure everybody is out there having a good time and will come back without having to take out a loan.”