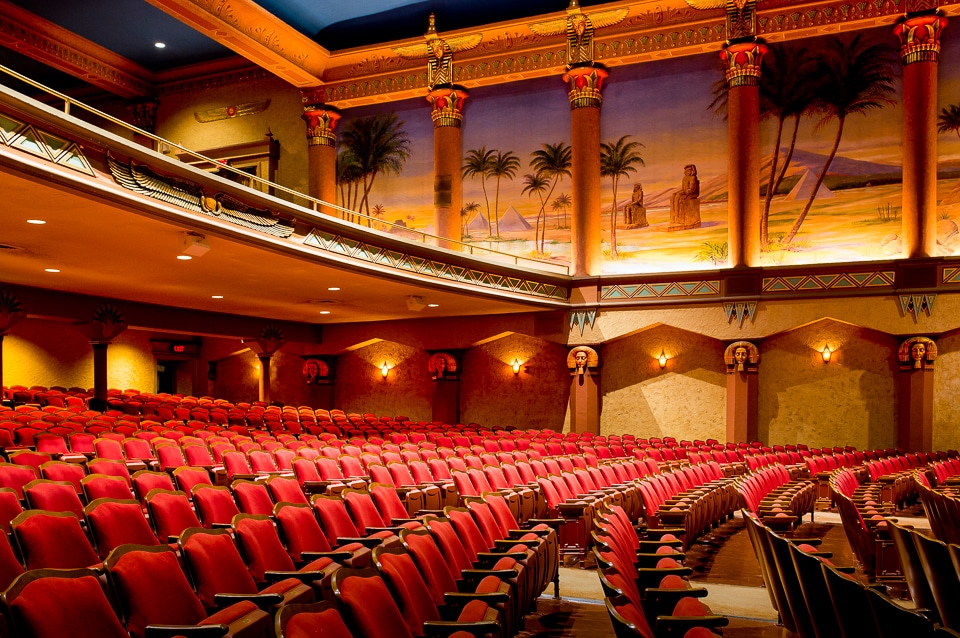 The Egyptian Theatre in DeKalb, Illinois, is ready for action after a $6.5 million expansion and renovation. (Courtesy DeKalb County Convention and Visitors Bureau)

It wasn’t easy finding a place to get a drink in DeKalb, Illinois in 1929 when the historic Egyptian Theatre opened during prohibition. It wasn’t much easier during the pandemic.

The 1,430-seat theater, which underwent a 17-month, $6.5 million expansion and renovation that was completed in the fall, was about the only joint in town where the spirit world came alive, on recent Friday nights, anyway.

Long considered haunted, the theater took to offering “Boo’ze & Spirits” flashlight tours on Friday nights, according to Alex Nerad, executive director of the Egyptian, which since the late 1970s has been owned and operated by the nonprofit Preservation of the Egyptian Theatre Inc.

One of the ghosts said to haunt the theater is that of PET co-founder Irv Kummerfieldt, who died of a heart attack inside the auditorium. Others are blamed for objects being moved, doors mysteriously opening and people feeling a tap on a shoulder when no one’s around.

“One of the things that got us through COVID, since we couldn’t have big events here, we started hosting a ticketed tour,” Nerad said. Guides talk about the history, architecture and otherworldly nature of the Egyptian during the two-hour tours, which are limited to about 25 people.

The expansion project resulted in the theater getting its own liquor license, “so in the beginning of the tours we were about the only place in town where you could go out and get a drink,” according to Nerad.

“So not only was it something to do, but it helped generate revenue for the theater,” he said. “We ended up doing over 20 tours during COVID. They were all sold out and it was just a great opportunity to continue telling the story about the theater and continue getting people inside the building to see all of the improvements that we had just finished.”

The theater also offered a “Ghost Yoga” event on its stage, a takeoff on Goat Yoga and Knittin’ with Kittens, Nerad said, adding that participants were treated to a half-hour presentation on the theater’s numerous phantoms before contorting themselves for an hour.

“It also sold out, did extremely well and is something we’re looking to do again,” Nerad said. “COVID required those of us in arts and entertainment to become even more creative than we were before.” 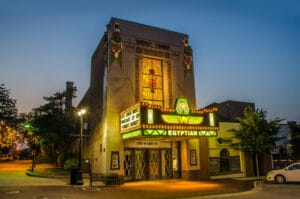 The Egyptian had last undergone a major renovation in 1982. Other work has been done since, including the replacement of the roofs over the lobby and the stage, and the latest renovation, which was already in the works when the pandemic struck, included expanding public restrooms, lobby space, concessions, storage, “but most importantly, for the first time in 90 years added air conditioning to the theater so we could be open year-round.”

The theater’s old boiler was replaced as part of a complete heating, ventilation and air conditioning system upgrade, which presented challenges in the lobby area where there was no existing ductwork, just steam radiators, Nerad said, adding that every project’s goal is to achieve necessary safety, efficiency and guest amenity improvements while protecting the building’s historical integrity.

“We broke ground on May 1, 2019 and that was 90 years to the day when they broke ground on the original theater,” Nerad said. “It was not a coincidence. We picked that day intentionally. It was the first time in 90 years that the footprint of the theater had expanded.”

It was hoped the work would be completed in May of 2020, but “COVID hit and turned everything up in the air,” delaying completion until October, he said.

Renovating a historic theater can turn up surprises, many of them unpleasant, and the Egyptian was no exception, Nerad said.

“That was every day on this project,” he said. “When they built the theater… the original blueprints were five pages. They don’t have very much detail. So, when they started opening up walls and floors and connecting things, between not having much detail from 1929 and all sorts of things having taken place in the building over the last 90 years that weren’t always well-documented, we’d come across old steam pipes and electrical conduits that nobody could figure out where it went to or that now took two days to track down and try to figure out if this is important or not before we cut it.”

Nothing in the original building seemed to be “symmetrical or even or level,” while everything is plum, level and square in the new addition — where all the new restrooms and expanded areas are, Nerad explained.

“Trying to tie that into an existing building that was none of that was very challenging when you start cutting through on the first and second floors,” he said. “They got it pretty close, but it was definitely challenging. They didn’t have the same tolerances, I guess, back in 1929.”

There was also some asbestos mitigation that turned out to be more involved than expected.

“We knew going into the project that we had some asbestos that we were going to take care of in the old mechanical basement but ended up finding more underneath some flooring in the old bathrooms that nobody knew was there,” Nerad said. “That certainly delayed (completion) and added to the cost. It wasn’t completely unexpected, but we were hoping that we wouldn’t find more throughout the project.”

As it turned out, a number of things that were planned and decided on long before anyone had heard of COVID-19 “ended up being extremely helpful, in particular the HVAC system upgrade that allows the theater to meet all safety guidelines and use higher-rated filtration elements. Even the new Dyson hand driers that were selected were one of the first commercially available units to have HEPA filters that remove viruses and other contaminants.

BACK TO BUSINESS
The Egyptian was a lean operation before COVID, with four full- and four part-time employees, “not nearly enough for what we were doing,” Nerad said. The Egyptian averaged about 180 events per year, around of them 30 national touring acts like family shows, comedy, adult contemporary, country and tribute shows. The mix included about 40 films and the rest were events involving the more than 25 different community organizations that rent the theater.

Having air conditioning will allow for the theater to expand its programming through the hot summer months of the Upper Midwest, Nerad said.

“Being a pretty small, nimble organization we have been able to survive a little better than some of the larger organizations out there that had to lay off a lot of their staff,” he said. “We’ve been extremely fortunate through different PPPs, COVID relief grants, fundraising efforts – as a non-profit organization we’ve done a lot of fundraising over the last 15 months – and so far have been able to keep our staff employed, keep the lights on and now we’re looking to come on the other side and hopefully get back up on our feet.”

The theater applied for a Shuttered Venue Operators Grant and as of Friday was waiting for an answer.

The Egyptian has been hosting small, socially distanced movies and dance recitals, but June 25 will mark its first national-level event, a reduced cap performance by Brothers Revival, an Allman Brothers tribute act, and in August will return to full capacity, Nerad said.

The Egyptian, one of only seven remaining of the more than 100 Egyptian theaters that were built across the U.S. and the only one east of the Rockies, draws from the western suburbs of Chicago, which lies about an hour drive from DeKalb, as well as western and northern Illinois and southern Wisconsin, Nerad said.

“We’re just really fortunate that the community stepped up and saved this theater, literally from the wrecking ball in 1978, (and) formed our non-profit organization, got it listed on the National Registry of Historic Places and were able to renovate, restore and continue to operate it to this day,” he said.

As for whether or not the Egyptian is haunted, Nerad is unequivocal.

EGYPTIAN THEATRE RENOVATION AT A GLANCE