Momentum for Cashless and Touchless Continues 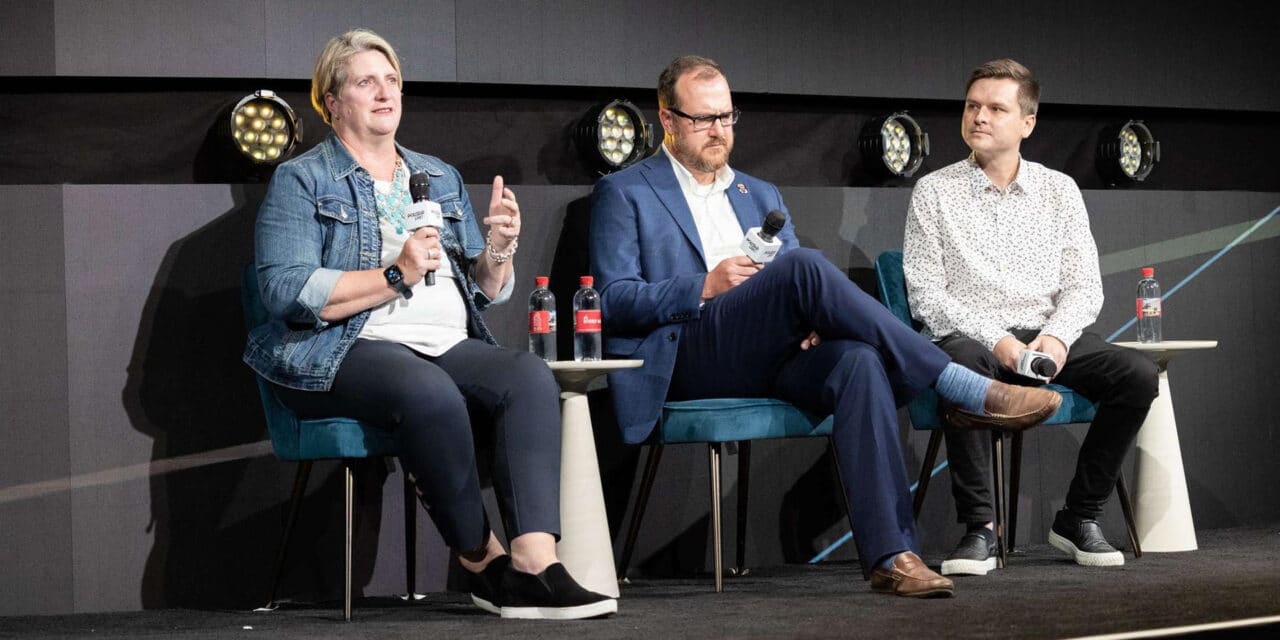 Amy Latimer, Michael Conley (center) and Stas Chijik talk touchless at the PollstarLive! panel “I Really Did Forget My Wallet: The Next Era in Cashless/Touchless.”

Experts on Pollstar Live! panel discuss their experiences with the technology

As contactless technology adoption accelerates in venue ticketing and concessions as a result of the pandemic, several experts weighed in on the subject during the panel “I Really Did Forget My Wallet: The Next Era in Cashless/Touchless” at the 2021 Pollstar Live! conference in Los Angeles last week.

Amy Latimer, president of TD Garden — home of the NBA’s Boston Celtics and the NHL’s Boston Bruins — and chief development officer for parent company Delaware North Cos., said getting started with contactless was a matter of improving game days for fans during the “streets to seats” portion of their experience.

Making things as safe and easy as possible is the goal, she said, and all of the touchpoints were examined to that end.

“We just did a $100 million renovation to kind of fix stuff from the past, prepare for today and make sure we are anticipating for the future,” she said.

Michael Conley, senior vice president and chief information officer for the NBA’s Cleveland Cavaliers and Rocket Mortgage FieldHouse, said the team starts with a problem and works backward “to fill in use cases” and come up with solutions.

“We were up against probably the most monumental moment in our generation, the pandemic,” he said. The organization had begun looking at mobile ordering but was “probably sitting on early adoption” before the pandemic brought a greater sense of urgency.

The first step is to gauge fan appetite for the technology and then think about how to make a better experience for fans overall, he said.

“If you are making it more challenging for them to create an order as opposed to walking up to a concession stand (in a way) they are already used to, it’s going to be a challenge to get people to adopt it,” he said.

And beware of “app fatigue” he said.

“We have so many different apps that are out there in the space,” he said. Fans are often asked to download a team app, a facility app and a ticketing app.

The team didn’t have to worry about integrating different local platforms and took a “crawl, walk, run” approach to implementation, he said.

Keep a close eye on key performance indicators, “leave your personal biases out of whatever you expectations are and allow fans to guide you,” Conley said.

Stas Chijik, co-founder and CEO of BillfoldPOS, said his point-of-sale, access control and marketing company was running high-volume events five years ago in New York and wanted to make the customer experience as smooth and easy as possible.

“That’s now really more than relevant,” he said. “We’re getting out of the pandemic and guests are looking for that speed (of ordering and receiving food or merchandise).”

Wayne Scarsella, executive vice president of sports and entertainment at point-of-sale and payment processing outfit Appetize, said mobile ordering platforms must be not only easy to use but easy to integrate with.

He said pre-pandemic, tools like Apple Pay and Apple Wallet had utilization rates in the single digits, typically between 2% and 5%.

“What we saw coming out of the pandemic, if there is a silver lining, is that it’s motivated and kind of forced the usage of QR codes, mobile ordering,” he said. “Even when you go to your favorite restaurant, you’re somewhat forced to use that phone.”

Scarsella said he’s talking to a number of teams that are transitioning from fixed point of sale to more agile mobile solutions, “whether it’s a QR code, ordering fron the back of seat, off of a digital menu, off a cupholder.”

“The fans are ready for it,” he said.

“For us, this started quite a ways back … with the launch of digital ticketing, really,” he said of the migration to contactless at venues.

Agreeing with Conley, he said that the ticket is often the first touchpoint a fan has in the eventgoing experience and that the digital ticket offers an opportunity “to have a proactive engagement with fans before the event, right around that point of entry, during and after.”

“We’ve seen dramatic increases in fans who are interacting with tickets just digitally,” he said of the pandemic era. “A lot of that was painful because of this pandemic, but it’s put us in a fantastic position to engage better with fans moving forward.”

Latimer said the goal at TD Garden, which began a cash reduction effort three years ago, is to eventually have ticketing, payment, age verification and loyalty all rolled into one.

“I’m sick and tired of not being able to get all of that into one place,” she quipped.

Conley said the technology piece solves some problems but can bring up others, like 1980s-era kitchens that aren’t set up for mobile ordering.

Eventually, Scarsella said, artificial intelligence will help solve some flow problems and bottlenecks as fan ordering trends are better predicted, but in the meantime it can be necessary to throttle ordering as a way of keeping systems from getting overloaded.

Cashierless stores within venues, like the Amazon-powered grab and go store at TD Garden, allow fans to swipe a card, shop and exit seamlessly, with the charge showing up on their credit card bill. They’re another growing trend in contactless, and Chijik said biometrics are likely to be the next phase in mobile payment, making it possible to go to an event without a wallet … or even a phone.