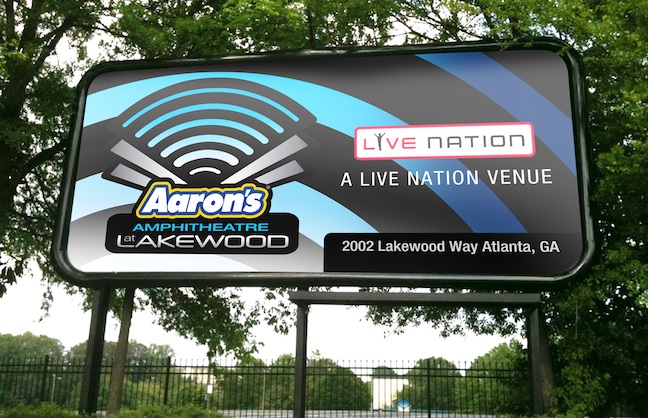 Terms: Three-year deal that is scheduled to expire in 2014. Aaron’s has the option to renew for two additional years, which extends the deal to five years and expires in 2016. Financial terms were not disclosed.

Comments: Aaron’s, the residential and office furniture lease ownership company, has teamed up again with Live Nation as the naming rights sponsor of the live entertainment conglomerate’s Atlanta-based shed.

Financial terms were not disclosed, but Aaron’s will retain the naming rights for Aaron’s Amphitheatre at Lakewood for three years, which will expire in 2014. The company has the option to extend the deal for two additional years which will take the agreement through 2016.

The deal ushered in a new logo and signage throughout the venue, in addition to two new luxury observation sections that contain their own bars and private access.

According to Garet Hayes, senior vice president of Hope-Beckham, Aaron’s PR firm, the new look of the signage — which appears to show waves of sound — was chosen to “reflect a modern, music-focused theme.”

The company began its naming rights relationship with Live Nation in 2009 after Aaron’s took over the name of the shed from the bankrupt HiFi Buys.

“Aaron’s is very happy with the opportunity to gain exposure through the naming rights,” Hayes said, adding that the company also sponsors two NASCAR races annually at Talladega, and it advertises at the Georgia Dome, Turner Field and at 30 college sports stadiums and arenas around the country.

The amphitheater’s capacity is about 19,000, about 7,000 of which are covered seats. The venue is one of the more than 130 facilities owned and operated by Live Nation, which in total produces more than 22,000 events seen by more than 200 million fans annually.

Terms: The 10-year, $35-million naming rights deal between the track and Infineon Technologies expired on May 31, ending the name Infineon Raceway. The track is now simply called Sonoma (or Sonoma raceway), and it is looking for a new naming rights partner to sign a 15-year agreement at $3.5 million to $4.5 million per year.

Comments: The famed Sonoma Raceway, home to NASCAR, IndyCar and AMA Superbike races, is on the hunt for a new naming rights partner.

For 10 years, the track was called Infineon Raceway after the semiconductor and automotive technology company Infineon Technologies, but the $35-million agreement expired on May 31. News of Infineon’s decision not to renew the deal initially broke in March in a financial filing by the track’s owner, Speedway Motorsports, Inc.

According to Frank Gullum, Sonoma’s vice president of sales, the race track is seeking a 15-year agreement worth between $3.5 million and $4.5 million annually. Assisting the track with finding a naming rights partner is Florida-based Cordova Marketing Group which helped negotiate the original deal with Infineon.

“Several companies have expressed an interest in the naming rights,” Gullum said. He did not disclose the names of those companies.

The 2.5-mile road course opened in 1968 and has a capacity of just over 100,000. It was originally called Sears Point Raceway after Sears Point Ranch in Sonoma. Infineon acquired the naming rights in 2002.

Jennifer Imbimbo, manager of media and community relations for the track, said the new sponsor will receive several opportunities in addition to naming rights.

“The deal would include exclusive naming rights on all marketing, sales, PR, ticketing and facility aspects,” she said. Additionally, signage will be placed throughout the grounds, and the sponsor will have access to track days, luxury suites, facility use and other assets.

“Based on each company's needs, the model may change,” Imbimbo added.
Sonoma hopes to have the new naming rights sponsor in place before the end of the year, but the track plans a rebranding initiative in the late fall whether a new sponsor is signed or not, according to officials.