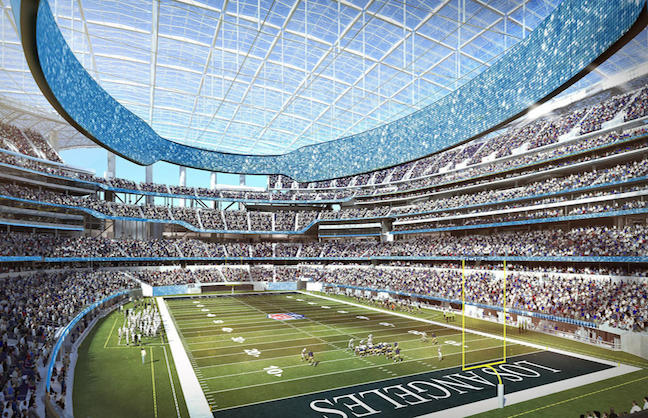 National Football League (NFL) team owners unanimously voted at their spring meeting in Chicago, May 23, to move Super Bowl LV, which will take place in February 2021, from Los Angeles to Raymond James Stadium, Tampa, Fla., after it was announced earlier this week that the new stadium being built for the Los Angeles Rams and Los Angeles Chargers is being delayed by a year.

Last May, the NFL announced that the new Rams and Chargers stadium in Inglewood, Calif. would host the 2021 Super Bowl but delays at the new stadium have dashed that dream. The NFL team owners did agree to tentatively let the stadium host the Super Bowl in 2022 should the project's new completion date in 2020 be met.

While the news of the delay is not getting hallelujahs from one group, namely the teams building the new $2.6 billion home to the Los Angeles Rams and Los Angeles Chargers, it was met with delight by operators of the temporary homes of the two teams, Los Angeles Memorial Coliseum (Rams) and StubHub Center (Chargers), both in Los Angeles.

The Rams put down stakes at LA Coliseum for the 2016 season after moving from St. Louis, while the former San Diego Chargers will kickoff their stay at StubHub Center in the summer. Both teams already had options in place to continue playing at their temporary venues.

“I was told on May 17, that the Rams would be exercising their fourth year option,” said an elated Joe Furin, GM, L.A. Memorial Coliseum. “Obviously, it’s an additional year of revenue. More importantly for us, a fourth year of having the Rams solidifies the experience the fan base has with the Coliseum.” Furin did not disclose a dollar figure for the extra year of revenue but did offer that it will be “a significant amount.”

The fans will remember that they saw their favorite team here and had a great experience here, he said proudly. He recalled that from an operational standpoint, they “nailed it” after a first-game fumble where they learned they needed more water, more hawkers and more medical staff for overheated guests.

There were also questions about how the stadium would handle back-to-back University of Southern California college football games on Saturdays, followed by Rams games on Sundays.

“We had nothing to worry about,” he said. “We had 70,000 people one day and another 70,000 the next, and it all ran like clockwork, so adding a fourth year of the Rams doesn’t present any new operational challenges. We’ll just keep doing what we’ve been doing successfully.”

“We talked about the potential of a third year when we first started talking to the Chargers,” recalled equally thrilled Katie Pandolfo, GM, StubHub Center. “There are so many unknowns with construction, and if the stadium in Inglewood was done by 2019, no one knew if it would be ready for preseason, or opening day in September, or if they’d play in the temporary stadiums for the first month or so, and then move into Inglewood. It was always in the back of my mind they’d still be here for the 2019 season.”

“We’re just getting ready to host our first year of Chargers,” said Pandolfo, full of anticpation.

“This means the Chargers will be crashing on the (LA) Galaxy’s couch for one more year,” she said, laughing. “This means we will manage both teams for three years, instead of two, which I’m excited to do.”

Major League Soccer’s (MLS) L.A. Galaxy is the tenant team of StubHub Center and the MLS season can stretch out till December based on how the team does, which means there is a strong possibility Pandolfo will have to navigate going from a soccer stadium one day to a football stadium the next.

“We’re accustomed to tight turn-arounds on the field because we had two MLS teams here at one point,” pointed out Pandolfo. “We’ll have to wash out the soccer lines and paint football lines and transform the stadium. We’re ready.” Pandolfo said they have an in-house turf crew that will do the job and doesn’t expect any major cost to the process of changing the field.

As for the benefits of having the NFL team at StubHub Center for an additional year, Pandolfo said that while she has no exact numbers since the Chargers have yet to play at the stadium, she does expect a bump to food and beverage due to the quarter-period setup in football, meaning more breaks to sell product, and she sees the potential for slightly higher parking fees based on the NFL culture of tailgating. “Football is a four-hour event, it’s not just 90 minutes,” she said. Levy Restaurants is the stadium concessionaire.

Pandolfo also thinks the extra year will benefit her new tenant. “The Chargers will have an environment here that’s different from any other NFL stadium and to have that for an extra year will be good for the team,” she said. “This will give the Chargers the ability to build up their fan base here in LA.”

Normally rain-starved, Southern California saw record-setting rainfall in late 2016 and early 2017, more than it saw in the five years leading up to it.

Rendering of the Southeast view of the new LA Stadium & Entertainment District at Hollywood Park.

“The rain fell during the mass excavation period of construction when no other work could proceed in wet conditions,” said a statement from the project’s development team, Legends Project Management and Turner AECOM Hunt. “As a result, we experienced significant delays and lost the better part of two months from early January into the beginning of March. In the best interest of the project, we have decided to move the opening date to summer of 2020. This is a stadium that Angelinos, visitors and world-class athletes will celebrate for years to come, and we are committed to making sure this venue is exceptional from the day it opens.”

While making the best of a bad situation, there’s little doubt the delay will have a meaningful impact on the financer, Rams owner Stan Kroenke and his investors, and the Chargers as well. Reports are that each team stands to lose $150 million in revenue due to the construction delay, and both will have to absorb the costs of staying in their makeshift LA venues — Los Angeles Memorial Coliseum for the Rams, StubHub Center for the Chargers — for an extra year.

Rendering of the Northeast view of LA Stadium & Entertainment District at Hollywood Park.

The new Rams and Chargers stadium, currently called LA Stadium & Entertainment District at Hollywood Park (LASED), will surely change names after naming rights have been bought (see here). The 70,000-seat stadium and 300-acre entertainment district is being built on the site of the retired Hollywood Park Racetrack, Inglewood, Calif. In addition to being the new home of both L.A. Chargers and L.A. Rams, it will also feature other sporting events, major concerts and other entertainment year-round.

“It was a super aggressive schedule,” he said. “We anticipated no more than about 30 rain days in the entire 36 months or so of construction. We encountered almost double that in two months (January-February), which came at the most critical time.”

“Our promise is to deliver a transformational district…we owe it to NFL fans, partners of the project, the cities of Inglewood and Los Angeles, and the NFL to get this right,” said a statement from LASED.

As for the revenue loss, Demoff said he couldn’t give an exact number but that “certainly, there will be a revenue hit and there will be an added expense hit.”