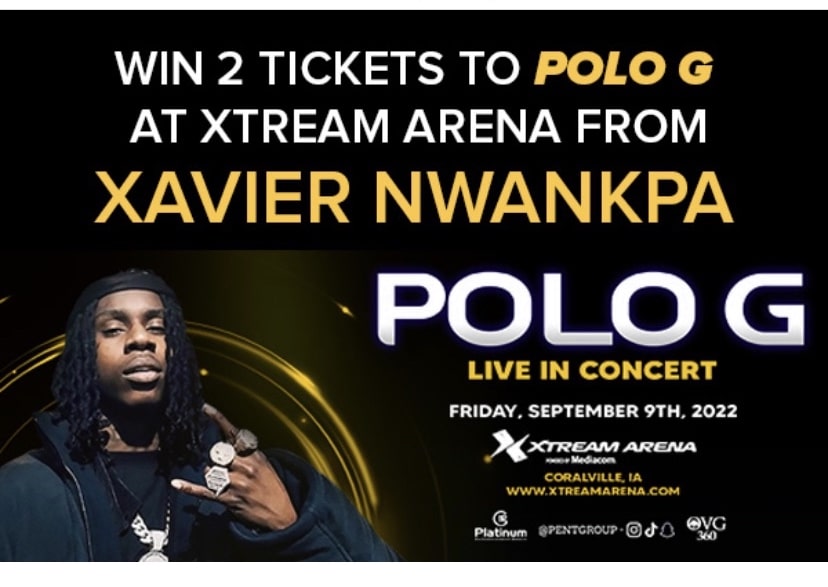 The new landscape in college sports tied to Name, Image and Likeness remains a vast frontier one year after it took effect. One arena in the shadows of the University of Iowa has capitalized on the wide-ranging platform to help promote an event.

Xtream Arena, a public facility run by OVG360 in Coralville, Iowa, opened two years ago during the height of the pandemic as the new home of Iowa women’s volleyball, with few events and restricted attendance. As arena officials regrouped for a “grand reopening” this fall, they coordinated two separate NIL deals with Iowa Hawkeye athletes to publicize a Sept. 9 concert by hip-hop artist Polo G at the 5,100-capacity facility.

The NIL program, implemented by the NCAA in 2021, allows college athletes to be financially compensated when their name, image and likeness are used in marketing endeavors.

In this case, Iowa freshman defensive back Xavier Nwankpa, a heralded 5-star recruit, plus all 15 members of the Iowa men’s basketball team, received complimentary tickets in exchange for promoting the Sept. 9 concert ahead of time across their respective social media channels.

For the public, tickets cost $39 for students and up to $65 for floor seats. Concert attendance was about 4,000, near capacity, said Rori Carlo, Xtream Arena’s director of marketing.

No cash changed hands between OVG360 (parent owner of VenuesNow and Pollstar) and the student-athletes. Granted, it’s a tiny piece of business compared with the seven-figure NIL deals signed with some college football players, but it’s one example of what venues can do, especially those in college markets, to fill seats and generate revenue.

Nwankpa was unable to attend the show because Iowa played Iowa State the next day at Kinnick Stadium and he had to stay with the team at a local hotel the night of the concert, Carlo said. As a result, the two tickets he received were turned into a promotion in which people signed up online for the opportunity to win those tickets.

Nwankpa posted the contest with a link to registration on his Instagram account, which has 32,200 followers. About 300 people registered for the promotion, a decent number considering the last-minute adjustment, Carlo said. As compensation, Nwankpa received a poster autographed by Polo G.

The basketball team, with senior guard Connor McCaffrey (and the son of Iowa head coach Fran McCaffrey) serving as NIL point man, had all players attend the concert. Apart from free tickets, the players were part of a private meet-and-greet with the artist, Carlo said.

“We have to reach those kids that are five minutes away on campus because traditional marketing doesn’t do anything for us on a hip-hop artist,” said Jason Anderson, Xtream Arena’s general manager. “The athletes are now our marketers. Instead of spending ad dollars with a local radio station, we’ll spend it on an NIL deal and have them tell our story. It’s early and we’re still trying to figure it out.”

Xtream Arena got the idea from some venue staff that follow Nwankpa on social media and knew of his Polo G fandom. Carlo reached out to MGC Sports in Nashville, Tennessee, the agency representing Nwankpa for NIL deals and signed an agreement.

It was more of a handshake deal for the Iowa hoopsters after arena officials found out the team’s director of basketball operations was bringing recruits to the concert and they decided to invite the entire team. Carlo communicated with Connor McCaffrey through text messages to reach a verbal agreement. All 15 players committed to posting two messages about the concert on their social media outlets.

For Xtream Arena, in addition to selling tickets, the NIL deals provide value through expanding its customer database through the social media posts, including those who registered to win free tickets through Nwankpa’s posts. The basketball team’s posts alone provided spikes in ticket sales over what the arena would have done otherwise, Carlo said.

Moving forward, as the dust settles with greater clarity expected from the NCAA on NIL regulations, OVG360 may to have to work through the Iowa Swarm Collective, a group set up independently from UI Athletics to facilitate NIL partnerships between student athletes and businesses, nonprofits and the local community.

In that respect, cash may be required with future NIL deals for Xtream Arena events, although that’s not always an option for the venue. Carlo said arena officials would prefer to use assets such as tickets, meet-and-greets, early entry and soundcheck access on show days as compensation.

“People are using influencers for all sorts of things now,” she said. “If you use it correctly, it can be a driver for shows and targeted for students, although a lot of people that follow those student-athletes are 40-year-old to 50-year-old men and not necessarily their peers. I’m glad we did it. The town we live in specifically revolves around University of Iowa athletics, so the more we can tie those two pieces together, the better off we are.”