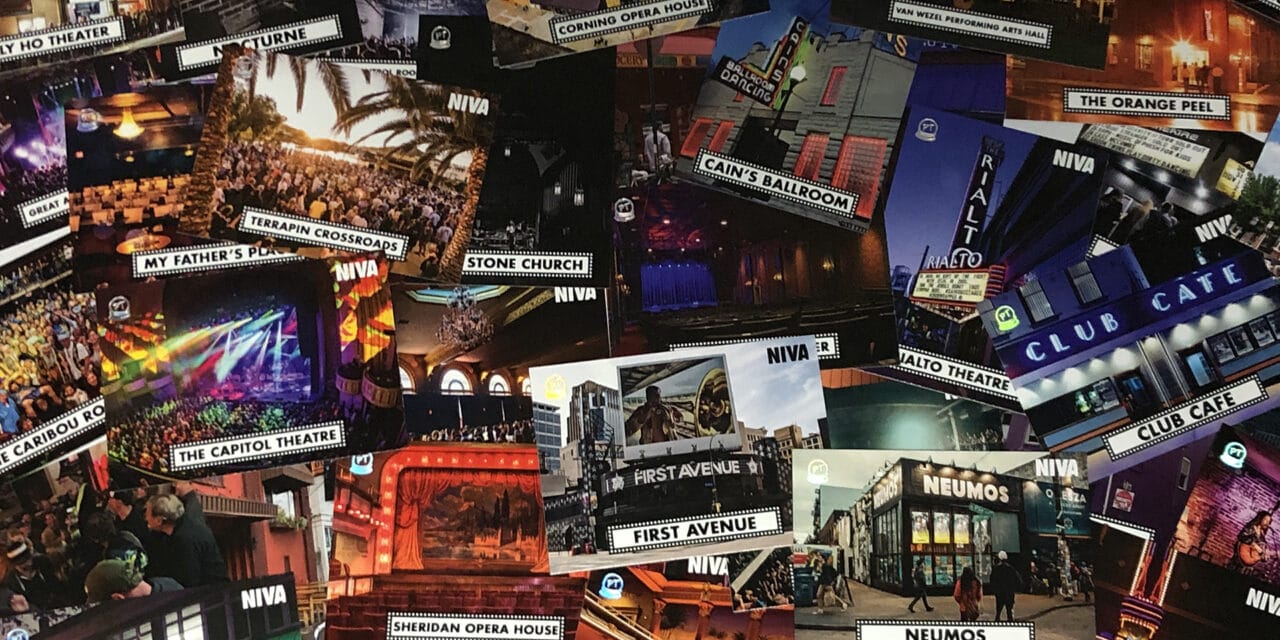 COLLECT ‘EM ALL: Phantasy Tour produced a series of 54 cards featuring venues from around the country. (Courtesy Phantasy Tour)

NIVA puts its cards on the table with collectible venues set

September 2020 was a critical period for the National Independent Venue Association. Months into the pandemic, many of its constituents were in dire financial straits, and NIVA’s membership was deploying a battery of out-of-the-box ideas to generate awareness and revenue for independent music venues.

So, when David Weingarden, vice president of concerts and events at Colorado-based Z2 Entertainment, came across a post by Phantasy Tour, an online hub for live music fans, that showed off the company’s new trading cards featuring musical artists, his mind jumped to how the idea could be applied to the NIVA cause.

What if, instead of the jam-centric artists like The Disco Biscuits and Pigeons Playing Ping Pong who were featured on Phantasy Tour’s first two series of trading cards, the next set showed off some of NIVA’s most cherished venues?

Weingarden, who at Z2 oversees booking at the Boulder and Fox theaters in Boulder, Colo., and Aggie Theatre in Fort Collins, Colo., among others, recalls thinking, “This is perfect.” He quickly reached out to Phantasy Tour founder Paul Glace to discuss the idea. 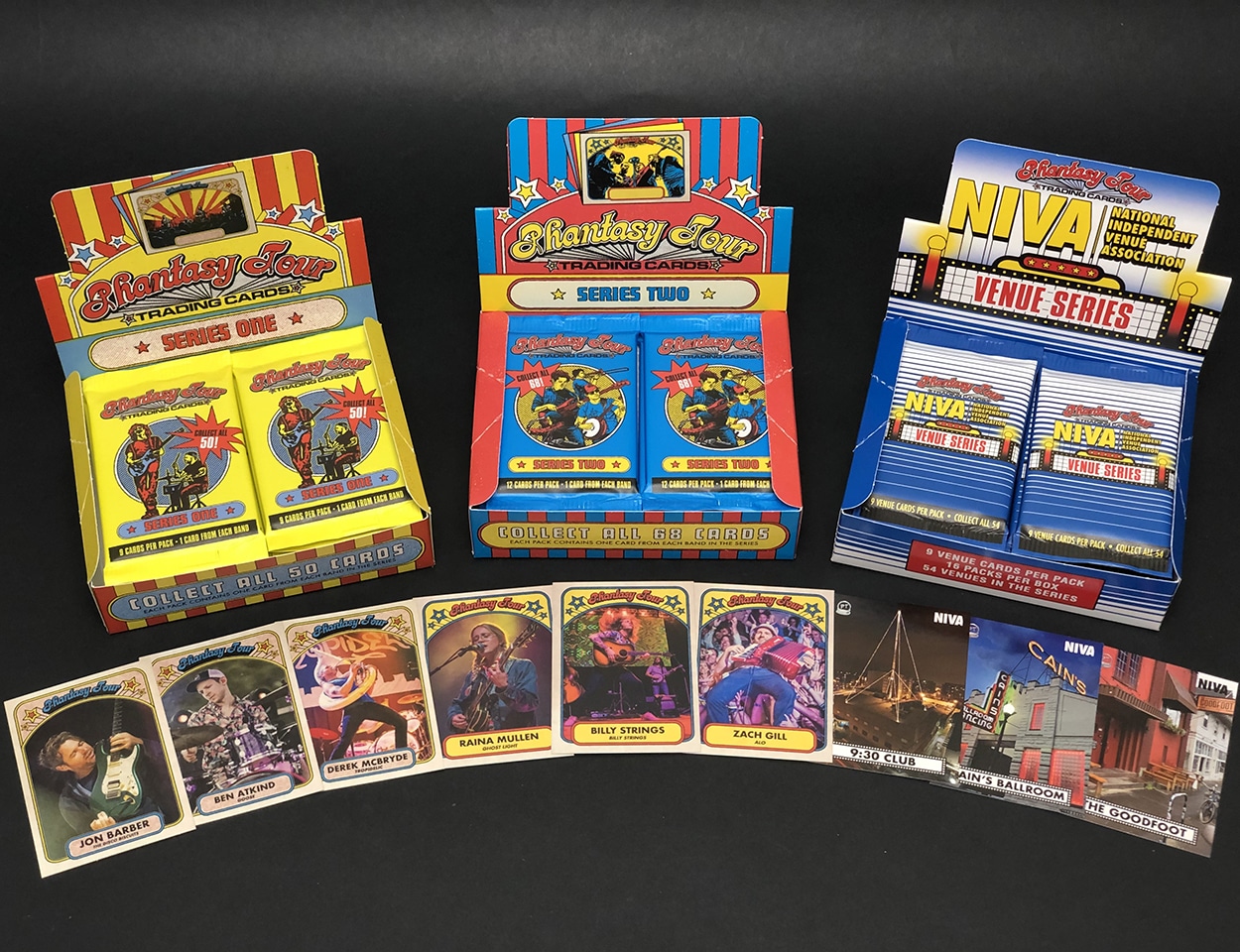 With Phantasy Tour’s buy-in, Weingarden brought the idea back to the NIVA team.

“I thought it was just a genius idea, and I loved it,” said Ashley Ryan, marketing director for Minneapolis’ First Avenue, which is among the venues included in Phantasy Tour’s series. “We have been really getting creative with merch this year, as has everyone. And I just thought, ‘This is so cool, and what a great way to be able to tie in so many venues.’ Because that was kind of a challenge with doing merch for NIVA — we have thousands of members.”

Because NIVA was concurrently “asking everybody to send letters to their senators and do this and do that,” Weingarden said, the organization “needed to make sure that it was as turnkey as possible” for venues to participate in the trading card series. NIVA distributed a simple form for interested venues to provide relevant assets – photos, information about their facilities – to Phantasy Tour, which then sifted through roughly 80 submitted applications to choose the 54 venues that would be featured in the series.

“It was good that they did (the selection) because we wanted to make sure that there was no bias or anything like that involved,” Weingarden said with a laugh.

According to Glace, the selection process was relatively straightforward.

Nate Gonzalez, designer of Phantasy Tour’s two series of artist cards, returned for the venue series, but imbued the cards with a “more modern” look and feel than the artist series, which hewed closer to the aesthetic of classic baseball cards from the ‘70s. Because the front of each venue card has minimal text and a glossy coating, quality photos were essential.

“We definitely had a venue or two that the photo just was not going to work for the card,” Glace said.

After running proofs of the cards by participating venues, the series was ready to go. The cards launched in March 2021, with a run of 3,000 packs each containing nine cards and selling for $10 a pop.

“Every room is a bucket list room,” Ryan said. “We had someone on our team who, the day that the cards were available, messaged me. She was like, ‘I ordered the cards! I really hope I get First Avenue, but I kind of hope I don’t, so I can order some more.’”

“This is a boom era like the industry has never experienced before,” Owens said. “A lot of it has to do with a renewed interest in the hobby and in collecting and trading cards.”

Investors are heavily involved in the sector, treating it “kind of as an alternative to the stock market,” he said.

The NIVA cards aren’t selling for millions anytime soon – though Weingarden joked that maybe the Boulder Theater card will someday go for $10,000 on eBay – but they hit the same centers of emotion and nostalgia that trading cards have for well over a century.

“I can see these trading cards being very valuable to (buyers) and a memento that’s going to bring back a lot of memories,” Owens said. “I think it’s a great idea. I think it’s a lot more than just a marketing tool. It’s got that nostalgia effect to it.”

Owens compared collecting all the venues in the series to a diehard sports fan putting together a set of the certain year of their favorite team. A second-string catcher’s card won’t be as valuable as the same team’s star player, but both athletes hold sentimental significance to the collector assembling the set.

“It’s a personal connection to it that I think people really enjoy,” Owens said. “That’s probably what’s going to be appealing about these venue cards, is that people will want to collect cards from venues that they’ve been to or that they go to often that mean something to them.”

Plus, there’s the hobby element. Card collecting is “like completing a puzzle, but it’s also like a treasure hunt,” said Owens, and tracking down coveted cards can help forge a sense of community with other passionate fans.

The trading cards are just one dimension of NIVA’s broader advocacy, which has worked to illuminate venues as cherished institutions in their own rights, and not just the spaces where fans happen to see their favorite bands.

“What NIVA’s done, and perhaps what this trading card series helps contribute to, is give more personality to the venues,” Glace said.

“First Avenue did a collectible item of a piece of our stage that we replaced since we’ve been closed this past year at the 7th St Entry and it sold out overnight,” Ryan said. “People are associating these emotional responses to physical things. In a year where we’ve had such a lack of (physical connection) I think it makes sense that people are reaching out for something like that.”

All involved in the Phantasy Tour series think the cards will remain popular as fans trickle back into venues. While initial sales benefited NIVA directly, several venues have inquired with Glace about selling packs onsite, as some bands did at their merchandise tables with Phantasy Tour’s artist series in the brief period the cards were available before the pandemic struck.

Sales at venues will benefit those venues directly, he said.

So far, about one-third of the NIVA card packs have been sold. If the series sells out, proceeds for NIVA and venues selling cards will total $10,000.

And, given that NIVA’s ranks now number more than 3,000, there is potential for a future series.

“We’re definitely keeping that door open,” Glace said. “There have been venues that somehow missed it the first time around that have said, ‘Hey, how can we get in on this next time?’”

“This could be something that could be potentially formulated into some sort of card game involving the pairing of musicians and venues,” Glace said. “Like, if you can have Phish playing at the Hampton Coliseum, then that beats everybody else’s hands.”