A personal journey for a married couple to find inclusion for their autistic son has turned into a “sensory inclusive” movement for venues across the nation.

Julian Maha and his wife, Michele Kong, started a sensory training program called KultureCity in 2014 after years
of trying find acceptance for their son in

society. They couldn’t take him to sporting events, zoos, concerts or anyplace with highly stimulating activities.

“It was basically that realization that we were very socially isolated. At that point, we decided to see what we could do to help him integrate more into the community,” said Maha, who is an emergency medical doctor at Prattville Baptist Hospital in Birmingham, Ala.

His wife is a pediatric ICU doctor at Children’s Hospital in Birmingham, but neither of them were knowledgeable about autism until their son, Abram, was diagnosed with nonverbal autism at the age of 2. He’s now 11.

The isolation set in after several difficult events — including Kong being berated in public because of her son’s autistic behavior — prompting them to find ways to bring awareness about the condition.

Now, five years later, nearly 200 venues are integrating KultureCity’s sensory training into operations, opening the door for those who otherwise might not have a chance to enjoy sporting events, concerts and more. A fraction of the venues that hired KultureCity also have built sensory rooms at their facilities, designed by the nonprofit to create a calm atmosphere.

Each location that completes training is certified by KultureCity as a “sensory inclusion” venue and receives signs that hang on the building, showing the venue’s certification. Venues must be recertified each year.

The nonprofit helps venues, from stadiums to convention centers, “rethink accessibility” for guests who have autism, post-traumatic stress disorder, sensory sensitivities and other “unique abilities.”

KultureCity trains staff on how to work with sensory sensitive guests, provides venues with sensory bags that have widgets and sound-dampening headphones and helps venues design sensory friendly rooms on-site where guests can go to unwind during events.

Rocket Mortgage FieldHouse, home to the NBA’s Cleveland Cavaliers, became the first sports venue to hire KultureCity in 2017. KultureCity trained 1,600 front-of-the-house employees at the arena after venue staff and a family visiting the venue had a negative experience. The family reported the incident to venue officials.

Maha said he met a Cavaliers executive while speakng at a conference. “The same week after I met him, they had a very negative PR experience,” Maha said. “A nonverbal boy was going through security, and he had a speaker. The speaker was his security blanket. It was ripped away from the boy, and he had an extreme meltdown. At that point we were called in very quickly.”

The Cavaliers worked with the family involved and had them come to KultureCity’s training to show them the team was committed to including their son and also get their feedback on how to improve, said Antony Bonavita, senior vice president of facility operations for the Cavaliers and the arena. He also has an autistic son.

At the training, the arena’s senior director of guest experience, Patrick Scanlon, asked employees to raise their hands if they had family members, friends or neighbors affected by autism or any limitations that cause sensory sensitivity.

“Seventy-five percent of people raised their hand,” Scanlon said. “And it made us realize this is not a tiny issue we have.”

“We’re proud to have started this massive trend that has really become incredible to watch,” Bonavita said. “I can’t keep up with what KultureCity is doing every day, and to see then open up in Australia is incredible.”

Maha calls the movement an “amazing social good endeavor” to create environments where families can thrive, regardless of their abilities. 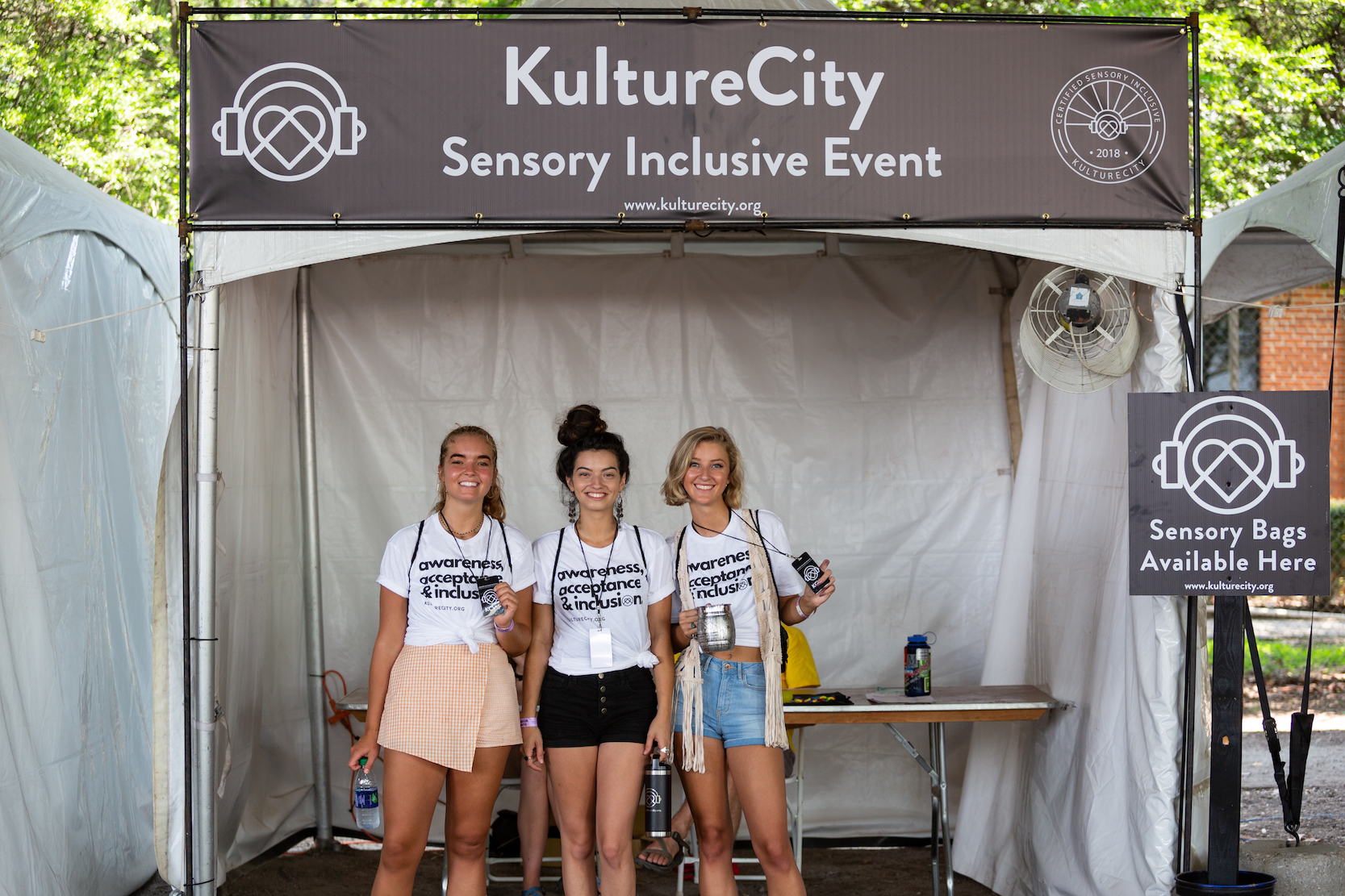 KultureCity has a presence at a variety of venues and events. (Courtesy KultureCity)

The nonprofit has autism therapists, nurses and other medical professionals who act as volunteers, helping guide its team. Maha has one full-time staff member in New York City who does fundraising and relies on volunteers for everything else.

When it started, KultureCity conducted a clinical study with 200 families to identify how to train venue staff to gain more awareness when someone with sensory sensitivities enters a facility.

“There’s also a KultureCity VIP badge. It’s designed to be carried or worn. That’s to help the guest experience people know who has sensitivities without giving away medical diagnoses,” Maha said. The badge has no words, only KultureCity’s logo.

Some venues opted to include sensory rooms in their buildings, but Maha said the training and the bags are the most important aspect of what KultureCity offers. Of the 200 venues that work with KultureCity, only 15 have sensory rooms.

The rooms, which are usually no bigger than a conference room, include various textiles and colors for guests to touch and see. Bean bags, chairs and fidget items are also available.

“They’re designed to be used for only 15 minutes. If a meltdown isn’t resolved within 15 minutes, they might have to walk around the venue,” Maha said.

Little Caesars Arena, home to the NHL’s Detroit Red Wings and the NBA’s Detroit Pistons, has a sensory room and sensory bags, and its front-of-the-house staff was trained by KultureCity.

Last summer, the arena co-launched with Comerica Park, home to baseball’s Detroit Tigers. The Red Wings and Detroit Tigers are owned by Detroit-based Olympia Entertainment, and both venues opted to integrate KultureCity training.

“It’s amazing giving those guests the ability to come to the venue when they thought they couldn’t,” said Amanda Vought, guest experience designer for Olympia Entertainment and the Red Wings. “It’s also amazing seeing the sense of pride that our staff gets when they help the guests. It’s empowering to our staff.”

KultureCity volunteers walk through each venue, helping officials identify where sensory rooms could be placed.

“One of my game-day cheerleading staff members has two daughters who are extremely autistic and they’ve never seen a game,” said Tami Hedrick, director of Vikings women, strategic development and cheerleading. Those girls will now be able to experience a Vikings game day at the stadium.

Hedrick’s role with the Vikings includes finding new ways each year to make the venue more inclusive, and KultureCity fit perfectly into that role. Roughly 1,300 members of U.S. Bank Stadium staff will go through KultureCity training by the end of August, she said. SMG operates the facility

MLS venue Providence Park in Portland, Ore., is in the early stages of training its employees under KultureCity’s guidelines. Staff members were to be fully trained by the end of April, said Kristel Wissel, vice president of community impact for the 22,000-capacity stadium.

So far, KultureCity has only one convention center client, the Charlotte (N.C.) Convention Center. The facility recently signed on with the nonprofit and plans to train staff later in the year. The venue is managed by the Charlotte Regional Visitors Authority.

“The CRVA Diversity and Inclusion Advisory Committee learned about KultureCity through our organization’s partnership with the Charlotte Hornets,” Steve Bagwell, vice president of venues and director of the Charlotte Convention Center, said in an email. “Working with KultureCity aligns with our organization’s commitment to inclusion and our customer service philosophy of delivering memorable customer experiences.”

Venues that work with KultureCity have nothing but praise for the organization and what Maha and Kong have been able to do.

“He’s an unbelievably good human being. He has the ability to make you feel good and have you write a check all in the same motion,” Bonavita said of Maha. “He’s not trying to make money. He’s a guy who’s trying to make people’s lives better.”