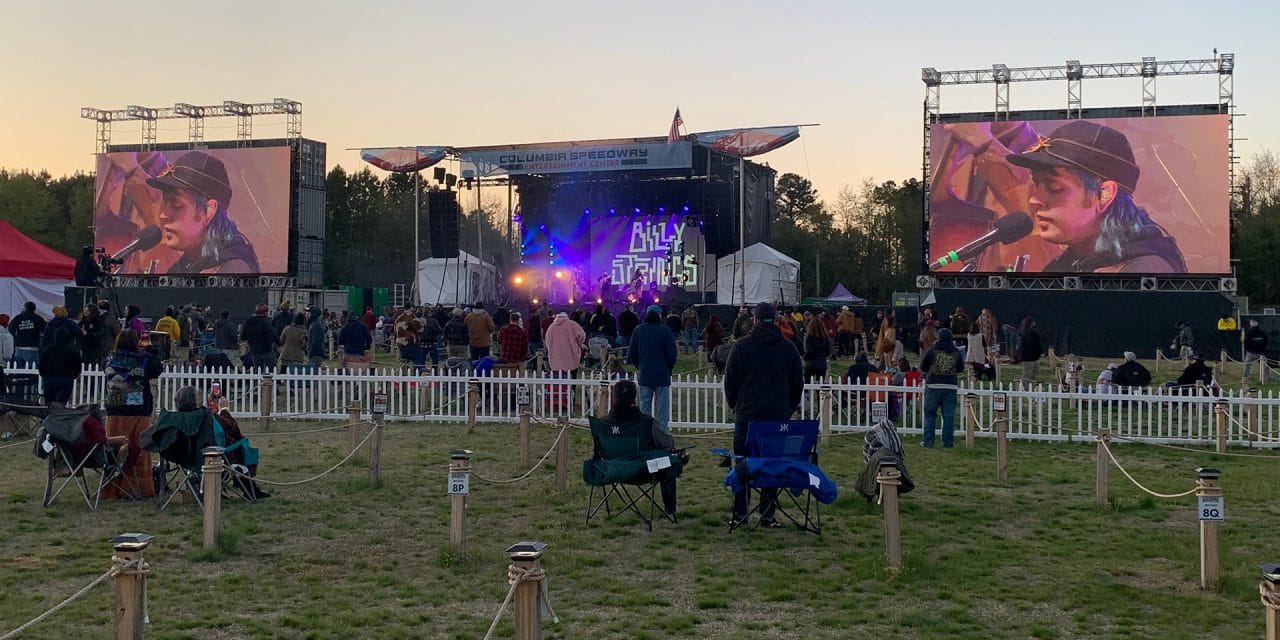 CAYCE, S.C. — The second generation of outdoor concerts pandemic-style is in full swing at outposts such as the Columbia Speedway Entertainment Center on the outskirts of South Carolina’s capital city.

One year after the drive-in concert format kicked in with the shutdown of amphitheaters, the model continues to evolve. It has put the spotlight on nontraditional venues such as the old race track where Richard Petty won his first NASCAR dirt race in 1959.

Over the past decade, the speedway’s old 9-acre grass infield has been converted to a performance space. To this point, the venue has played host mostly to special events apart from concerts.

The focus has shifted to live music during the pandemic. Billy Strings, the newest sensation on the jamgrass scene and the subject of last week’s Pollstar cover story, performed four sold-out nights April 1-4 at the speedway as part of a short tour of the Southeast. 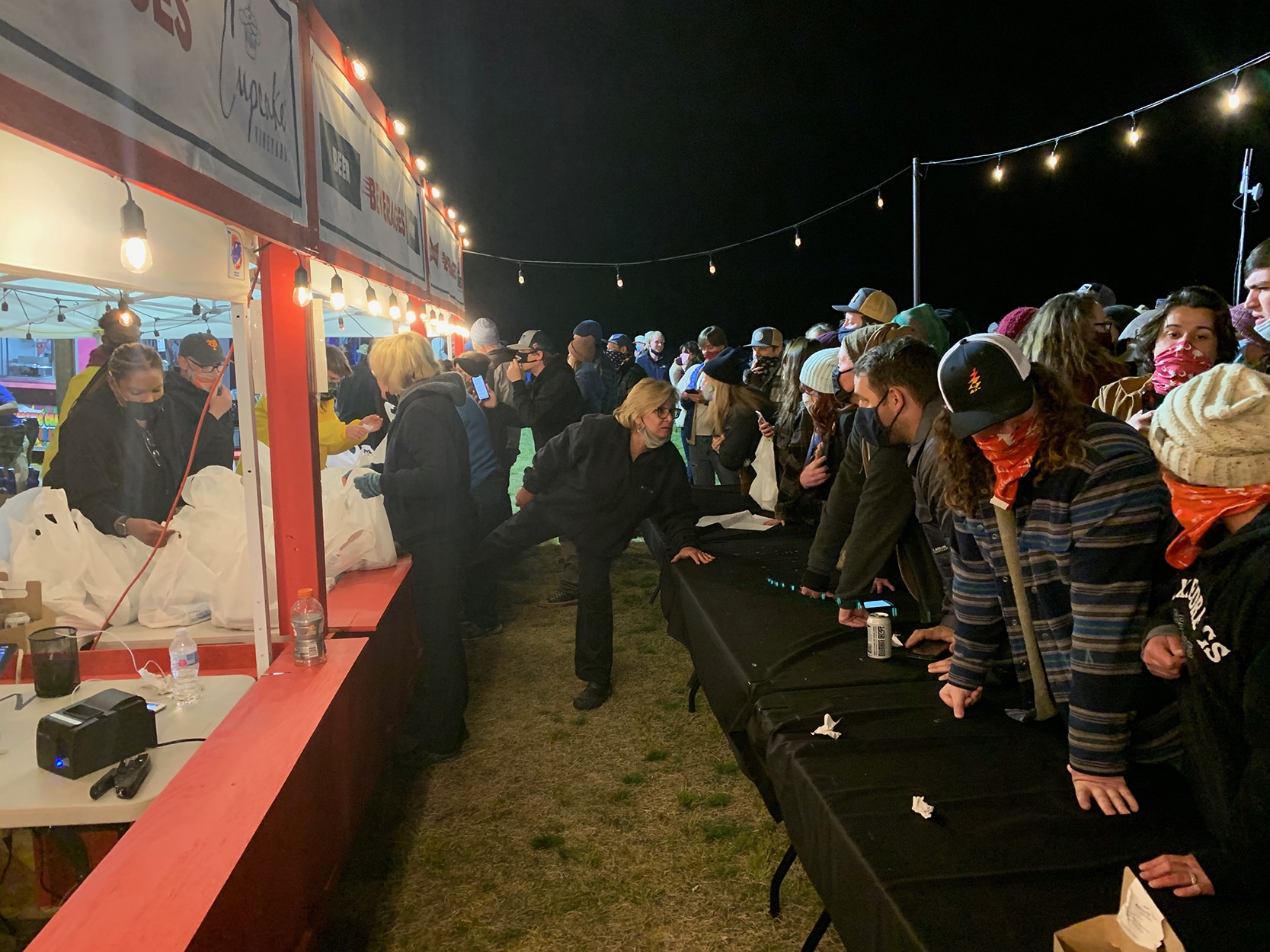 Production tech at the old speedway is a winner, but the mobile ordering system for concessions will require a few more practice laps. (Don Muret / Staff)

The group was the first of 10 acts booked at the facility through early September.

The venue, which accommodates about 3,500 patrons in a socially distanced setting, is in Cayce, South Carolina, a few miles southwest of Columbia. The track is a Ticketmaster facility and follows protocols established by the Centers for Disease Control and Prevention.

For Billy Strings, the ticket price was about $75 a person, including fees.

Tickets are sold in “coves” of four in the infield, spaces which are roped off and numbered. Small lanterns light up the coves in darkness, although it was difficult to relocate your cove after leaving to use the restroom or pick up food and drink.

The concessions operation, labeled “Speedway Eats,” was mobile ordering only. It needs some work.

Patrons ordering items through their mobile devices were directed to a web-based solution instead of a mobile application. For some, it took 45 minutes from the time they placed their order until they received a text message alert that it was ready for pickup. From there, it was a challenge for concertgoers to get their items, packaged into plastic bags. At one point, a large crowd jammed the front of one fulfillment stand as workers behind the counter struggled to figure out the correct orders to distribute.

Otherwise, the show was a pleasurable experience for those that have missed live music over the past year.

For Billy Strings, the parking lot vibe was similar to other jam band gatherings with entrepreneurs setting up portable stands by their vehicles to sell tie-dye T-shirts and other garb. Tailgating was allowed.

Some folks traveled a considerable distance to catch Billy Strings. One woman said she drove 12 hours from the Northeast. In the parking lot, another woman sold Spotted Cow beers for $5 apiece to collect gas money for the drive back to Wisconsin, where the New Glarus Brewing Co. product is sold exclusively in-state.

The track had two entrance queues for ticket holders to walk through a short maze as part of the social distancing model. After getting through security and having mobile tickets scanned, those wanting to buy alcohol had to wait in a second line to show proof of age and get a wristband, which is not unusual for outdoor shows.

People were allowed to bring in lawn chairs for their coves, spacious enough to fit up to eight people. Folks could roam to other coves to visit friends. In a state with no mask mandate, that part of the protocol was somewhat relaxed, considering the increased rate of vaccinations.

The sound, light and video production was first class, considering the nontraditional venue. Two video screens flanked the portable stage and the technology was advanced to a point where floating skeletons danced across the displays during the show.

To his credit, Billy Strings, whose real name is William Apostol, early in the show recognized the “folks wearing the yellow jackets” for helping to enforce the safety protocols. United Security Forces serves as the venue’s crowd management provider.

Considering the temperatures dropped into the low 30s over the first two nights, a tip of the knit cap to those hourly workers braving the atypical weather in South Carolina. They don’t always get the credit they deserve, and in these challenging times, they’re taking on additional responsibilities to enforce the new guidelines.

On Friday, April 2, the band performed two sets over a three-hour period. They mixed selections from their 2019 Grammy Award winning album, “Home,” with covers such as the Grateful Dead’s “Dire Wolf,” Phish’s “Back on the Train” and Jeff Austin’s “15 Steps.”

Post-show traffic was no different than a typical amphitheater show. In other words, there was no orderly manner to exit the venue. It took up to one hour for the parking lots to clear. For those taking Uber after the concert, the challenge was finding the appropriate pickup spot. It would help if the venue marked a designated location for those using ride-share services.