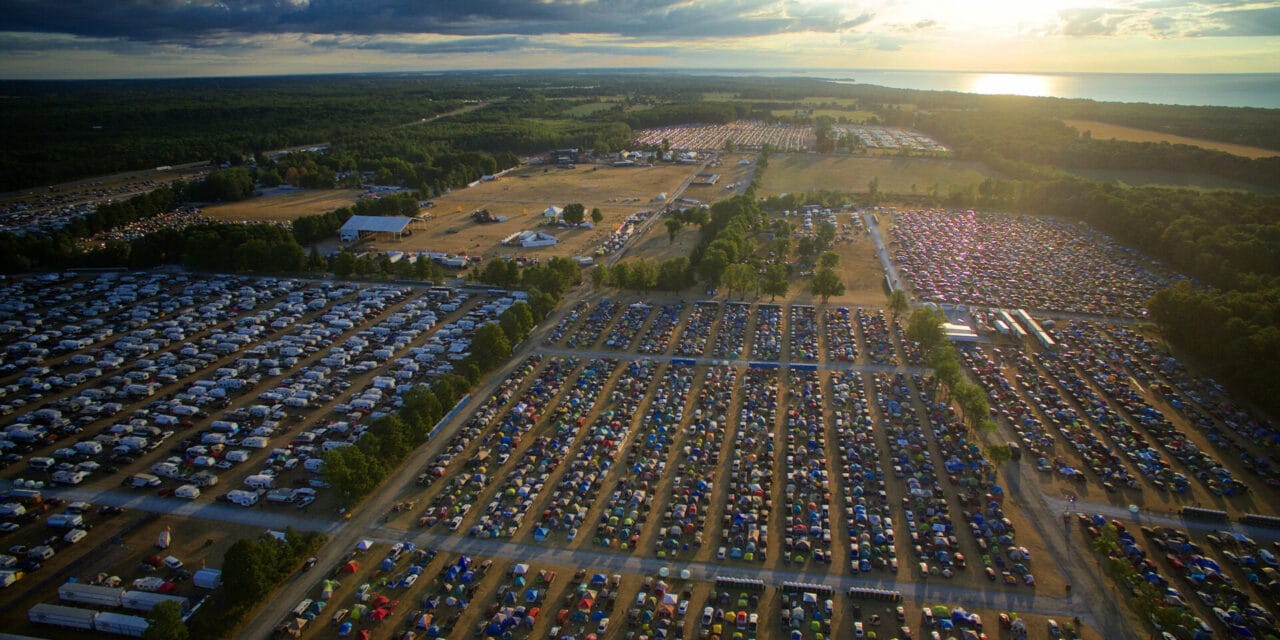 BOOTS, HEARTS & CAMPING: Burl’s Creek Event Grounds in Ontario can accommodate up to 100,000 people, and has been zoned for festivals and camping. (Courtesy Venue)

BURL’S CREEK BACK IN SADDLE FOR EVENTS

The sprawling and lush 600-acre Burl’s Creek Event Grounds is gearing up for Canada’s premier country music festival Boots And Hearts, Aug. 4-7. It’s a much-needed boost with Canada only recently reopening for live events in a larger way.

Kicking off with an emerging-artists showcase, Boots And Hearts is headlined by major country artists Sam Hunt, Florida Georgia Line and Shania Twain. It’s the only festival on the books this year for the 100,000-capacity site, after last summer hosting a socially distanced affair titled Endless Summer Series that featured Canadian acts.

Privately owned and operated by the Dunford family’s Republic Live, the site, which has
hosted concerts by The Rolling Stones, Neil Young, and Kendrick Lamar, was specifically designed for festivals and is zoned for events and camping.

“There’s no venue like it in Canada because of its focus on providing festival ease for large groups of people, but also because it’s scalable,” says Brooke Dunford, Republic Live’s director of booking and brand strategy. Dunford joined the company full time in 2016 and became talent buyer in 2019.

The property was purchased by Brooke’s parents, Stan and Eva Dunford, in 2014 after Boots And Hearts outgrew the 25,000-capacity Mosport Park racetrack they rented.

“The camping numbers blew us away; 98% of the people were camping and that means you need space,” Brooke says.

The previous owners of Burl’s Creek staged Jack Johnson in 2008 and The Tragically Hip in 2012. Also, the Barrie Automotive Flea Market, going on more than 50 years, has been held there since 1983.

When the Dunfords bought it, they spent millions of dollars creating a fan-friendly summer season venue.

“It was a big deal that we got that zoning. It’s something that’s extremely rare to receive,” says Brooke.

The grounds have four performance areas: one permanent stage and three natural amphitheaters. It can accommodate up to 33,000 cars and 16,000 campsites.

“We actually took over fields around the venue,” Brooke said. “We made longstanding deals with other farmer’s fields outside of our entertainment space, which is why we say we occupy that 600 acres.”

The “practical capacity” for the four performance areas range from 8,500 to 70,000, according to the Burl’s Creek promoter guide.

Stan Dunford had no prior experience in the music business. He had built Contrans Corp into the largest publicly traded trucking company in Canada, but when he sold it felt he was too young to retire. In 2011, the country music fan started Republic Live in order to stage a multi-day music festival.

Through a friend they booked Carrie Underwood, leading to the birth of Boots And Hearts in 2012.

While Boots and Hearts has been going strong, and brings in about 40,000 people a day, their Coachella-like Way Home Music & Arts Festival, which launched in 2015, was put on “pause” in 2017. The classic country music and camping festival Big Sky was held in 2019 — the same summer as the Stones concert — then COVID derailed 2020.

But last August, they held the Endless Summer Series with Canadian acts, headlined by Our Lady Peace, The Trews, Tebey and Brett Kissell.

“It was fun to bring a different part of the venue to life for that specific goal, which was to have more space, allow social distancing, get people outside again in a safe way,” said Brooke. “We’ll continue to look at scaling the venue for the needs of different genres and different artists and different events like that.”

Boots And Hearts is the only music festival at Burl’s Creek for 2022, but she’s proud they scored Twain for her only North American festival this year and to have all Canadian country females on the main stage supporting her that day.

“I’m looking to expand for the 2023 season, in a larger way, for sure,” says Brooke, adding that she would like to see the return of Way Home or similar. “We certainly want to be a destination for all genres. So as we grow, focus on putting together genre-specific camping events and always offer a destination for people to experience live music and their friends in a community.”