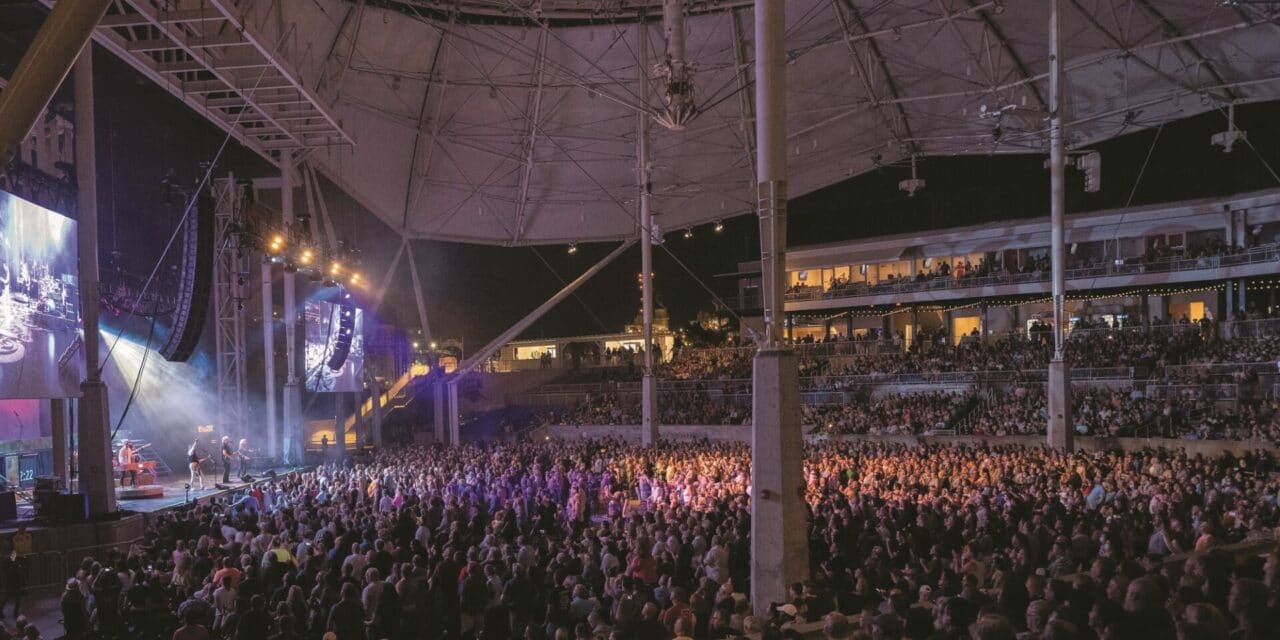 HartfordHealthCare Amphitheater, a $30 million retrofit of a minor league ballpark, opened in Bridgeport, Conn., this summer , complete with Jim Koplik Room showcasing memorabilia he has collected over the years. Photo by Katie Settel.

Jimmy Koplik is widely known as a concert promoter, but he’s also a key developer of outdoor music venues.

Over the past 30 years, Koplik has been principally involved in building four amphitheaters in Hartford and Bridgeport, Connecticut, Darien Lake in upstate New York, plus one at a ski resort outside Scranton, Pennsylvania.

In the early 1990s, Koplik became a partner with John Scher of Metropolitan Entertainment. Together, on the strength of booking Grateful Dead tours in the northeast, they became the No. 2 promoter in the New York/New Jersey market behind Ron Delsener and Mitch Slater.

Koplik soon realized that the Dead with front man Jerry Garcia weren’t going to last forever as a lucrative touring act. Metropolitan needed to refocus its business. Koplik and Scher turned to developing amphitheaters to diversify their interests and form new revenue streams.

“At that time, there really weren’t that many (sheds) in the northeast besides Jones Beach and Great Woods,” Koplik said. “We were still in the age-old business where you don’t own the food and drink and parking. Our only income was from ticket sales, a part of the business that as the artists got stronger, things got weaker for promoters.”

In 1994, Metropolitan partnered with Nederlander Entertainment to run Meadows Music Theatre in Hartford, now Xfinity Theatre, a 24,100-capacity shed. It was among the first examples of rival promoters teaming up to own and operate an amphitheater.

Montage Mountain Pavilion opened in 2000. The 16,000-capacity venue is home to The Peach Music Festival, an annual event curated by officials representing the Allman Brothers Band.

As it stands now, Live Nation runs the amphitheaters in Hartford, Darien Lake and Scranton. It does not have an ownership stake in any of them, Koplik said.

Last summer, HartfordHealthCare Amphitheater, a retrofit of a minor league ballpark, opened in Bridgeport. A boutique amphitheater was the one venue missing in Connecticut, Koplik said.

The city owns and operates the 5,700-capacity venue, which underwent a $30 million renovation to convert it to a music venue. The cost includes installation of a new roof made of the same material used at NFL stadiums.

Live Nation Connecticut programs the new facility after partnering with Howard Saffan, former president of Webster Bank Arena, situated next door to the amphitheater, to develop it.

The venue features the Jim Koplik Room, showcasing memorabilia he has collected over the years.

“As these classic rock artists that built our business are getting older, they have to step down from bigger amphitheaters to smaller venues,” Koplik said. “They’re gold mines.”

Their vision is to book up to 30 concerts annually in addition to special events such as the Holiday Lights Spectacular, a drive-through show in the amphitheater parking lot. The event was set to run Nov. 18-Jan. 2.