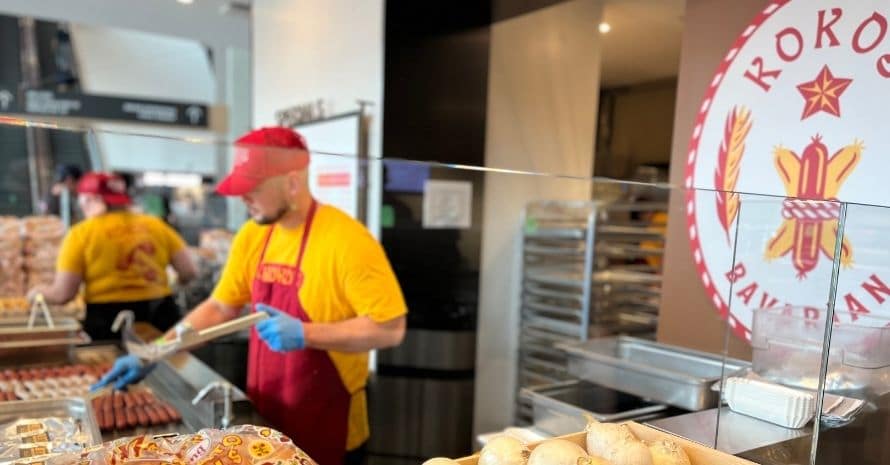 Those were the first events officially run by OVG Hospitality after the merger between Oak View Group and Spectra was completed in December, said Satenspiel, the food service group’s senior vice president of the west region. (OVG owns VenuesNow).

“It was a phenomenal week,” he said. “Any time you open a building of that magnitude, I don’t care who you are, it’s a challenge. We had a great local team assembled and brought in more than 40 support managers from all over the country. Are there some things we can work on? Yes. Each day that we had another show, we tackled what we knew we could fix and got better.”

The biggest issues to resolve in Austin are tied to staffing and timing for when workers should arrive at the arena, which depends on patron traffic flow. The focus is on getting part-timers familiar with the marketplace grab-and-go concepts and the self-checkout point-of-sale systems, Satenspiel said.

OVG Hospitality will study sales trends over the next four to six weeks to develop the right mix of products, especially beer selections, considering the 30 concerts currently booked at Moody Center through October. If there’s low demand for one particular brand of suds, officials will swap it out for a different flavor to see if it gains traction, he said.

“It’s about discovery,” Satenspiel said. “Each day presents different issues and we’ve got to figure out the solutions and make sure everything we’re offering is (in demand).”

Overall, adult beverages largely drove the sales numbers, which is typical for concerts

“In an arena, you usually deal with a sports team and this is more of a concert venue, so the sales mix was different than a basketball or hockey game, and we were essentially 80-20 ‘wet to dry,’” Satenspiel said. “We put more emphasis on beverages, which makes the operation a little simpler.”

Electric Jellyfish IPA, a popular Austin craft beer that’s developed a cult following in town and is served at the Koko’s stand, was a hit despite the hefty $18 price point. It’s tough to keep in stock due to high demand across Austin. OVG Hospitality initially requested 100 cases of Electric Jellyfish but could only get 20 cases, Satenspiel said.

“The high price is because of the cost (to us) to buy it,” he said. “It has nothing to do with what you’re paying in rent or anything like that. All other venues in town that sell Jellyfish have the same price; at some concert venues, it’s actually a higher price.”

(This fall, concession prices could potentially decrease for UT men’s and women’s basketball games, to fall in line with other sports venues on campus. OVG Hospitality is working with UT officials on fan-friendly pricing, but nothing has been confirmed, OVG officials said.)

The additional manpower was needed due to a busy weekend on the UT campus that extended to the Longhorns’ spring football game, a men’s club soccer match and multiple performances of The Lion King musical at Bass Concert Hall. All of those events took place April 23, the same day as Bon Jovi.

“We wanted to ensure that all levels of service at Moody Center did not suffer because we were all sharing staff (many of which are students) with the other venues,” Satenspiel said.

“We couldn’t have asked for a better opening,” he said. “We put a lot of blood, sweat and tears into this building. Was there a little extra motivation? Absolutely. It’s like anything else; it’s a brand new relationship and we’ve got to prove we’re the right fit and we did that.”

This week is just as active at Moody Center. Justin Bieber was booked for Wednesday (April 27), followed by the official grand opening celebration with two George Strait shows (April 29-30).

“We’ll continue to tweak things and I’ll be living here for another month and a half,” said Satenspiel, whose work base is in Scottsdale, Arizona. “I’m the orchestra leader to make us bigger and better.”