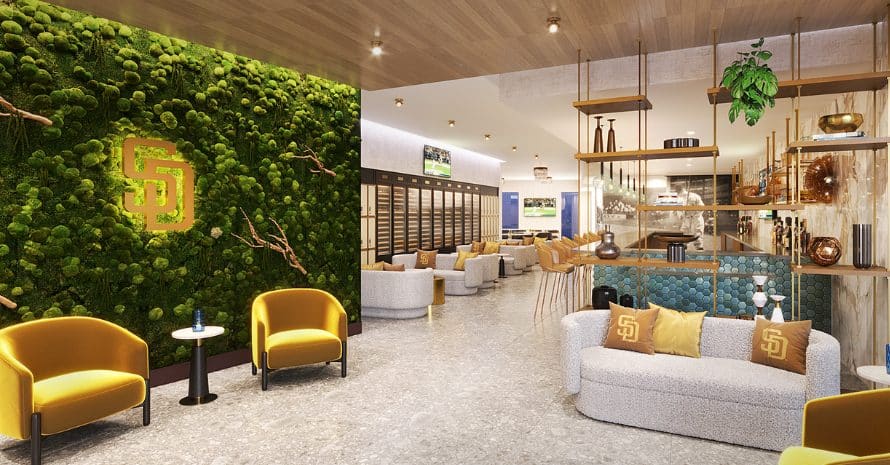 GREEN PARK: The living wall at the entrance to the upper level of the Blue Shield Home Plate Club, shown in a rendering, is a centerpiece of renovations to the premium space at Petco Park. (Courtesy team)

The San Diego Padres, capitalizing on the team’s return to prominence on the field in Major League Baseball, are revamping their home plate club for the 2023 season, the most exclusive premium space at Petco Park.

The Padres invested about $7 million to upgrade the Blue Shield Home Plate Club, an all-inclusive ticket package tied to a few hundred seats directly behind home plate between the dugouts, said Josh Momberg, the team’s vice president of hospitality.

It’s the first time the 5,400-square-foot two-level club has been renovated since Petco Park opened in 2004, Momberg said. For the 2023 season, the home plate club is sold out, according to the Padres’ website.

The improvements coincide with the Padres signing Delaware North Sportservice to a 10-year contract extension, effective through the 2036 season, the team announced on Jan. 9. Sportservice, Petco Park’s food and retail provider since it opened in 2004, had a record year in San Diego in 2022, company officials confirmed.  The contract renewal extends to a 50-50 partnership between the concessionaire and the MLB team for sharing the cost to fund improvements for concessions, premium dining and merchandise spaces inside the stadium, said Dan Butler, Sportservice’s on-site general manager.

The Padres paid for upgrading the Blue Shield Home Plate Club on their own, Momberg said.

Local architect Carrier Johnson + Culture designed the space and Shawmut Design and Construction was the builder. Team officials held focus groups with club seat holders to get feedback on how the layout and service could be improved to better suit their needs two decades after Petco Park debuted.

“The overarching theme was to provide an elegant, high-end experience for the VIP clientele that occupies the club with a food service element that matches that elevated theme,” Momberg said.

Last year, the upper level, a sit-down restaurant, was renovated with new windows providing views to the batting cage and that remains unchanged for the 2023 season. Plated service will resume with a redesign of new wall treatments, light fixtures and banquette seating.

The centerpiece is a living wall with green vegetation at the entrance to the home plate club on the upper level. It serves as a design element but also speaks to sustainability, which is important to the Padres and southern California overall, Momberg said.

In addition, circulation in the club between the two levels has been improved with a new stairwell connection. Previously, club patrons had to walk through “more of a back-of-house ramp and now that’s all gone,” he said.

For the 2022 season, the Padres finished fifth in MLB attendance, drawing just short of 3 million fans, among the highest total in the team’s 53-year history. For Sportservice, those numbers drove record revenue, plus the Padres are now the only big league team in town after the NFL Chargers moved to Los Angeles, Butler said.

“The community has rallied around that,” he said.

It helps that Petco Park, through Sportservice’s operation, has earned a reputation for high quality food and innovative design concepts, recognized by both the consumer press and trades for having some of the best concessions and local flavors in baseball. 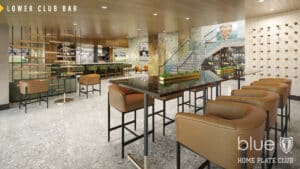 Hodad’s, for example, an iconic San Diego brand, had record sales in 2022 across its four stands at the ballpark. Revenue was up 25% over the previous year, Butler said, given that the 2021 season started with restricted attendance due to the pandemic.

In San Diego, Sportservice was among the first vendors to run grab-and-go locations at an MLB venue when Seaside Market debuted in 2014 and now has multiple mini-marts on the main concourse. It’s named after a local brand, selling flatbreads, tri-tip, salads, fresh fruit and craft beers.

Seaside Market remains among the top three-selling concepts at the stadium, Butler said.

Last season, Sportservice converted some portable carts to grab-and-go with a cooler of beer and soda, as well as hot dogs, that have worked well for quicker transactions, and will expand those setups in 2023.

“We had the most success setting those up directly across from our traditional concession stands,” Butler said. “If someone wants a hot dog and a beer, they can hit that portable, while people that want ice cream, nachos and pretzels would stand in a line that’s a little bit longer.”

On the technology front, last season Sportservice installed Zippin’s checkout-free system at one stand and is looking to expand with more locations in 2023. In addition, fans can use the Beer Me mobile ordering application within the MLB At the Ballpark app for in-seat delivery for alcoholic beverages. Tapin2 is part of the Beer Me system.

Overall, mobile ordering at Petco Park remains a tiny percentage of transactions, a trend that hasn’t gained much traction coming out of the pandemic, according to teams and their food providers. In San Diego, the bulk of transactions still occur at traditional stands, Butler said.

“The variety of food that we offer at our venues is significant and people like to shop and see what’s available and they’re OK leaving their seats for a bit to find a particular food item they might be seeking out,” said Shawn Mattox, Sportservice’s vice president of operations. “Our partners have always done a great job, whether it’s through technology or TV, to keep the connection with what’s happening on the field while people shop.”

On the retail side, Sportservice is in the early stages of improving traffic flow at the team store on the ground floor of the Western Metals Building, a 114-year-old structure in left field that was incorporated into the original ballpark design. The team store is another part of Petco Park that hasn’t really been touched over the past 20 years, Momberg said.

The upcoming remodel, a two-year project starting this season, should help resolve long wait times in terms of the sheer number of people making transactions in the team store, Butler said. The challenge is to make those adjustments without touching the exterior doors and walls protected under historic landmark status.

Any changes to the interior must be approved by the city and the exterior is hand-off, he said.

“There are ways we can continue to provide softer elements in the team store to give it a modern touch while being respectful of the history and how it can be incorporated organically without taking away from it,” Momberg said. “Our intention is to breathe some new life into it to make it as nice as the rest of the ballpark.”