Palm scanners have some up in arms 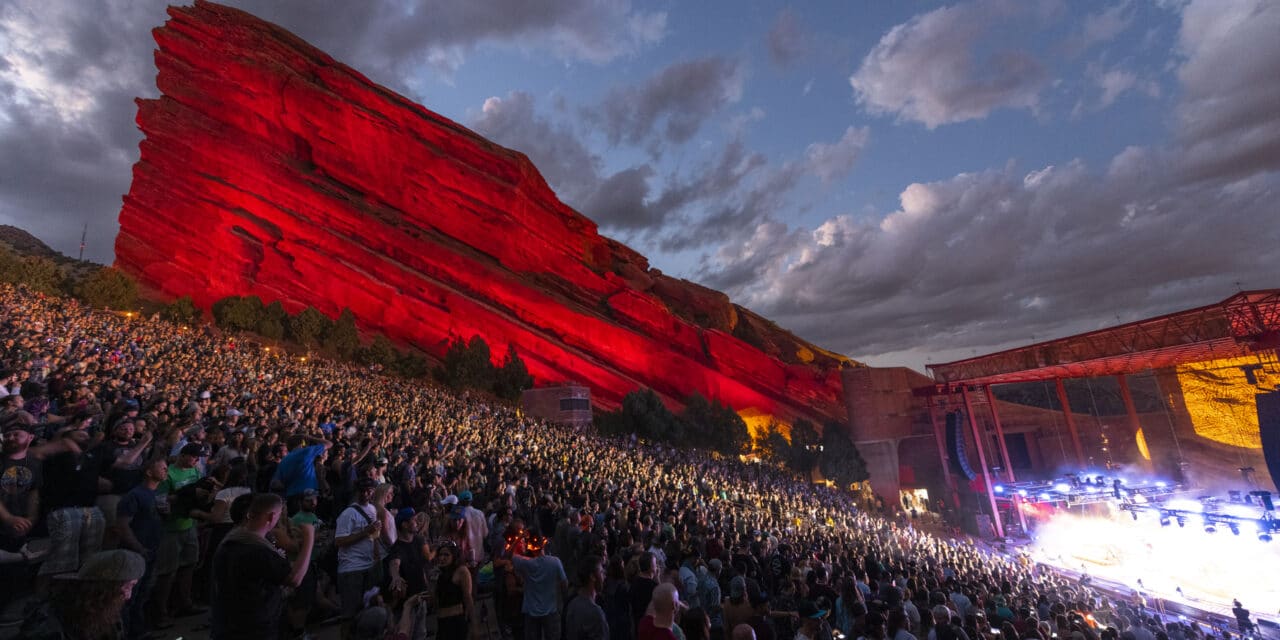 Biometric scans can speed entry into venues such as the iconic Red Rocks Amphitheatre, but not everyone is happy about the technology’s expansion into live entertainment. (Courtesy Visit Denver)

Activists say biometric ID is a “coercion of convenience”

Amazon has made a splash at sports and entertainment venues with its Just Walk Out frictionless retail outlets, but the use of its palm scanning technology at Red Rocks Amphitheatre has garnered backlash from activists and artists concerned about the privacy and surveillance implications.

More than 200 artists, including Tom Morello of Rage Against the Machine, Kathleen Hanna of Bikini Kill and Sean Ono Lennon, along with more than two dozen organizations, have signed on to a letter urging ticketing outfit Axs and its parent company AEG Worldwide to abandon the use of Amazon One palm scanning at the Morrison, Colorado facility.

Red Rocks, about 20 miles southwest of Denver and owned by that city, activated the technology in September, tied to its digital ticketing system for access to the amphitheater. Registered patrons scan their palm in lieu of a ticket bar code at a designated entry point.

In October, Amazon One debuted at new NHL arenas in Seattle and New York as part of Delaware North Sportservice’s concessions operation.

Leila Nashashibi, a campaigner for Fight for the Future, the advocacy group spearheading the effort to eliminate Amazon One at entertainment facilities, said the group is concerned about sensitive data being collected and stored in the Cloud.

It’s a threat that many consumers may brush off for the sake of convenience.

But according to Nashashibi, the convenience aspect is oversold when compared to the danger of government, law enforcement and hackers accessing data and using it for their own purposes.

“The added benefit and convenience is incredibly marginal,” she said. “The difference between scanning your palm and pulling and scanning a ticket is like trying to fix a problem that doesn’t exist.”

Those who use the technology to bypass lines may beg to differ, but Nashashibi says that even when the benefit is “more than just marginal, we have to think about these are strategies of tech companies to get people to sign up for a product and submit their most sensitive personal information while getting very little information about the potential risks of doing that.”

Clear, another company that uses biometrics to identify registered users and speed them through queues, has a presence at a number of venues and airports and has also launched Health Pass, a vaccination and COVID test results verification service. The company offered the following statement:

“Clear is officially recognized by cities like New York, San Francisco, Los Angeles and Seattle as a seamless way for people to safely access those things they love. We are committed to helping businesses from large (the Los Angeles Raiders) to small (local independent restaurants) keep their workers and patrons safe and their doors open. Clear is a secure way for businesses to confirm proof of vaccination.”

The fact that Amazon One is an opt-in platform doesn’t allay the concerns of Fight for the Future.

“This is incredibly problematic technology and the fact that it’s opt-in is not enough in terms of protecting against the potential dangers. It has to do with broader concerns about biometric data collection tools,” Nashashibi said.

“We really have to think about this phenomenon that some experts are calling the ‘coercion of convenience,’” she said. “Even just the perception of the added convenience can be enough to get thousands of people to sign up to this technology with no information about the risks.”

The “coercion of convenience” is really about “manipulating people and getting them to hand over their precious personal data,” she said. “We need detailed information about the risks of biometric data collection tools like palm scanning and that needs to be widespread. Red Rocks and anyone using these tools has a responsibility to educate people on the potential risks.”

A spokeswoman for AEG, which also promotes concerts at Red Rocks, declined to comment.

Amazon One is in use at four concession locations at Climate Pledge Arena, privately developed by VenuesNow parent company Oak View Group. In Seattle, the palm scanner is one option of payment apart from inserting a credit card to enter those marketplace-style destinations.

For the palm scan option, it takes about one minute to register and link one’s palm to a credit or debit card or account. Once someone enters their credit card account information and scans their palm into the system, guests need only hold their hand over an entry pedestal or payment scanner.

“I don’t feel like we coerce people in any way,” said Todd Humphrey, senior vice president of digital and fan experience for the Seattle Kraken hockey club, which calls Climate Pledge Arena home. “From a time perspective I don’t think they save that much; it’s really just the convenience of not having to reach into your pocket. We’re really clear with people: there are two very distinct ways to pay and we give people the choice.”

Having hosted nearly two dozen events since Climate Pledge Arena opened about five weeks ago, there have been zero complaints from anyone about being coerced or asked to enter their information, Humphrey said.

For years now, teams and venues have drilled deeper with data analytics to find out who’s coming into their buildings to both customize their experience and generate greater revenue by targeting them with offers, whether it’s seat upgrades or discounts on concessions and merchandise. Amazon One provides them with another data point for identifying their fans’ needs and interests. 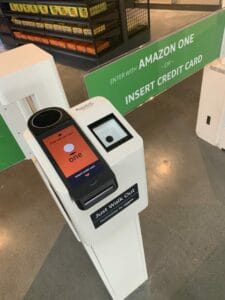 An Amazon One palm reader stands outside a Just Walk Out market at Climate Pledge Arena. (Don Muret/Staff)

“We would love to know, for a variety of reasons and certainly not to invade anybody’s privacy, but to deliver a better, safer and more secure experience,” Humphrey said. “It would be super helpful to know who is coming in and out of our building. We’re probably a ways away from that but Amazon One has made it clear that this is a choice for their own convenience.”

Humphrey said the Kraken and OVG are pleased with Amazon, a partner on multiple levels.

“Our confidence level with them is extraordinarily high,” he said. “From a security perspective, I don’t think you could find a more secure company in the world than Amazon.”

“The claims made by (Fight for the Future) are inaccurate. Amazon One is not a facial recognition technology — it is an optional technology designed to make daily activities faster and easier for customers, and users who choose to participate must make an intentional gesture with their palm to use the service. We understand that how we protect customer data is important to customers — this is very important to us too, and that’s why safeguarding customer privacy is a foundational design principle for Amazon One. Amazon One devices are protected by multiple security controls, and palm images are never stored on the Amazon One device. Rather, the images are encrypted and sent to a highly secure area we custom-built for Amazon One in the cloud where we create your palm signature.”

In September, Blaine Legere, Axs senior vice president of strategy, told the Denver Business Journal that when Amazon approached them with a palm scan payment concept more than two years ago, the ticketing provider saw its potential for greater ease in accessing venues. Amazon One, which launched in retail stores last year, was first used at Red Rocks on Sept. 14 for an Alison Wonderland concert, Legere told the Journal.

The Amazon stanchions used at Red Rocks can scan a digital ticket and read a registered guest’s palm.

Fight for the Future has attempted to open a dialogue with AEG but had not received a response, Nashashibi said.

Similar technology is widespread in other industries.

License plate readers are widely used by law enforcement and at highway toll booths, as well as cameras and facial recognition software deployed at mass transit terminals. As a result, some would say the cat is out of the bag on biometric technology.

“It is absolutely worth fighting and there has been a lot of success against the spread of biometric surveillance tools,” Nashashibi said. “About 20 cities across the country (including Portland, Oregon) have passed legislation primarily focused on banning law enforcement use of facial recognition. It’s something elected officials are taking up and concerned about.”

Humphrey acknowledged that some people will push back against new technology. He said his mother who is in her late 70s, was fearful 10 years ago of entering her credit card information on the Internet.

“Now, most of her shopping is done online,” he said. “The reality is digital technology is here, and some organizations, like we are, embrace it wholeheartedly. Other organizations are a little slower off the mark. We’re big believers that it drives a better fan experience and what we’re hearing from our fans is that it speeds everything up, it makes it more vibrant and they go home happier.”