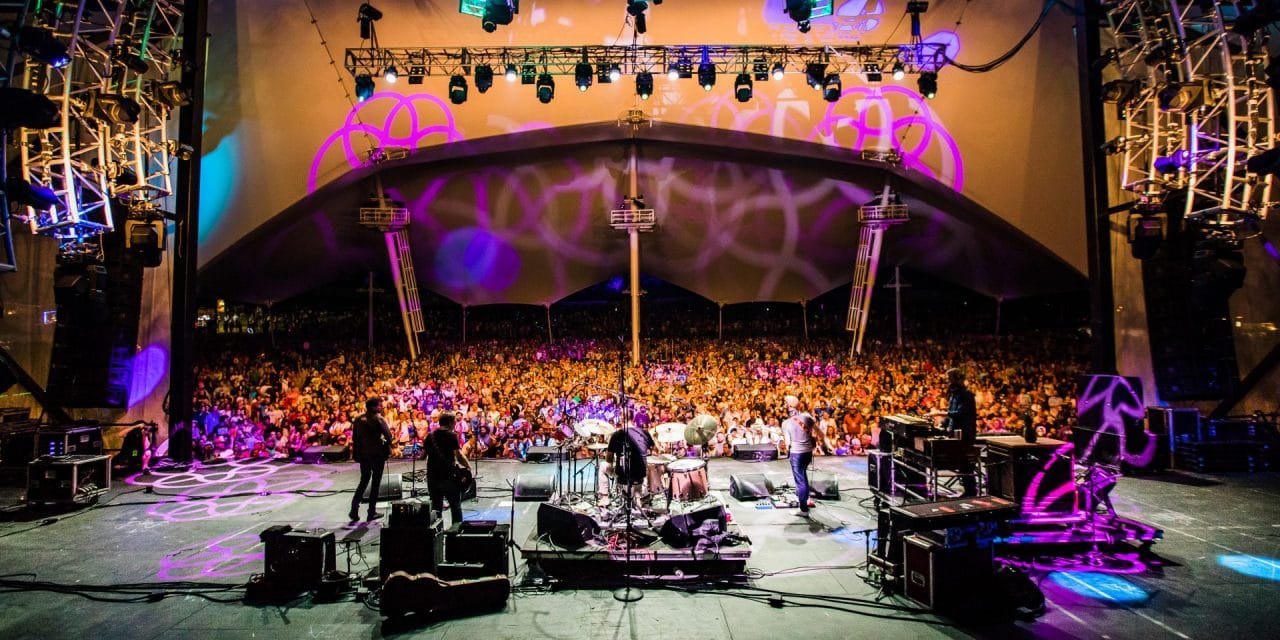 Joe Russo’s Almost Dead, shown here performing at the 2019 Peach Music Festival, is among the headliners for this year’s event. (Jesse Faatz Photography).

The Peach Music Festival is officially back after a one-year hiatus due to the pandemic. The ode to the Allman Brothers Band has a lineup mostly intact from before the 2020 event was postponed with new managers under Live Nation, co-producer of the event with ABB manager Bert Holman.

The lineup and dates were confirmed Friday. It will take place July 1-4 at Montage Mountain, a ski resort outside Scranton, Pennsylvania, the event’s home since it started in 2012.

Two special attractions will pay tribute to landmark albums from the past 50 years.

Turkuaz, with guests Jerry Harrison of The Talking Heads and Adrian Belew, the guitarist who played with the Heads on tour during their heyday in the late 1970s and early 1980s, will perform Remain in Light in its entirety at Peach Fest. The Talking Heads album was released in 1980.

In addition, another festival highlight will be a performance of the Allman brothers’ classic record, “Live at Fillmore East,” celebrating that concert’s 50th anniversary that occurred on July 1, 1971. The album is considered to be one of rock’s finest live recordings.

Allman Brothers alumni booked at the festival include founding member and drummer Jaimoe, bassist Oteil Burbridge and guitarist Warren Haynes. He is tentatively scheduled to perform a solo acoustic set, according to Holman.

“We put a ‘square’ in the lineup for Warren and tell him, ‘you figure out what you want to do,” Holman said. “He’s so creative. It won’t be Gov’t Mule (as a band). For him, it’s a two-and-a-half hour drive from home (in Westchester County, New York). He can afford to do a one-off.”

The entire lineup is listed at http://thepeachmusicfestival.com.

As it stands now, Peach Fest will be among the first music festivals taking place this summer and ticket sales are going well, Holman said. As of mid-May, the count was approaching 10,000, he said, which represents half the event’s typical capacity.

In Pennsylvania, the elimination of all COVID-19 restrictions is expected to take effect by Memorial Day weekend, local news outlets reported this week, clearing the way for Peach Fest to operate at 100 percent capacity.

“We never took (Peach Fest) off sale,” Holman said. “There was a period of time where we offered refunds to anybody who wanted them. That refund window closed, which was part of the overall Live Nation policy. Everybody else’s tickets were retained.”

He said, “We continue to sell 100 tickets a week, much to our pleasure. Our headliners have all stayed intact. A few (acts) have bowed out, which we’re fine with. We’re not mad at anybody. Everyone is going to make their own decisions as to what works for them.”

Holman said Jon Hampton, a senior vice president for Live Nation based in Philadelphia, is now in charge of Peach Fest after former Live Nation executive Dave Niedbalski left the company in December. Niedbalski ran the festival since its inception nine years ago.