Point of no return with cashless technology 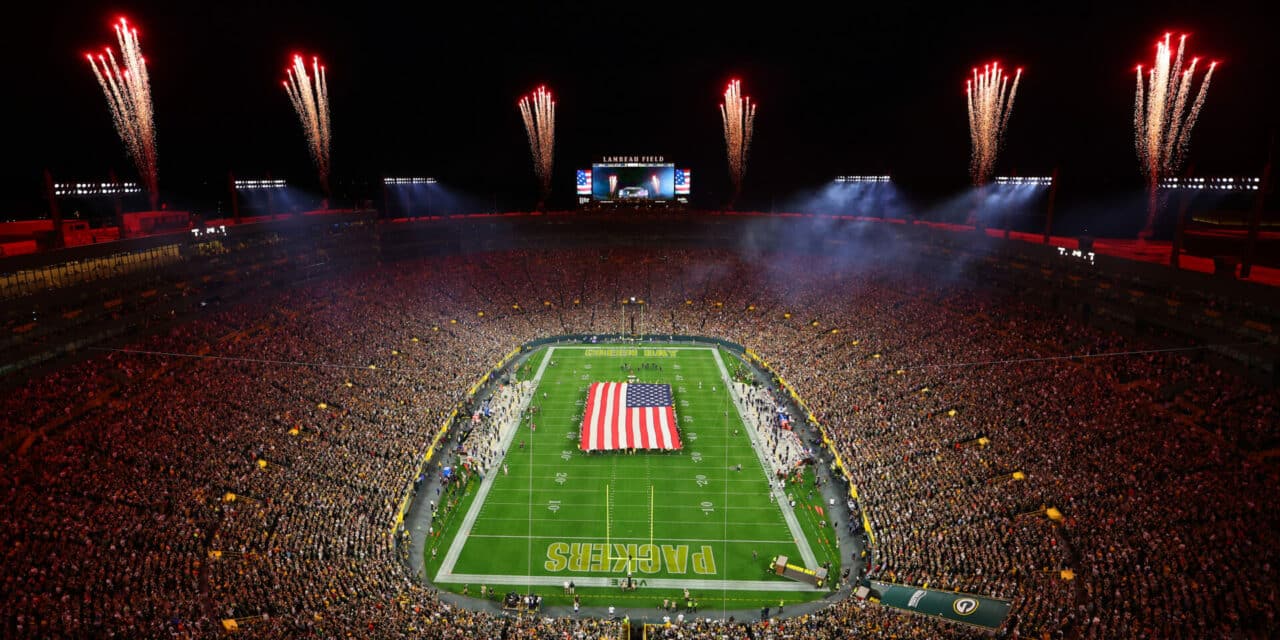 TO THE POINT: The payment processor at Lambeau Field had a glitch that billed duplicate charges to customers’ credit cards during the Chicago Bears-Green Bay Packers game on Sept. 18. (Getty Images).

The technical glitches tied to point-of-sale systems occurring with greater frequency at sports events and concerts have the Atlanta Braves on high alert at Truist Park.

The Braves are upgrading their stadium’s point-of-sale system in conjunction with Delaware North Sportservice, their food provider. A decision is expected soon with a new system in place for the 2023 season, said Derek Schiller, the Braves’ president and CEO.

“We’ve been watching those issues closely,” Schiller said. “We’ll have close to $100 million in revenue flow through those systems for food and retail this year. Historically, those types of things and how we operate them were largely pushed to our vendors and have been their responsibility. Now, we’re taking those things on ourselves and owning those decisions at the team level.”

In that respect, the Braves aren’t alone as all teams want access to that valuable sales data and analyze it to help them get a better idea of who their customers are and their buying habits to generate additional revenue.

That’s all well and good, but the technology still has to work.

Over the past year, as arenas and stadiums reopened for business after the COVID shutdown and the move to cashless operations accelerated, there have been multiple reports of POS malfunctions causing the processors to shut down completely.

On Aug.27, it happened with Levy U.K. during the Nebraska-Notre Dame college football game at Aviva Stadium in Dublin, Ireland. The POS system, using SumUp as the payment processor, went down for two hours at the event, resulting in free distribution of food and drink before the system came back up.

In other cases, customers have been overcharged when purchasing food and drink, such as Lambeau Field during an NFL game and SeatGeek Stadium during the Sacred Rose music festival in Bridgeview, Illinois, a Chicago suburb. Sportservice runs the food at Lambeau, where the snafus occurred with FreedomPay, among the leading payment processors across the retail landscape. OVG Hospitality runs the food at SeatGeek Stadium.

Industry-wide, the issue with shutdowns and over charges revolves around the credit card processors connected to the POS equipment, according to teams, vendors and consultants.

“This is less about cashless and making sure you have a point-of-sale system that can automatically function in offline mode, which should be seamless and have no impact on processing over the counter transactions,” said consultant Mike Plutino, founder and CEO of Food Service Matters. “While offline mode marginally increases the risk of declined credit cards, it should not impact speed of service. The double charging is a separate issue that’s challenging but would not have an impact on the sale of food and beverage during an event.”

Offline mode refers to a backup system integrated into POS equipment that retains sales data in case the payment processor malfunctions. The challenge is when the processor goes down, typically through a loss of internet connectivity, the POS system loses the ability to store that information in the Cloud, said Jim Dalton, president of Food Service Matters.

Years ago, before advances in POS technology, credit card data was stored in a software server room tied to the POS hardware. Credit card information would go to a server, transmitted to get the approvals and come back to the server and to the POS system. Now, as the technology becomes more robust, concessions transactions produce a much great stream of information on the sale and product inventory, Dalton said.

“We have more data going out into the Cloud and that’s why we’re more susceptible than we’ve ever been,” he said. “But that technology gives us the information we require. Clients (the teams) want to own the data.”

Plutino said part of the issue is the recent trend with payment processors acquiring POS firms, which has resulted in the focus switching to processing transactions over having a proven, reliable system customized to a client’s needs. It extends to sponsorship dollars now driving the decision for selecting POS technology, Plutino said, generated off of processing costs and not the hardware and software capabilities.

“Before, you were buying the hardware and software from a manufacturer,” Dalton said. “Now, with the processors (owning POS firms), they want the one-stop stop. Not only do they have a vehicle to process food and beverage, but they want your ticketing, parking and merchandise. When you put all that together, it’s a significant sum. Because of that, they’re able to provide discounted equipment and sponsorships if you make the change to use them.” 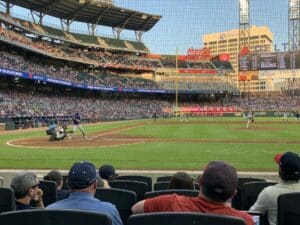 TRUST THE PROCESS: The Atlanta Braves are taking a greater role in selecting a new point-of-sale system at Truist Park. (Don Muret/Staff)

In Atlanta, Sportservice currently uses legacy POS brand Micros for concessions. The Braves run merchandise in-house and use Retail Pro, but that equipment and system is becoming obsolete and will not be supported in the future, requiring a change, Schiller said.

Schiller would not comment on whether the Braves or Sportservice would pay for the new POS systems, but ideally, the Braves would prefer to have one platform in place to handle both food and retail, he said.

“There have been so many developments and new technology vendors that have come on in this space, it’s not surprising that you’re going to see these companies trying to buy market share,” he said. “It still has to work well with a proven partner that has some degree of scale. When we put together the RFP for this, we contemplated all of those things and whittled it down to only the vendors that can do all the functionality we want not just today, but into the future.”

The situation at Lambeau Field with overcharging fans at the Chicago Bears-Green Bay Packers game on Sept. 18 got a lot of play in the media, especially in Chicago after what happened at Sacred Rose in late August, when the system’s tip option malfunctioned, according to officials with Bridgeview, the stadium’s owner. At the festival, the  glitch resulted in fees of $1,000 to $5,000 billed to some customers’ credit cards, according to local reports.

In both instances, the payment processing firms worked around the clock to refund all overcharges for those affected by the glitches, said officials with Sportservice and OVG Hospitality.

Tom Olson, a vice president with Sportservice based in Milwaukee, Wisconsin, has been with the company for 43 years. Olson worked the Bears-Packers game two hours north in Green Bay and he said this was the first time he’s seen a glitch with duplicate charges on credit cards.

“We knew about it during the game, but didn’t know it would go on for a few days; that’s the issue,” Olson said. “We invested a lot of money with these systems to make it work. Unfortunately, you might have a hiccup here and there, but you get through it and move on.”

The double charges extended to Titletown, the Packers’ entertainment complex across the street from Lambeau Field, where Sportservice runs food at The Turn, a Topgolf facility, a skating rink and a snow tubing hill.

“Every (vendor) chooses their processor and if they have an issue on their side, it still becomes our problem,” Olson said. “It’s our building, our client, our guests and we have to fix all that because it’s a ripple effect on the operation. It’s not just Sportservice or Levy or whoever. The grocery store down the street had the same problem.”

Lambeau Field went cashless in 2020 during the height of the pandemic. This past offseason, Sportservice installed 850 new Oracle Micros Sim2 work stations at the stadium, said company spokesman Charlie Roberts.

“We’ve all gone away from cash,” Olson said. “When we took cash, we still had problems.”

Vendors say workers miscounting currency and employee theft are among the issues dealing with cash transactions.

Sometimes, it’s just a matter of ‘be careful what you wish for’ in terms of relying on cashless technology and the information autobahn to improve business and increase the bottom line.

Olson and other food service veterans remember the days of “crash boxes,” that concessionaires had as a backup plan with pencils and notepads and calculators to record sales in the event of a technology shutdown.

“We’re hoping we don’t have to resort to that, but if we need to have 50 tackle boxes sitting in the storeroom at each of our facilities and drop them off at each location to do business, we’ll do it,” Olson said.

Editor’s Note: This story has been revised since it was posted.