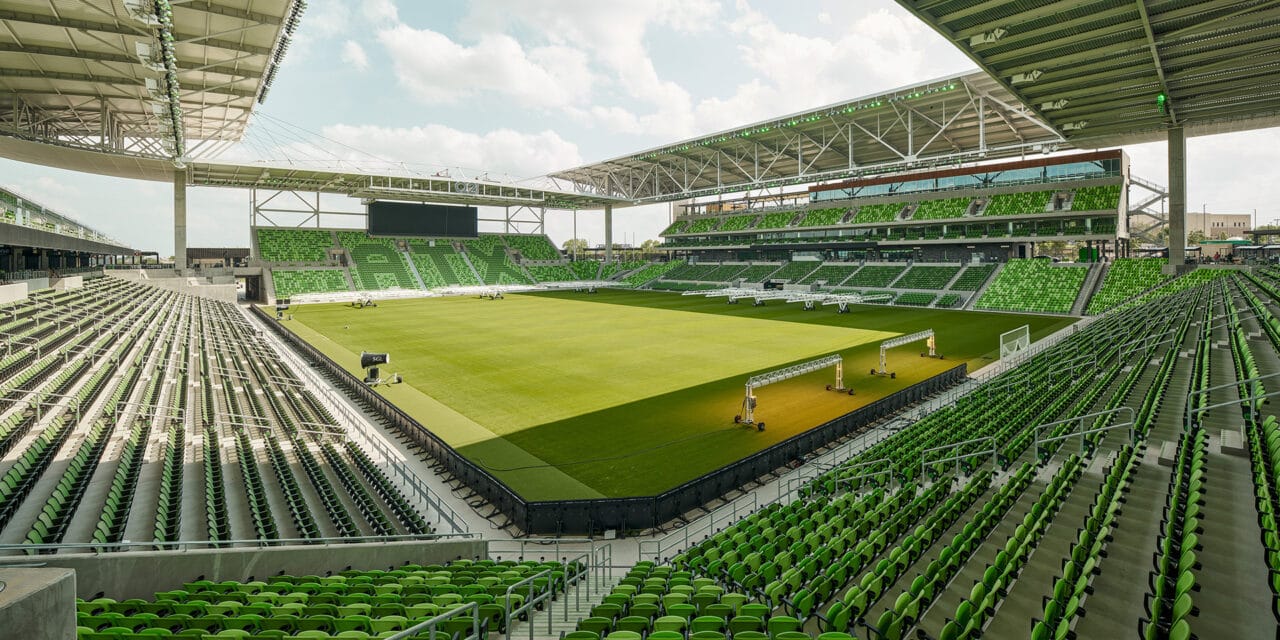 “Keep Austin Weird” is a slogan that folks in the capital of Texas wear on their sleeve, and the city’s thriving music scene, spread across a wide variety of concert venues, makes up a big part of that independent feel and culture.

Q2 Stadium, the new home of Major League Soccer’s Austin FC, is joining the mix of live music facilities in town. The $260 million stadium has multiple event spaces to set up small shows apart from the main seating bowl.

The U.S. women’s national soccer team opened the stadium with a 2-0 victory over Nigeria on Wednesday, and Austin FC will play its first game there Saturday.

Andy Loughnane, president of Austin FC, said the team envisions holding three to seven on-field concerts annually, pending the MLS schedule. The organization invested a significant amount of money for concert infrastructure, Loughnane said, although he did not specify how much.

A permanent concert stage sits underneath the 4,000-space supporters section on the south end, which stands among the biggest in MLS. The rigging capacity of 150,000 pounds can accommodate most major tours.

In addition, Austin FC invested in a multicolored LED sport lighting system produced by local firm Sportsbeams Lighting that can be used for concerts. It’s the first newly constructed stadium in the world to feature that product as a point of differentiation, Loughnane said.

“From day one, having a multifunctional stadium was part of our core design principles,” he said. “Austin is a live entertainment destination, and the city is accustomed to hosting large-scale events. We can be a perfect complement. It is a soccer stadium, but we want it to be active year round.” 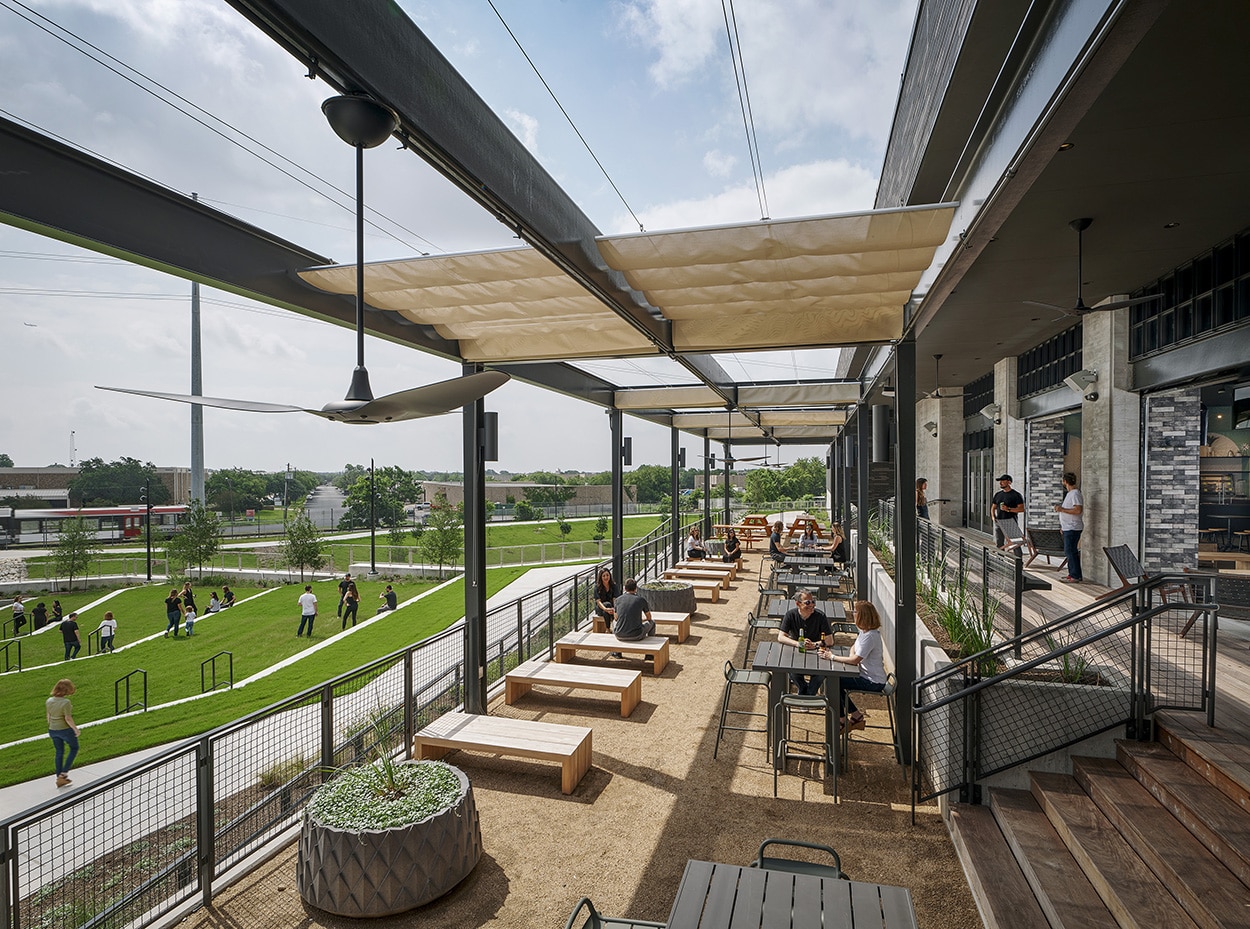 The Captain Morgan Club looks out on a 2,500-capacity amphitheater outside the stadium. (Ryan Gobuty / Gensler)

Several MLS stadiums play host to concerts on the field. Some of the league’s early soccer-specific venues such as SeatGeek Stadium in Bridgeview, Illinois, were built with concrete pads and rigging systems in the end zones to support live music productions.

Most recently, Banc of California Stadium, which opened in 2018 in Los Angeles, has booked festival-style shows on the field.

In Austin, Q2 Stadium takes the live music element to a higher level with added versatility for those productions.

The team, in conjunction with architect Gensler, general contractor Austin Commercial and owner’s representative CAA Icon, developed a 2,500-capacity amphitheater on the east side next to the stadium.

It’s a terraced lawn setting with six levels and is equipped with a stage, sound and lighting. Patrons can sit on those seat walls or bring their lawn chairs and blankets, said Jonathan Emmett, Gensler’s principal and design director.

The Captain Morgan Club on the east side, an indoor-outdoor space with capacity for 700, spills out to the back of the amphitheater, adding value for those club seat buyers in terms of the concert experience.

“It’s a venue within a venue,” Emmett said. “It’s all about scalability. The idea that you can bring a music event in here that’s playing to 300 people or 2,000 or 25,000 in the seating bowl is a very intentional piece of this project. It’s going to be one of those things that gives it an Austin feel.”

As it stands now, the amphitheater is a pretty basic setup, but it will evolve as Austin FC becomes more familiar with the space and its operations expand. There’s room to create a seated pavilion with greater production elements and back-of-house structure, Loughnane said.

Dan Vaillant, senior vice president of CAA Icon, the owner’s representative for Austin FC, has been involved with the Q2 Stadium project since late 2016. It’s his third MLS development, which extends to the expansion of BMO Field in Toronto and Nashville SC’s new stadium, opening in 2022. Austin FC’s ownership group stood out with its commitment to embrace all events, Vaillant said.

“A lot of these owners get into these buildings and don’t want to mess up the pitch by putting a concert in there,” he said. “They go in with grand plans and then hardly do any shows. This owner sees an opportunity to do concerts in Austin and they’re going to aggressively chase it by doing as many as they can. It’s definitely in their pro forma.”

The stadium’s roof canopy is a key piece for all events, including soccer, Vaillant said. The canopy covers all 20,500 seats, which is critical in the heat of Texas summers. That’s not the case for older MLS venues in Dallas and Houston, Emmett said.

“The upcost for doing that wasn’t as significant as if we had to build a canopy for concerts,” Vaillant said. “We were building it anyway. We added the rigging grid and retractable seats on the south end and the stage (underneath the stands), which helps with changeovers because you’re not pulling the stage off the pitch. All of that was done purposely so we can maximize events.”

The parking lot on the stadium’s north side can also be programmed for live music as secondary stages tied to a festival’s main stage in the seating bowl The parking lot is made up of grass pavers, which is a plastic grid system installed underneath the grass itself. It’s more durable than just laying sod down on its own over bare ground, Vaillant said.

For Austin FC, the festivals would fall into the small to midsize category compared with some MLS stadiums that have held rock festivals with up to 40,000 people, Loughnane said.

“We anticipate being in the festival business with the interior of the stadium built to accommodate headliner acts,” he said. “The parking lots can be used as part of the festival structure. We built an attractive (complex) for artists to consider not only for a first visit to Q2 Stadium, but make it much easier to have a return visit.”