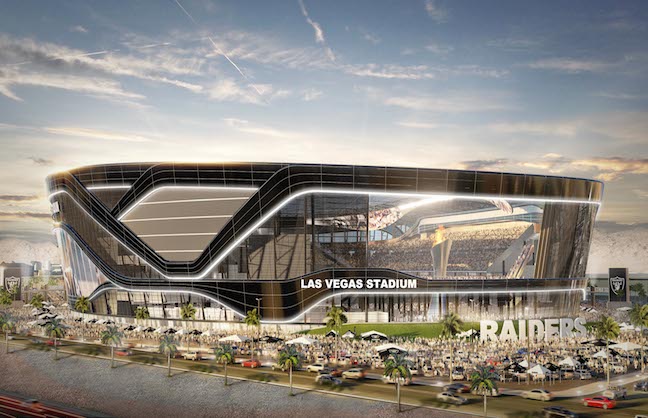 And Vegas rejoiced. After over a year of intense speculation, regulatory scrutiny and dashed dreams due to a fourth-quarter financing fumble, the National Football League (NFL) has approved the relocation of the Oakland Raiders to a shiny new $1.9-billion stadium in Las Vegas.

“This is unbelievable news for the city and something we have been working hard on for quite some time,” said Mike Newcomb, executive director, Sam Boyd Stadium, University of Las Vegas (UNLV) and a member of the Las Vegas Stadium Authority Board, which is the oversight organization in charge of the the project. “Being a member of the board is exciting and being able to be on the ground floor of the stadium development and how the facility will be managed is an exciting opportunity for all the board members.”

“This is a huge step forward both for the Raiders and our community,” said Jeremy Aguero, principal analyst and lead staff, Applied Analysis, the firm hired by the Southern Nevada Tourism Committee to study the possibilities of building a new sports stadium in Clark County, Nev., and enticing an NFL team to move to the desert city to play there.

“We have a substantial amount of work still to do in order to see the Raiders actually play in Las Vegas,” he added.

The NFL franchise owners met in Phoenix on Monday morning. After the votes were tallied, the vote stood at 31-1, with the Miami Dolphins being the sole 'no' vote. Dolphins' owner Stephen Ross released a statement on Monday saying, “we as a league owe it to the fans to do everything we can to stay in the communities that have supported us until all options have been exhausted,” explaining his decision to block the Raiders' move.

The Raiders are expected to play the next two seasons in Oakland, and possibly a third, before playing their first game in Las Vegas in 2020.

The effort to lure the NFL to Vegas began when Aguero drafted the first bill, Senate Bill One, that went to the Nevada legislature in October 2016. It called for an increase in the Clark County hotel room tax to fund $750 million in construction and infrastructure that would make up the state’s contribution to the in-the-works stadium.

The rest of the capital will come from the Raiders ($500 million) and Bank of America ($650 million). Las Vegas Sands casino magnate Sheldon Adelson was originally pegged to supply the last piece of the financing but pulled out late last year over concerns about how the eventual revenue would be split.

“At the point that Mr. Adelson stepped away from the deal and left a $650-million void, certainly the deal wasn’t going to be viable,” said Aguero. “Bank of America stepped in and made a deal viable again.”

The Raiders’ revenues from the new stadium is expected to be around $130 million and would come from broadcast rights, premium seating and suite sales, concessions, tickets, merchandise and stadium naming rights.

But the value to Las Vegas is much, much higher according to Pat Christenson, Las Vegas Events. “Estimates are $450 to $500 million a year to be added to the Las Vegas economy from the new stadium,” he said. “Public financing is always controversial. The way I look at it, we get a $1.9-billion stadium for $750 million and, with it, we get an NFL team that travels strongly.”

Christenson sees this as a perfect partnership. “The Raiders are the perfect team for Vegas,” he said. “The brand of the Raiders combined with the brand of Vegas make a superstar brand.”

Regional Raiders fans and local Raiders fans are expected to make up the fan base for the games, according to Christenson, and he expects that the people who come to visit “will spend a lot of money on a ticket or they can watch the game in one of the 40 to 50 casinos that will roll out the red carpet and create an experience every weekend for the football games.”

“This deal opens up infinite possibilities to secure events that we just couldn’t get before,” he said. “All the events that are now happening in Dallas, Los Angeles, San Francisco and New York we can attract now.”

“Many of the events we do get like Monster Jam World Finals; the Vegas Bowl; rugby; soccer and neutral-site college football have been restricted by a 30,000-capacity stadium, which we will now be able to grow. We can now get the Copa América Football Championship; The FIFA (Fédération Internationale de Football Association) World Cup, as well all the International Friendlies soccer matches; boxing; UFC (Ultimate Fighting Championship) and concerts.”

Christenson also thought that the new stadium could compete for the Final Four; the Pro Bowl; the draft, and, of course, the Super Bowl. “Just imagine a Super Bowl in Las Vegas,” he offered. “This will also help UNLV recruit and upgrade the types of teams they play.”

It is expected that the UNLV football team will play at the new stadium. “Part of the state legislation requires that Sam Boyd Stadium will stop hosting events when the new stadium opens so we are going to concentrate on all our great events we currently host and make them the best we can over the next three years,” said Newcomb.

The Stadium Authority Board has to complete its work by October, according to Senate Bill One, but can extend the deadline six months until April. “As of right now the goal is to have the stadium commence construction either very late this year or in the first quarter if 2018,” said Aguero.

An official location for the stadium has not been picked, but according to Aguero, most of the discussion by the Stadium Authority Board has focused on the so-called ‘Russell 62’ site, which is west of Mandalay Bay and across the I-15. Aguero believes the land is currently owned by “a consortium of banks” and that “ultimately the land has to be purchased by the developer of the stadium and it has to be transferred to the Stadium Authority Board.”

“I like the Russell 62 lot location, it’s a great spot” said Christenson. “It’s the perfect compromise. It’s close to where everything is and has decent access to the main part of the I-15 and the roads that head directly west.”

Aside from the Raiders and UNLV football the stadium is expected to host concerts; special events like the Las Vegas Sevens Rugby Tournament; corporate events and, possibly, a Major League Soccer team. “The Southern Nevada Tours and Infrastructure committee suggests that the stadium will host about 46 events every year,” said Aguero.

The legislation calls for the Stadium Authority Board to enter into an operating agreement with a ‘stadium events company’ to run the facility. “That could be the Raiders or a partner with the Raiders,” said Aguero. “Then the Raiders, or their partner, could hire a large operating company like SMG or AEG to run the building.”

The Stadium Authority Board will meet in April to begin deliberations around the important documents such as the development agreement, the lease agreement and the joint-use agreement between UNLV and the stadium events company.