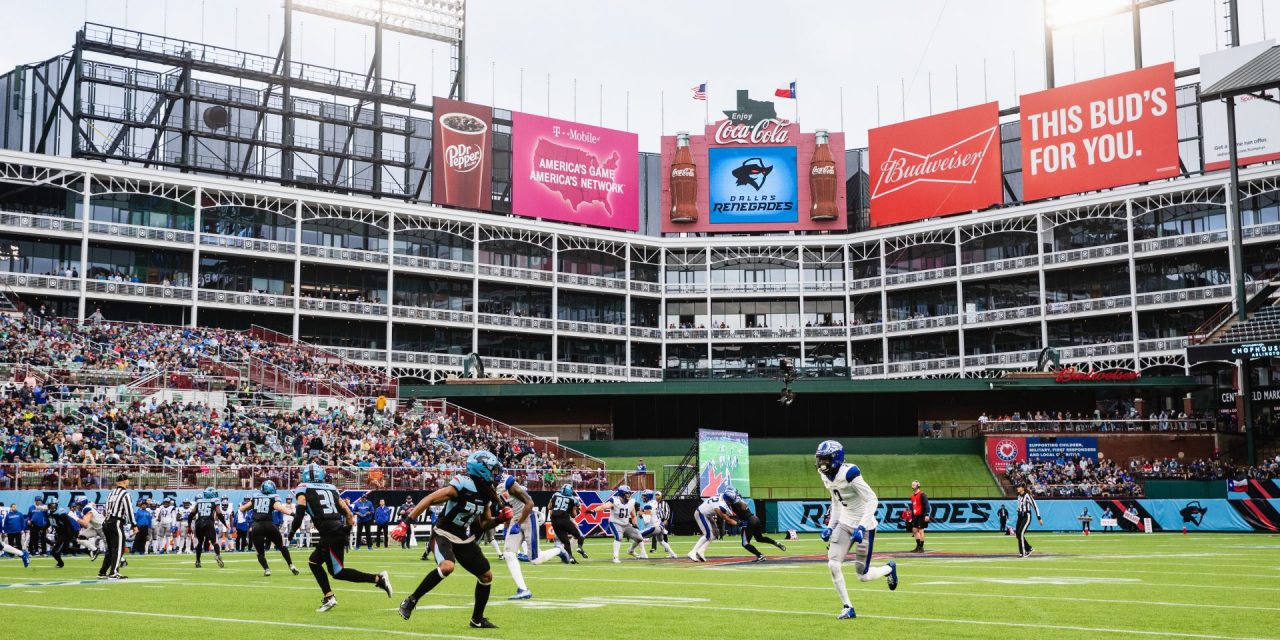 FOOTBALL IN THE PARK: The Dallas Renegades’ XFL opener at Globe Life Park on Feb. 9 was one of three home games they played before the season was canceled because of COVID-19. (Courtesy Texas Rangers)

XFL cancellation a blow, but soccer deal remains in place

Globe Life Park opened in 1994 and sits across the street from Globe Life Field, the team’s new $1.2 billion ballpark. The older venue was repurposed for the XFL Dallas Renegades and USL League One’s North Texas SC, which is affiliated with Major League Soccer’s FC Dallas.

The question over when both minor league teams resume play remains unanswered due to the pandemic.

On April 13, the XFL, owned by WWE Chairman Vince McMahon and Alpha Entertainment, filed for Chapter 11 bankruptcy protection. Three days earlier, the league announced that it had suspended operations.

The Renegades played three home games at Globe Life Park before the league canceled the remainder of the 2020 season in mid-March.

North Texas SC had 14 home games scheduled at Globe Life Park, but league officials delayed the start of the season over the pandemic. USL League One typically runs from late March through early October.

Rob Matwick, the Rangers’ executive vice president of business operations, said that North Texas SC’s deal remains in place and that the Rangers are working to fill the 2020 calendar with more events, pending resolution of the nationwide shutdown.

On April 16, the Rangers signed a deal with the Arlington Independent School District to host 14 high school football games this fall, pending resolution of the coronavirus situation. The games start Aug. 27 and end Nov. 5.

Globe Life Park will serve as the third football stadium for Arlington’s six traditional public high schools. It could potentially host high school football playoff games as well before the state championships are played down the street at AT&T Stadium, home of the Dallas Cowboys.

The Rangers also hope to book a football game between two historically black colleges at the older park, Matwick said.

To help operate both venues, the Rangers hired Mike Healy in January 2019, and he has since been promoted to senior vice president of venue operations and guest services. Healy worked 22 years for the Ilitch family in Detroit and managed Comerica Park, home of the Detroit Tigers, for 13 seasons. Healy and Matwick worked together in Detroit for 18 months when Matwick ran the Tigers’ media relations and, for a short while, ticketing.

In Arlington, as part of retrofitting the older stadium, the Rangers turned the old batting tunnels into auxiliary locker rooms for football. They removed the third-base dugout and put in temporary stands in the outfield to form a sideline on the building’s east side.

The Renegades used Globe Life Park as their practice facility. In addition, Team 9, which served as the XFL 40-man taxi squad, was based in Arlington and practiced at the old park, using the visitors clubhouse. The Rangers served lunch to both groups, Matwick said.

“When we landed the XFL, that was huge and we knew we had a shot at (scheduling) high school football,” he said. “We’ve talked about doing youth league baseball.”

Long term, the Rangers feel the older stadium can remain a viable facility. In January, Six Flags, which runs a theme park nearby, announced it’s moving its world headquarters to Globe Life Park after signing a 15-year deal to take over the 40,000-square-foot office building in center field. The agreement has two five-year options, Matwick said.

In the future, the older ballpark could potentially include residential units situated in a new office tower.

The Cordish Cos., the developer of Texas Live!, the entertainment complex between the two stadiums, has talked about building condominiums as part of expanding the property with a new 880-room hotel, a new convention center and a 1,500-space parking garage.

“It would be sort of like The Battery in Atlanta,” Matwick said. “It’s up to Cordish to deliver the anchor tenant, and we’ll get the tower done. We can preserve the (stadium) facade and build up.”