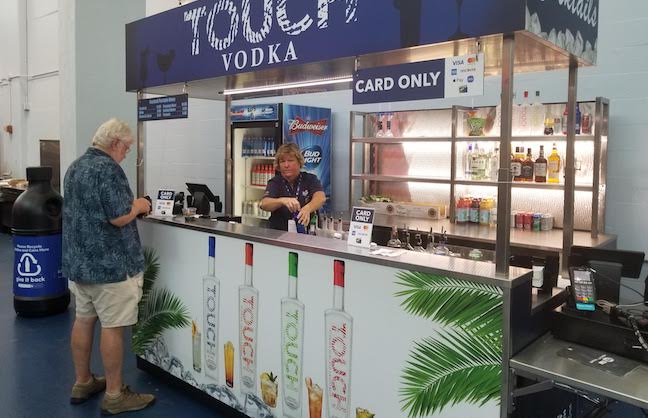 Experts agree that’s where industry is heading, but some say hard money still has a place

At Tropicana Field in St. Petersburg, the Rays’ home since their inaugural season in 1998, baseball fans must use credit or debit cards, the team’s affinity card, mobile technology such as Apple Pay or gift cards to pay for concessions and retail.

When fans buy gift cards with cash at merchandise stands and from team employees roaming the ballpark, it’s the only time currency is exchanged as part of the cashless program. The gift cards are available in all dollar values, said Bill Walsh, the team’s vice president of strategy and development.

It’s a bold move, considering that some industry experts feel teams and facilities should continue to offer cash as an option to pay for hot dogs, beer and baseball caps.

That’s especially true of Florida, where people 65 and older, who are accustomed to making cash payments as part of everyday life, make up about 20 percent of the population, according to the most recent Census Bureau figures. The state leads the U.S. in that regard.

“You have to offer a choice,” said food consultant Chris Bigelow. “Society in general is moving to cashless. It’s going to happen naturally, but I don’t think you can force it.”

Cashless in sports is nothing new. Teams have used cashless systems for over 20 years as credit card use increases across North America. In 1997, for example, the Chicago White Sox introduced a collectible stored value card for their first interleague series against the Chicago Cubs at New Comiskey Park, now Guaranteed Rate Field.

In the minor leagues, the Wichita Wingnuts ran an all-cashless operation for food and drink using gift cards at 6,000-seat Lawrence-Dumont Stadium. The system launched in 2008, but five years later the Wingnuts began accepting cash again after the tech vendor’s deal expired.

More recently, several MLB teams and their concessionaires have tested self-serve kiosks that accept only credit and debit cards, including the Houston Astros, Cincinnati Reds and Los Angeles Dodgers.

National statistics support the cashless trend. A Gallup Poll in 2016 reported 10 percent of all Americans use cash for all transactions, down from 19 percent in 2011. Still, plenty of holdouts remain among the “cash is king” crowd, facility managers said.

“There are more credit cards being used today than ever before,” said Jimmie Sacco, vice president of stadium operations and management at Heinz Field, home of the Pittsburgh Steelers. “But it’s like pay phones. Do you take them out or leave them in place, because not everybody has a cell phone.”

Down the street in the Steel City, the Pirates and their food vendor, Aramark, are expanding self-serve kiosks for this season to a grab-and-go beverage stand behind home plate on the main concourse at PNC Park. Over the past two years, Aramark tested self-serve on the premium level and sales increased for those using credit/debit cards, said Dennis DaPra, the ballpark’s senior vice president and general manager.

“We’re still not at the point where we’re going to go completely cashless over the next few years,” DaPra said. “Our market is still largely cash. It piques our interest, but it’s something where we certainly want to walk before we start running with it.”

To this point, nobody has gone all-in on cashless until the Rays announced in late January that they will take the plunge this season. Team officials feel the time is right after testing multiple cashless systems over the past year in with Levy, their food and retail provider.

“We did a lot of testing,” Walsh said. “It was not a spur-of-the-moment thing. We leaned on Levy and E15 (its data analytics group). They’re well-traveled in this space and brought a lot of great case studies and ideas for us to roll out last season, which we did.”

For the Rays and most teams, the effort is driven by speed of service, Walsh said. It helps reduce lines at concession stands, which is typically among the top complaints in fan surveys. It also reduces employee theft, according to teams and vendors.

On the data side, the digital technology enables teams and concessionaires to gain more information about their customers to improve their experience and generate incremental revenue through upsells and promotions.

Last year at Tropicana Field, the Rays converted half the lower bowl to a cash-free zone as part of the test. The team launched its gift card exchange program on the main concourse for fans that carry only cash. In turn, they could use the gift cards to buy food and retail.

“That part of the test was very interesting,” Walsh said. “What we saw in the pilot was a real willingness to make the conversion. For the season, fewer than 5 percent of all the transactions in that zone were conducted with gift cards. We were basically hitting 95 percent of fans with the cash-free message and by doing the simple gift card exchange, we were able to accommodate everyone.”

As part of the test in 2018, Levy’s hawkers working the stands used mobile devices equipped with a mini point-of-sale system supplied by tech firm Tapin2. Vendors record the transaction and hit the “total” button, which locks the screen, before passing the device to the customer, who swipes a card to complete the transaction. The device also has a tip button option.

Outside the ballpark, Tropicana Field’s parking lots are cashless, tied to custom software on smartphones produced by SpotHero, a tech firm that recently announced a long-term partnership with ParkHub. The system has the flexibility to accommodate multiple scanning technologies, Walsh said.

As the 2018 season progressed, the number of cashless transactions increased by a large margin as more fans got the message on the Rays’ initiative.

“We started last season at about 60 percent using cash, which was relatively high, actually,” Walsh said. “We ended the season at less than 25 percent cash in the building through the changes we made.”

Rays Fan Fest, which ran Feb. 9 at Tropicana Field, was the first facilitywide cash-free event since the announcement. The trend was similar to last season and fewer than 5 percent of attendees used gift cards, Walsh said.

“It’s a normal piece of business for people regularly attending events and buying tickets from Ticketmaster, StubHub and other ticket platforms,” Simons said. “Change is tough, but after a few times, it becomes seamless. The truth is, we can’t stop it. I respect them for doing it and I’m going to pay close attention and learn from it.”