REVIEW: Todd Snider at The Ramkat 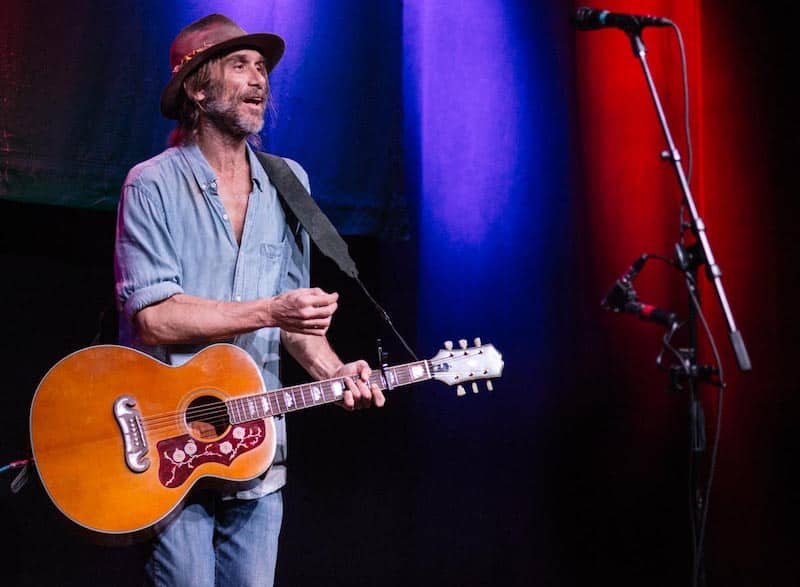 A True American Troubadour Mixes It Up At Winston-Salem Club

Snider recently rolled into Winston-Salem, North Carolina, with his 2022 American Troubadour Tour. It marked his fourth appearance at The Ramkat, a 1,000-capacity hall with a diverse weekly lineup of artists.

“Todd Snider is a fan favorite at The Ramkat, because he is an artist that brings the audience along with him on the ride through his song selection and between-the-songs stories,” said venue co-owner Andy Tennille. “It’s a very intimate experience, made all the more personal by how we set up the room when he performs. With individual reserved seats on the floor of the venue and reserved tables in our balcony, we try and transform The Ramkat into almost a small theater, which we think makes the space more conducive for an artist like Todd – who thrives on that connection and shared energy with the audience – to perform.”

Snider considers this his second tour over a three-decade career. He said the first one started when he debuted in 1994 and didn’t stop until the forced hiatus during the COVID-19. “Right as soon as it stared when I first went on the road, I never figured out a way to live off of it,” Snider explained. “I stayed out there. It was the only life I could do and it went that way for 25 years touring the whole time.”

Forced off the road, Snider discovered a creative outlet launching a weekly live stream following the loss of Prine, who died in April 2020 after contracting COVID.

“I had always told myself, when some of these people died, I was going to find a bar and go play their songs until I couldn’t do it anymore; and you couldn’t do that at the time,” said Snider, recounting how the weekly online series grew out of that loss. “To make a short story longer I went down and played Prine songs and that worked for me. It was like a dope addict who got to have his dope one day a week for a while playing on Sunday.”

On tour, Snider forgoes production bells and whistles — or a band. Authentic and unpretentious, he performs solo, with a guitar slung low on his hip, a harmonica around his neck and a sprawling delivery that held the Ramkat audience captive.

What Snider does is hard to explain. Imagine if humorist Will Rogers played guitar instead of twirling a rope or if counterculture comedian George Carlin wrote relatable tunes instead of social commentary. What Snider does is weave shrewd witticism around poignant songs drawn from real life.

Snider has said the only difference between being a freeloader and free spirit are three chords.

“I left home and became what I’d call a drifter, hitchhiker, sofa-circuit person. I didn’t have plans to be different,” Snider said. “Then I saw Jerry Jeff Walker sing and I had this epiphany. It didn’t look like playing the guitar was very hard and he was singing about the way I was living – and romanticizing it. My thought was that if I could do that, it would really improve my ability to get rides. You will pick up a guy with a guitar. Or let a guy who can sing stay a few days longer.”

Snider’s musical origin may appear slap hazard, but he is an astute craftsman. Before each show, Snider and tour manager Brian Kincaid review the set list from several previous visits in the market to make sure he isn’t repeating material or stories.

“I don’t know if people would believe this ‘cause I’m kind of a stoner, but I do this thing where before the show, I’ll sit down to make a set list, it’s ritually part of my night,” he explained. “And say I’m in St. Louis, I’ll look at the last three shows, the songs I played and the stories, and I’m not doing that again.”

After each show, Kincaid forwards the set list to Snider’s online archive, eighteenminutes.com. With set lists going back to 1995, there is plenty of material to draw from. Kincaid said there are roughly 100 songs written by Snider and another 20-30 covers that fans routinely ask for during a show and all of them “are on the table each night.”

Going into each performance, Kincaid loads the songs and story prompts into a teleprompter sandwiched between Snider’s stage monitors. But having a set list doesn’t mean Snider sticks to the plan. At the Ramkat, the audience yelled titles over each other’s shouts and Snider happily obliged.

The concert felt like a house party where all the guests know each other and Snider is at the center telling personal stories and getting all the laughs. Song requests could just as easily start with, “Tell the one about …”

Retired kindergarten teacher Elizabeth Setthemyer of Mooresville, North Carolina, became a Snider fan in 1998 when she discovered him in the liner notes of a Jack Ingram record. She’s a T-shirt wearing member of the Shithouse Wire, a Facebook group of 4,000 Snider fans. She has seen him numerous times in Nashville and Knoxville, Tennessee; Charlotte, Raleigh and Asheville, North Carolina; and Isle of Palms in South Carolina. Waiting for the show to start in Winston-Salem she said, “My husband asked me if I’m going to follow him forever. I told him, ‘Yes, I am!’”

He followed with “Just Like Old Times” about unexpectedly running into a former flame and a story about the days when he was a hungry busboy eating food the customers didn’t finish.

Memorable characters and life’s changing circumstances were presented with warmth and respect including the “Ballad of the Devil’s Backbone Tavern” and the good-hearted bartender Miss Virgy, an octogenarian who gave away more beer than she sold.

A song Snider wrote about the unidentified airline hijacker dubbed D.B. Cooper led into “Can’t Complain” with the uncompromising lyric “I got nothin’ to lose ‘cause there’s nothing to gain.”

The line between stories and songs was blurry and sometimes imperceptible ,including a nimble yarn about Moondawg’s Tavern, where Snider said he purchased his weed, and “Doublewide Blues” and what passes for life and entertainment in a trailer park — “Watching all this nothin’ goin’ on” – followed by Snider’s version of “Beer Run.”

The music industry wasn’t spared Snider’s sharp gaze and he told a story about needing a 10th song for a record and penning the sly “Money, Compliments and Publicity” in response. “I made it up possibly for all the wrong reasons,” he told the cheering crowd.

The laughs were frequent, but so were moments of real reflection including “West Nashville Grand Ballroom Gown,” which was released in 2012. “Father had money and her mother had love. Channeled entirely to her dear sister Dove. Twenty-two years in society’s plan was cancelled in the swing of her dear mother’s hand,” Snider sang of the story of a hitchhiker too close to Nashville for comfort.

Snider had already name-checked many of his heroes before telling a story about Jimmy Buffet. “I’m just bragging now,” he said grinning.

He performed “Rose City” and the 1975 Rusty Wier classic “Don’t It Make You Wanna Dance” before telling a story about being in the right place at the right time, when the bandleader K.K. Ryder was knocked unconscious by a flying patron and Snider stepped in.

Billy Joe Shaver’s “Ragged Old Truck” was a fan request and Snider followed with “Alright Guy” from his debut 1994 record Songs for the Daily Planet. Snider ended the set with stories about his north star John Prine, and a tribute he released in 2021 “Handsome John.” After leaving stage, Snider returned for an encore with Jerry Jeff Walker’s “Mr. Bojangles” and the “Better Than Ever Blues, Part 2.”

Many of the songs Snider performed at The Ramkat are included on his latest release Live: Return of the Storyteller, which was recorded when he started touring again after restrictions were lifted. The album is his third live recording and 19th overall with 27 tracks, culled from his best road performances. “I don’t give it a lot of thought and then I second guess it later when it’s over,” he admits.

He said what they captured was the emotional response that accompanied the return of live music.

“The first one when I came out, it was like the Beatles and all of a sudden everybody was hugging each other,” Snider recalled. “I realized, they aren’t cheering because it’s the normal I’m coming out and they’re clapping, it’s because we are having a moment here.”

Along with the release of Live: Return of The Storyteller, Snider’s songs continue to be celebrated across the spectrum of music and arts. Filmmaker Justin Corsbie took inspiration from the lyrics of Snider’s “Just Like Old Times,” and turned the tune into Hard Luck Love Song; a full-length feature film released theatrically last fall. Snider was recently inducted into his home state’s Oregon Music Hall of Fame and his “Talking Reality Television Blues” was covered by Tom Jones on an album of work from his favorite songwriters.

Through it all, Snider continues to shine a light on the generation of troubadours who came before him and toured this year with Ramblin’ Jack Elliott and Ray Wylie Hubbard, as well as the next generation including Lilly Hiatt and Tommy Prine. Arlo McKinley opened for Snider. In July, McKinley released his third record This Mess We’re In or Prine’s record label, Oh Boy Records.

“Those guys, I would compare it to the mafia,” Snider said of the advice he received from his beloved mentors. “Guy Clark, I would call the consiglieri, but all of them John, Jerry Jeff, would tell you, there are going to be people coming up behind you and there are rules around it and you follow them – they are family, no matter how jealous you get.”