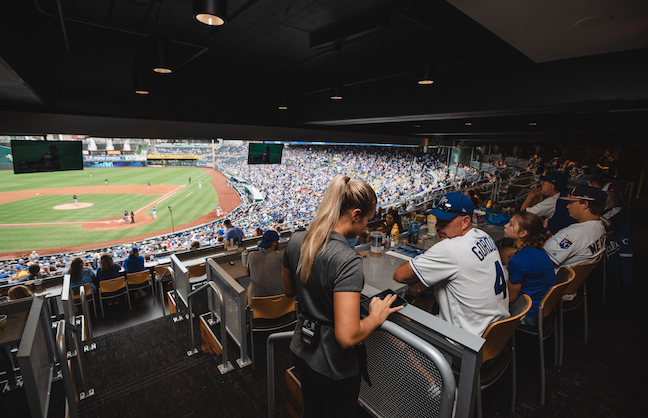 The diamond club seats, among the best in Kauffman Stadium, are situated behind the Crown Club, which is next to the field. (Courtesy Kansas City Royals) MLB team selling 11-game plans for premium area behind home plate For the first time since the Konica Minolta Diamond Club opened at Kauffman Stadium in 2010, Major League Baseball’s Kansas City Royals are selling 11-game mini season ticket plans for those seats. The club is a three-tiered section of 775 seats behind home plate that sits behind the Crown Club, the premium seats closest to the field. Diamond club seats, as they are known generically, are among the most lucrative seats in baseball because of their location, and most MLB teams sell them in full-season and half-season ticket plans. In Kansas City, though, the Royals have seen some attrition four years after winning the 2015 World Series. They had a rough 2018 season, winning […]
To access this post, you must purchase Subscribe to VenuesNow – 1 Year, Subscribe to VenuesNow – 2 Years or Subscribe to VenuesNow – 3 Years. If you are already a member of VenuesNow, please login here: log in